This 60-second cleansing rule gets rid of oil plugs and blackheads right before your eyes! Here’s how to do it 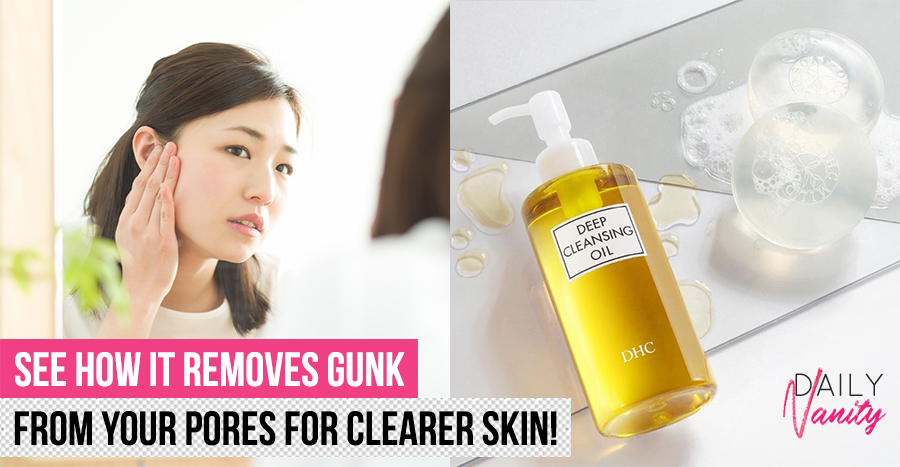 Catapulted into mainstream beauty by Charlotte Cho of Soko Glam, the double cleanse is now a well-known two-step cleansing method. You know the drill. First, you use an oil-based cleanser on dry skin, rinse that off, and follow up with a water-based cleanser. The first step gently breaks down makeup, sebum, and sunscreen, while the second step washes away sweat and dirt.

Airborne bacteria and pollution can sit on the surface of your skin too, which can potentially lead to premature skin ageing, pigmentation, and breakouts if you don’t wash your face properly at the end of the day. The double cleanse takes care of all of that, and it’s one of the easiest ways to prevent clogged pores and acne.

However, not everyone achieves clearer, brighter skin that the double cleanse promises. If you’ve been going through the two steps diligently every night but have yet to see a difference in your complexion, it may be due to the duration of your cleansing routine.

Recently, we learnt about the 60-second rule, which was created Nayamka Roberts-Smith of LABeautyologist. The esthetician frequently tells her Twitter followers and YouTube audience to cleanse their skin for 60 seconds – and it’s a game-changer, you guys.

What is the 60-second cleansing rule?

On Twitter, Nayamka broke down her reasons for the original rule. According to her, massaging an oil-based cleanser or balm on your face for 60 seconds gives the ingredients sufficient time to get to work.

Cleansing for a minute would help to soften the skin, dissolve sebum blockages, and break down all the pollution and grime from the day. You might even be able to see sebaceous filaments and blackheads on your hands when you’re done!

Taking 60 seconds also makes you pay attention to your skin and what you’re doing. It lets you take time to cleanse around the edges of your nose, under your chin, and around your hairline. When you take your time, your cleansing routine can be a part of your self-care ritual too.

In our busy lives, face washing is often done as an afterthought in the shower, but this beauty hack serves as a reminder to take care of ourselves. A facial massage every night is a great way to unwind, especially after a long, stressful day.

And here’s another reason to try the method: Products work better on skin that’s been cleansed thoroughly. So if you’ve splurged on serums and fancy potions, this is a good way to make sure they don’t go to waste!

Trying out the 60-second rule

As a double cleanse enthusiast (seriously, even his podcast with his twin brother is called The Double Cleanse), skincare YouTuber James Welsh also gave the 60-second rule a go. Though he wasn’t able to see an alarming amount of oil plugs, he was still able to pull up a couple of sebaceous filaments.

Redditors have also seen a huge improvement in their skin texture and clarity with this method. In fact, it’s earned the hashtag #60secondrule and has culled a following of devotees who swear by it. One Reddit user said, “I’ve been doing this for about a month now and I have noticed the following: no more forehead bumps, softer skin texture, [a] significant decrease in pimples, and a definite glow!”

Related: 20 most incredible before-and-after photos of Redditors and the routines that transformed their skin

So instead of picking up a new vitamin C serum or chemical exfoliant, try massaging your skin for one minute with the cleansing oil you already own. If you’re new to double cleansing, we’ve gathered 15 cleansing oils to kick off your evening routine with the 60-second rule.

Cleansing oils for the 60-second rule 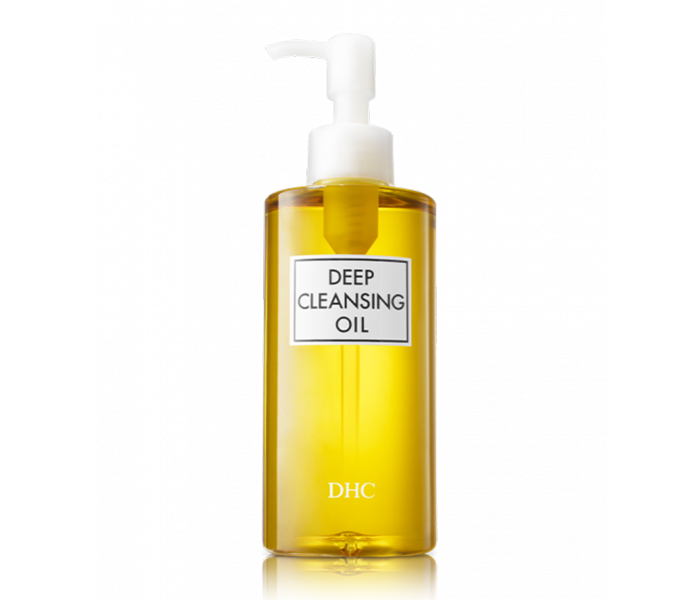 There’s a reason why DHC’s Deep Cleansing Oil comes highly recommended by both Nayamka and James. Waterproof mascara, liquid liner, and even stubborn liquid lipstick don’t stand a chance against this cleansing oil. It contains antioxidant-rich olive oil that removes makeup gently and thoroughly, as well as a hint of rosemary oil to decongest oily skin.

Its silky-smooth texture feels luxurious as you glide your fingers across your face, so we won’t blame you for turning the 60-second rule into the 240-second rule. Your skin will be left clean, but neither tender nor taut. No wonder a bottle of it is sold every 10 seconds worldwide. 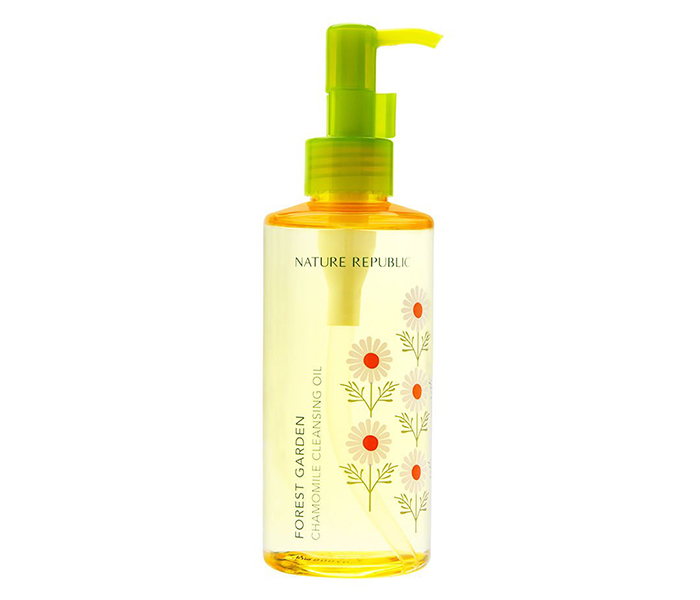 Chamomile tea is known to soothe our senses and help us unwind, but it also does a great job at calming down any skin inflammation. The Forest Garden Chamomile Cleansing Oil is a convenient, one-step oil cleanser that melts away heavy makeup as well as dirt and impurities.

The lightweight formula is infused with jojoba extract that’s kind to your skin, so your face won’t feel tight and zapped of its natural moisture. What you’ll be left with is a fresh, radiant complexion. 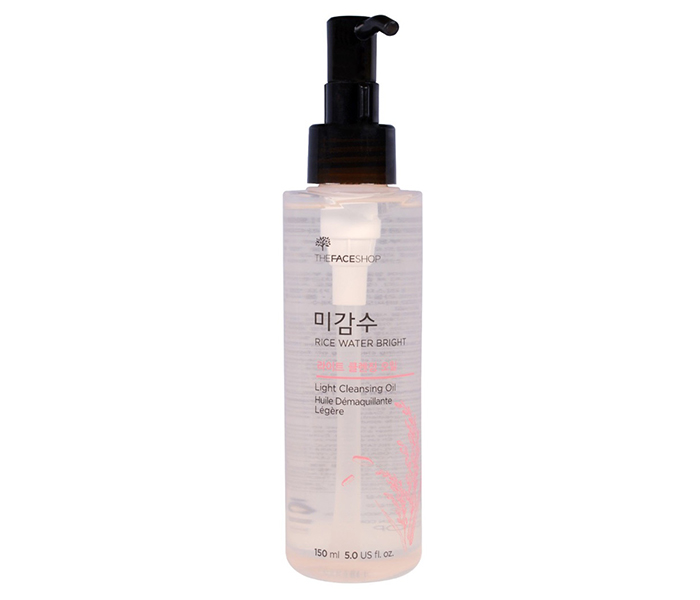 A product that’s been highly raved about in Korea for years now, THEFACESHOP’s Rice Water Bright Light Cleansing Oil is a refreshing one to use in our humid climate. It has a water-based formula that’s made up of mooring oil and rice water. Together, they cut through grease and dirt to purify and detox the skin without leaving a sticky, heavy feeling behind.

If you’re looking to remove blackheads fast, this formula can help you with that. Be sure to concentrate on congested areas like your T-zone when you massage your skin with it. This Light version is perfect for those with combination or oily skin. 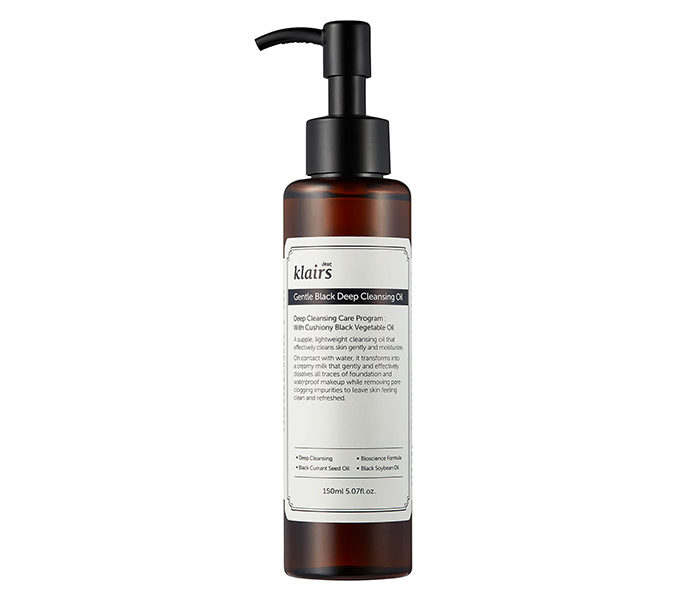 If you’re a K-beauty enthusiast, you’re probably familiar with Dear, Klairs’ Gentle Black Deep Cleansing Oil. Some of the star ingredients you’ll find in this one include black sesame oil, black currant seed oil, and jojoba seed oil. This nourishing, anti-inflammatory blend draws out impurities from the skin to keep it looking fresh and plump.

It’s made without alcohol, artificial colouring, and fragrances, so it’s safe for those with sensitive, reactive skin. 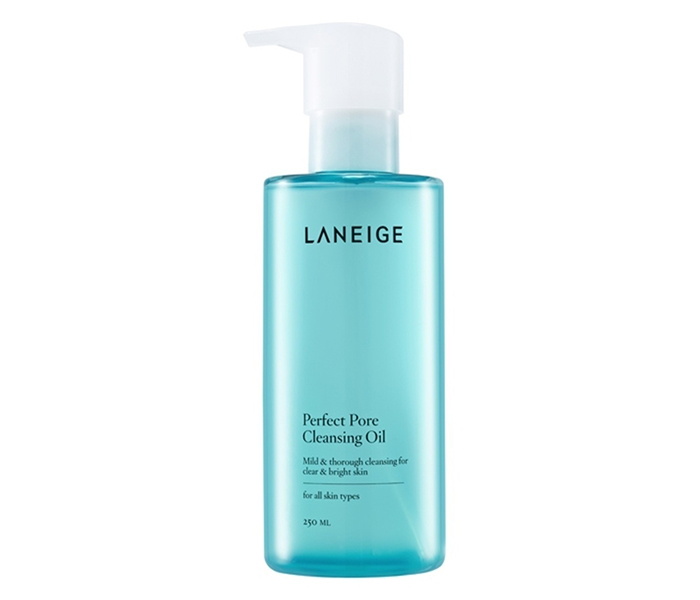 Even the heaviest, waterproof makeup doesn’t stand a chance Laneige’s Perfect Pore Cleansing Oil. This formula cleanses the skin thoroughly, lifting away makeup and impurities as it emulsifies. Natural virgin coconut oil breaks down dirt and grime, while mugwort extract has antibacterial properties to purify pores.

The best part? It’s formulated without mineral oil, which means it’s gentle enough for all skin types and won’t clog any pores.

Laneige Perfect Pore Cleansing Oil (250ml) retails for S$45.50 at all Laneige stores and counters, as well as Althea. 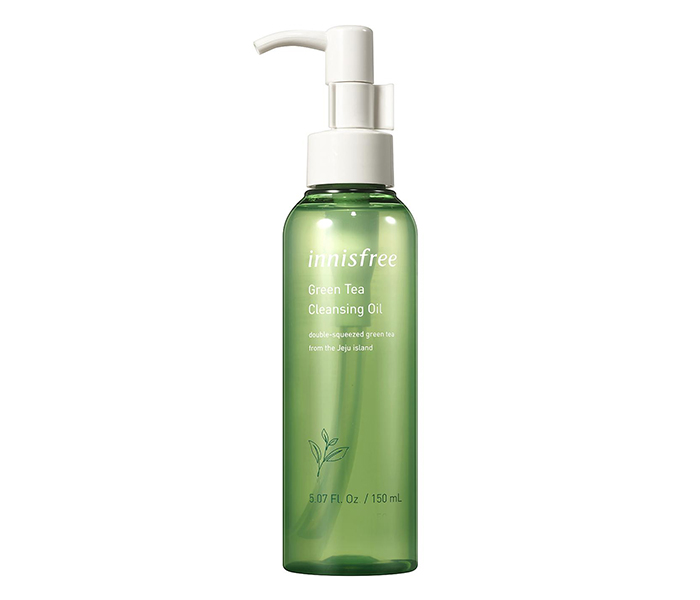 If you like a cleansing oil that smells crisp and citrusy, this one’s for you. For those with more sensitive skin, however, you may want to give this a miss. 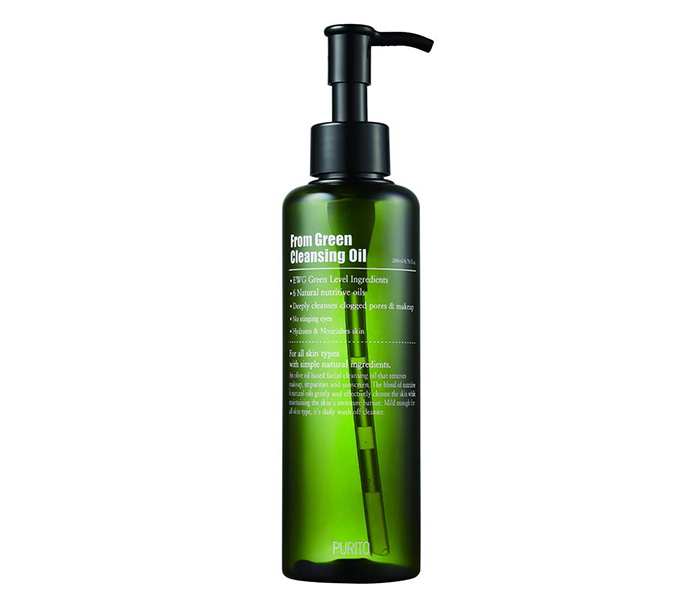 Purito is a Korean brand that’s known for its sunscreens, but it also has a great cleansing oil in its product lineup. The From Green Cleansing Oil is a gentle, fragrance-free one that removes every last trace of sunscreen and makeup without causing irritation.

It’s made with olive oil, sunflower seed oil, jojoba seed oil, sweet almond oil, and grape seed oil to moisturise the skin. Once you emulsify and rinse it off, your skin will feel soft and smooth like a baby’s bottom. 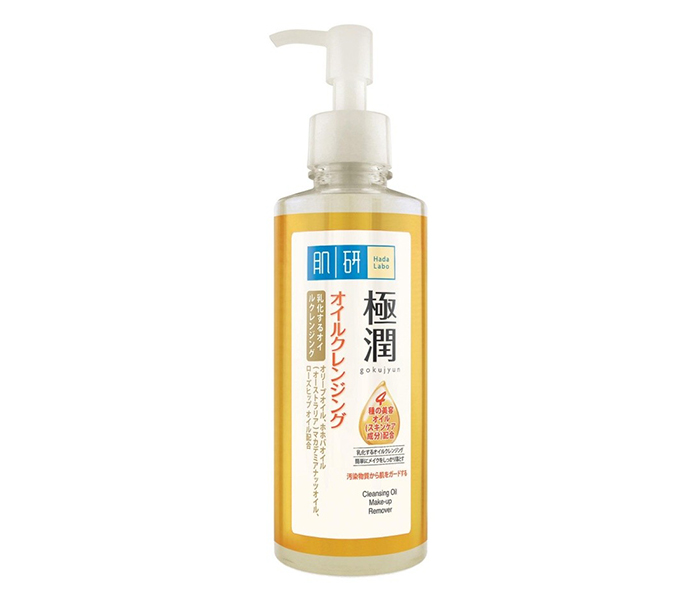 If you prefer a lighter cleansing oil, try Hada Labo’s Gokujyun Super Hyaluronic Acid Hydrating Cleansing Oil. It’s formulated with olive oil to remove excess oil, dirt, and makeup, but it doesn’t feel heavy at all. In fact, it has a thin, silky consistency that glides over the skin easily.

It also contains hyaluronic acid to hydrate and maintain the skin’s moisture balance, so you face will feel soft and smooth even after you’ve cleansed. There are no fragrances, mineral oil, alcohol, or artificial colourants in this – good news for folks with sensitive skin. 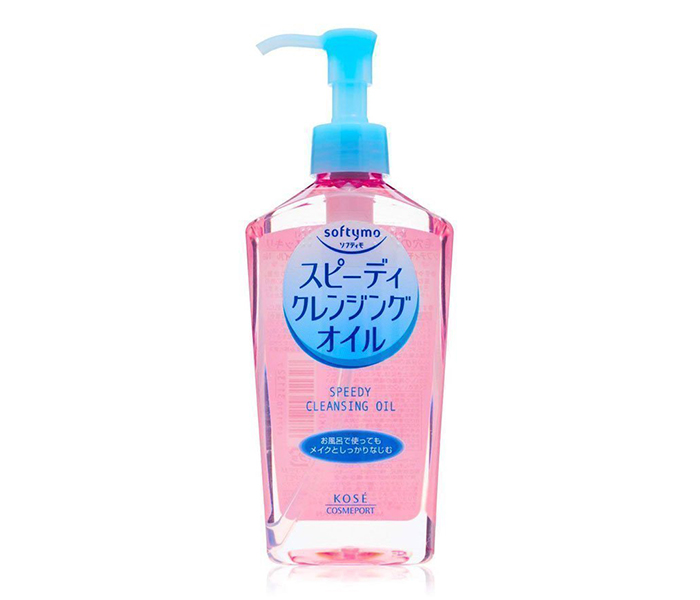 There’s an added touch of shea butter in the formula to keep your skin moisturised and supple without leaving any oily residue behind. This gentle cleansing oil is particularly ideal for those with dry skin as it nourishes and protects. 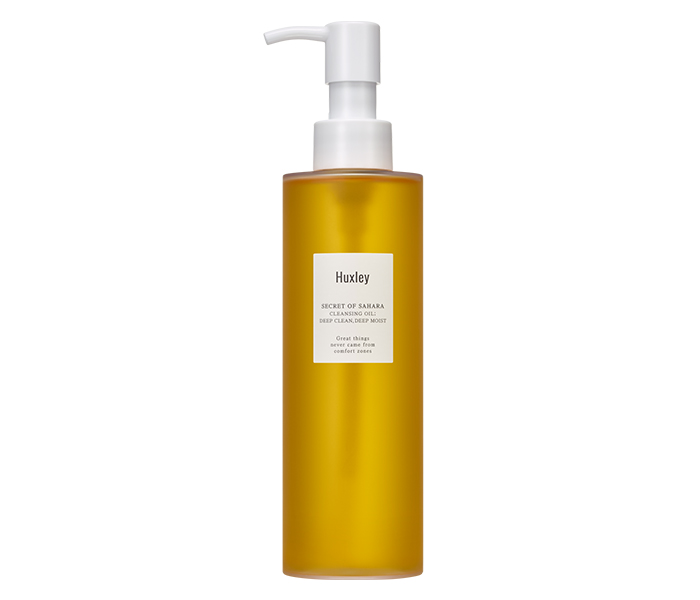 Known for its moisture-binding properties, prickly pear cactus is the star ingredient in Huxley’s Secret Of Sahara Cleansing Oil. High in antioxidants, the formula contains prickly pear seed oil, cactus extract, sea buckthorn oil, and calendula flower. These work together to hydrate and protect the skin against free radical damage.

The soothing cleansing oil removes dirt and impurities lodged deep within your pores without stripping your skin of its natural moisture. It’s non-comedogenic too, which means it won’t clog your pores. You can read our editor’s and readers’ reviews here. 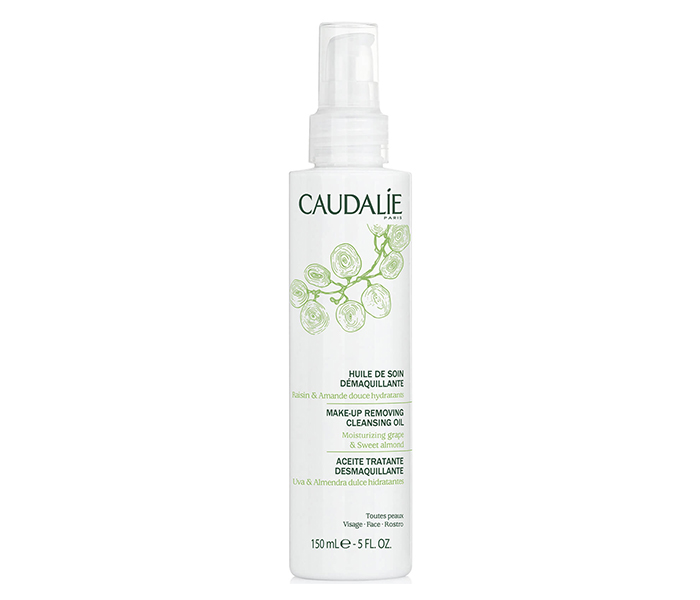 If you’re a nervous newcomer in the world of cleansing oils, don’t worry. Caudalie’s Make-up Removing Cleansing Oil is made with a light blend of plant oils that remove makeup and emulsify easily. This gentle formula is especially ideal for skin that’s sensitive or stressed.

Made with natural ingredients, it contains sweet almond oil and grape seed oil to soothe irritation and keep your skin in tip-top condition. 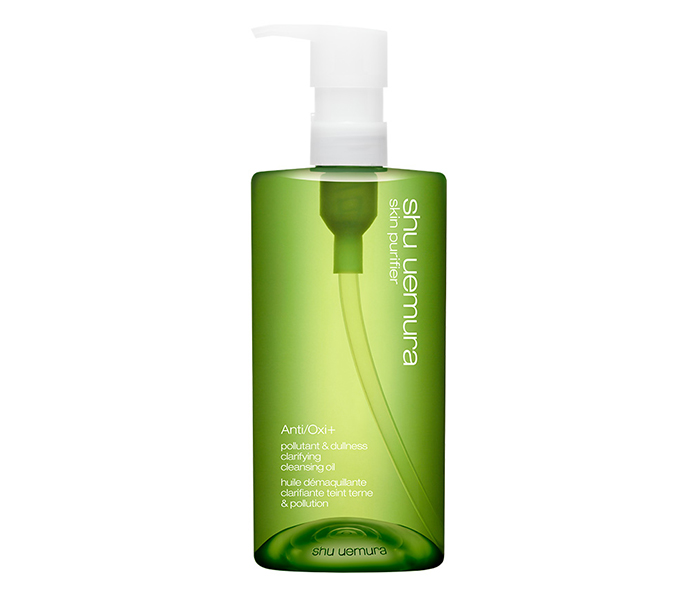 When it comes to cleansing oils, Shu Uemura is a go-to brand for many. While there are plenty of variations to choose from, we’d like to turn your attention to the Anti/Oxi+ Pollutant & Dullness Clarifying Cleansing Oil. This variant breaks up waterproof makeup easily and leaves your skin feeling smooth and looking healthy.

The formula relies on a trio of natural extracts. Antioxidant-rich green tea soothes irritation, moringa removes harmful pollutants, while papaya brightens your overall complexion. On top of that, Japanese camellia and Korean ginseng boost moisture to keep your skin soft and bouncy. It also has a relaxing scent that will lull you into a peaceful state during your cleansing ritual. 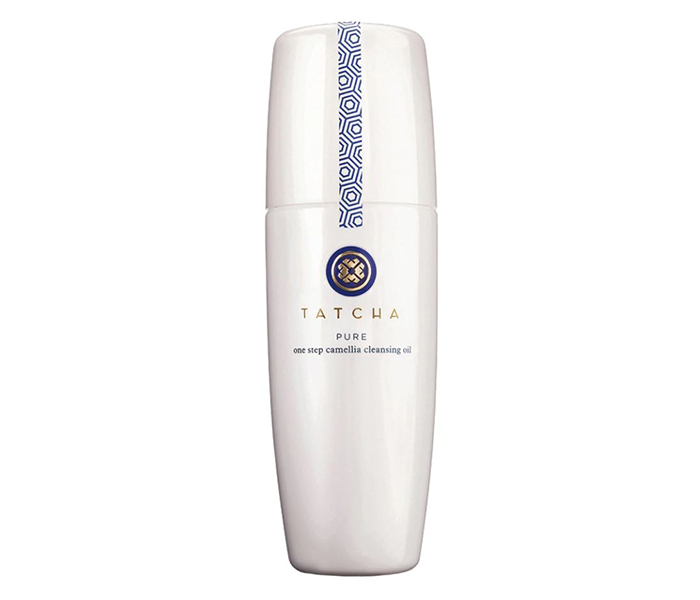 Taking a page from a geisha’s beauty routine, Tatcha’s Pure One Step Camellia Cleansing Oil removes makeup and impurities while keeping dryness at bay. It’s enriched with camellia oil, which is filled with nourishing fatty acids and vitamins to cushion and comfort your skin.

The cleansing oil helps to fortify your skin barrier too, so it won’t strip your skin of its natural moisture when you rinse it off. With continued use, you’ll notice a healthier glow and fewer fine lines. 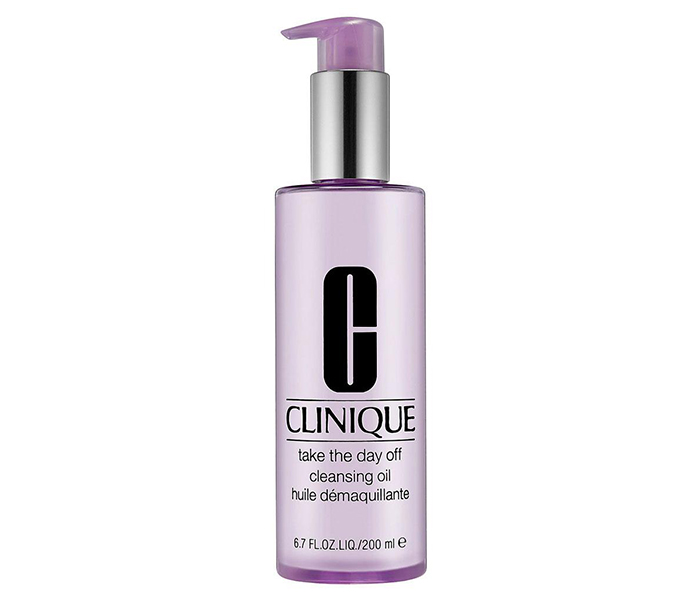 You can count on Clinique’s Take The Day Off Cleansing Oil to keep your skin hydrated after you’ve washed your face. The light formula will leave your skin feeling clean and balanced, no matter your skin type. A little goes a long way with this cleansing oil, which is why reviewers say that it’s well worth the price. It’s completely fragrance-free too – a blessing for those with skin sensitivities.

Clinique Take The Day Off Cleansing Oil (200ml) retails for S$52 at all Clinique counters and Sephora. 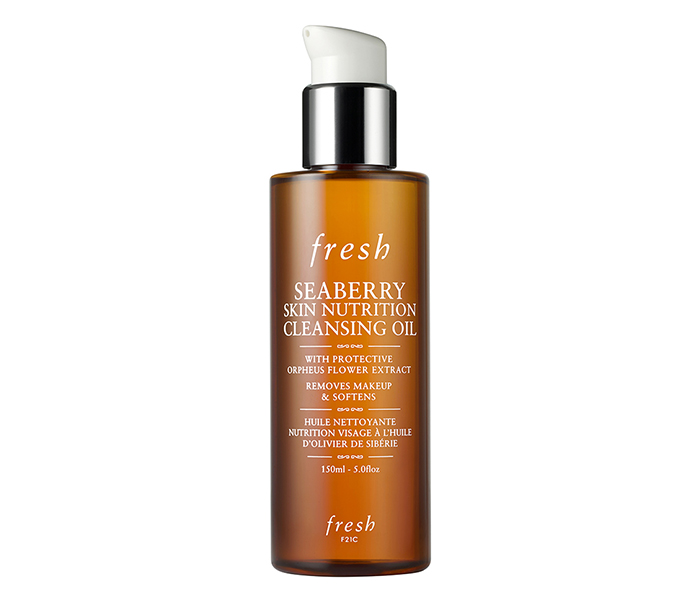 Seaberry oil, better known as sea buckthorn oil, is high in moisturising omega 3, 6, 7, and 9 fatty acids to soften and protect the skin. You’ll find Orpheus flower extract, camellia seed oil, and grapeseed oil too, which make it a luxurious experience when you follow the 60-second rule.