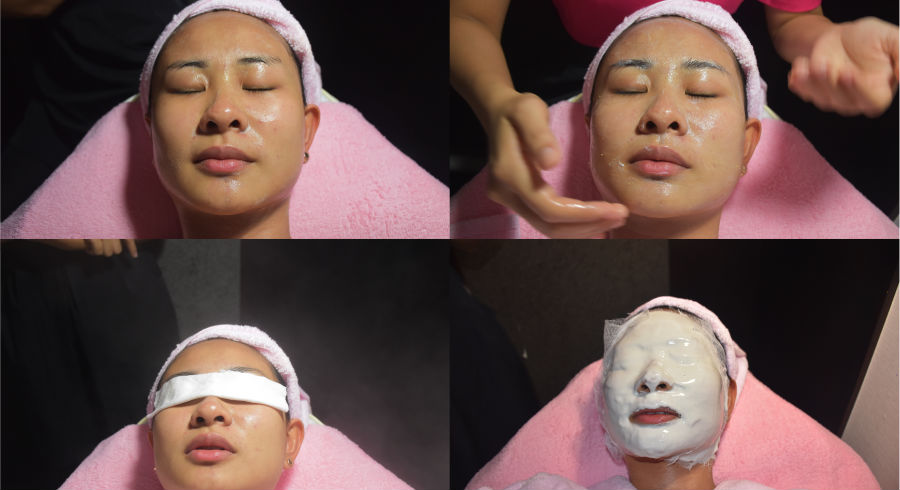 Going for a facial should be a relaxing experience. This means not having to worry whether this session is going to make you broke for the next month, or thinking of how to dodge the salon’s aggressive promotion of their packages. Comfort in the pocket and mind – that’s how it should be. Salons like these have become increasingly rare, but I would like to believe they still exist. Castelle de Beauté is just a stone’s throw away from Jurong MRT station, and prides itself for crafting customised treatments to target their clients’ specific skin conditions or problem areas. They only use award-winning products imported from Europe to do so, such as Atache that hails from Spain. The Atache products Priscilla recommended for my dry and clogged skin.

Their premises include one consultation room, eight treatment rooms, a dressing room, restroom, shower, and lockers. It was decorated simply. But despite having been in operation for since 2013, everything was clean, dry and well maintained. While I signed up for a customised facial treatment, no consultation was conducted. Instead, I was greeted by the owner, Priscilla, and had a casual chat about what I’ve been up to lately, my lifestyle, and what facial products I am currently using. Sipping on my cup of warm, comforting red date tea, it only occurred to me on hindsight that Priscilla was collecting information about my skin condition to suggest an appropriate therapy for me.

Priscilla suggested an intense hydration therapy; after being in Shanghai for the past five months, my pores were undoubtedly clogged from the pollution and almost peeling from the dry winter air.

My therapist started off with removing my makeup by applying an oil-based cleanser, and gently rubbing in circles. People who know me can all attest that I am big on my eyeliner, but because I have extremely oily eyelids, I pile on tons of primer, loose powder and the hardiest liquid eyeliner to achieve my daily look, which stays on forever. I was impressed with this unassuming cleanser that removed all my makeup without any aggressive tugging at my skin. From left to right, top to bottom: after removing my makeup and cleaning my skin, applying a yoghurt scrub, having my eyes covered during the steaming process, and having a hydrating mask on.

After double-cleansing my face with a soft cleanser and yoghurt scrub, a steamer was applied to open my facial pores and prep them for extraction. Needless to say, my face was a minefield of blackheads that took my poor therapist thirty minutes to clear. With her slightly cold and gentle fingers, I actually fell asleep during the extraction process! For someone with a non-existent pain tolerance, this was a great deal. My therapist was considerate enough to keep count of how many ‘bombs’ she had extracted, and how many remained ‘buried’ and where, so I can inform the next therapist who does an extraction for me.

Then came the star of the hydrating treatment: the Azulene ampoule. Rich in collagen, it helps to build up future resistance against clogged pores from dirt in the air. The ampoule was applied using an ultrasonic device, which vibrates five times a second to help your skin absorb all the Azulene faster and better. The session ended with a hydrating mask and such a comfortable head massage, I was almost reluctant to leave!

Despite the intense extraction session, it actually left no marks, redness or swelling on my face at all! This I can only credit to my skillful therapist. Approximately a week after my session with Castelle de Beauté, my skin is definitely less dry.

Although my face felt plump from moisture, it was only expected after coming fresh out of any hydrating treatment. However, I was pleasantly surprised to find the effects lasting slightly more than a week, before more or less returning to its original condition. This is rightfully so, as my therapist had recommended her clients with facial issues to come in for a treatment once every two weeks, before lowering the frequency when they start to heal. Rome was not built in a day, and neither should good skin.

Castelle de Beauté is not a place you step in for the ultimate pampering session. But as my experience has shown, it is a homely salon that does the job well, and is comfortable for both my mind and pocket.

is located at 133 Jurong Gateway Rd, Singapore 600133, a 5-minute walk from Jurong East MRT station. To make a booking or to have any queries answered, you may reach them at 6563-1131.
Topics:
atachecastelle de beautéfacialreviewtherapytreatment