Dyson Supersonic Hair Dryer Review: Is it worth the hefty price tag? We previewed and reviewed it 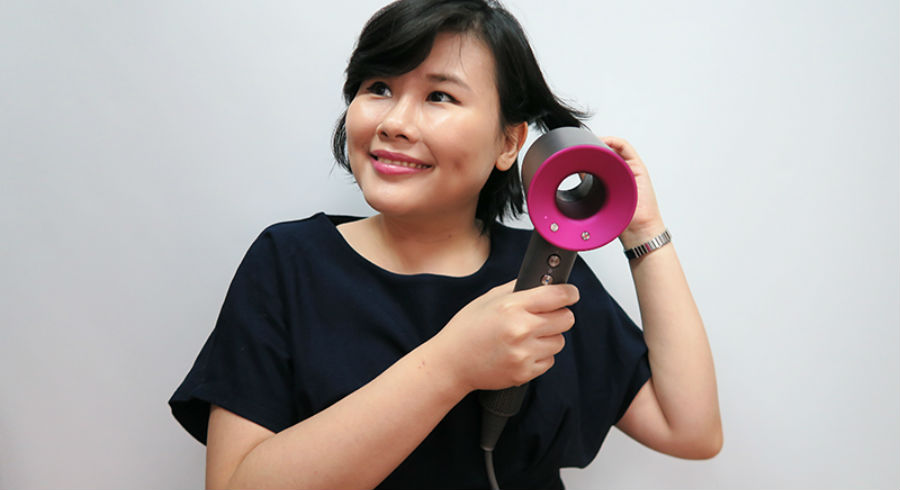 Even before Dyson has officially launched its first-ever hair dryer, the Dyson Supersonic in Singapore, the beauty world is already abuzz about its arrival. After all the brand that’s probably better known for their vacuum cleaners and fans has invested £50 million into the development of this new hair drying technology, and has tested over 1010 miles of real human hair as part of the development.

Powered by the patented Dyson digital motor V9, which is the pride of Dyson engineers in this project, the Dyson Supersonic looks like it’s poised to disrupt the image of what we think conventional hair dryer should be like. Dyson claims that the V9 motor is eight times faster than the usual motor used in typical hair dryers, but at only half of the weight.

While the engineers give one another high fives for every Physics breakthroughs they’ve set out to achieve, what really matters to us is whether a consumer is going to get a lot more mileage from the Dyson Supersonic compared to the hair dryer they are familiar with. We put the hair dryer to a one-week test and tell you how we like it.

1. It is a lot lighter than typical hair dryers There’s a significant difference in size. Size of the two hairdryers after attachments are on.

Equipped with intelligent heat control, the Dyson Supersonic makes sure your hair is not exposed to excessively high temperature, which can damage your hair in the long run. It works by having a glass bead thermistor measure the temperature delivered to your hair 20 times a second. This information is transmitted to the microprocessor, which controls the double-stacked heating element to keep the temperature in check all the time.

I have relatively sensitive scalp and usually find the heat from hair dryer very unbearable after a while. I typically have to take breaks in between the hair-drying process in order not to suffer from the extreme heat. The Dyson Supersonic didn’t give me this problem at all. The temperature indeed maintained at a hot enough level to dry my hair, but never heating up to a point where I feel pain.

And you know how conventional hair dryer can burn you if you touch the nozzle immediately after you’ve switched it off? I never felt that with the Dyson Supersonic. There was never a point I felt that it was over-heating. It remained quite cool throughout my usage.  This innovative hair dryer also comes with magnetic attachments that you can put on and remove easily to enhance your hair-drying or styling process. All the attachments are magnetic.

3. It is quieter than conventional hair dryers

It would usually be impossible to have a decent conversation over the hair dryer. You’ll probably notice the awkward conversations you’ve had with your hairstylist while he’s trying to make small talks while drying your hair. The Dyson Supersonic still makes a whirring sound, but it is significantly softer than conventional hair dryers.

Decide for yourself if it’s significantly quieter.

This is how the Dyson Supersonic sounds:

This is how a conventional hair dryer sounds:

I learnt that Dyson aero-acoustic engineers have simplified the pathway of air flowing through the hair dryer, so that turbulence and swirling are reduced. At the same time, they increased the blades of the motor impeller so that the sound frequency within the motor is increased to a level that’s not audible to humans. On top of these, the V9 motor is embedded in the handle (instead of the head like in the cases of conventional hair dryers), and surrounded by acoustic silencers so sound is further reduced.

Don’t for a moment think that the reduced sound means the hair dryer is slower than conventional ones. While louder sounds are usually associated with stronger airflow, I was impressed by the Dyson Supersonic, which delivered a very good airflow despite being so quiet. (I’ve explained in the earlier point how it manages to do so without compromising on speed.) While I usually need approximately 10 minutes to dry my short bob thoroughly, I now can take just two minutes to get the same job done. This is perhaps the most attractive part of the Dyson Supersonic to me. I find styling with the Dyson Supersonic easier too. It is likely because I was more able to manoeuvre it better since it was lighter, and also because I could get the nozzle closer to my hair because it doesn’t heat up excessively.

The Dyson Supersonic lives up to the hype that surrounds it; this is definitely not just hot air! If you want to say goodbye to tired arms and spending too much time on hair-drying or styling, this is an investment for more efficiency. Its sleek and more petite size also looks better on your vanity table, and some of us may be willing to fork out a little more for more convenience and style in our lives.

The Dyson Supersonic hair dryer arrived in Southeast Asia, making Singapore its first stop. It will be available from 5 August at all major department stores and electrical multiples at SGD599.