Reviews of Crayola lipstick, KFC nail polish and other non-beauty brands that launched their own beauty products We often side-eye products churned out by non-beauty brands, but surely there has at least been once when you have asked yourself, through the skepticism, of whether they may actually be worth a shot.

Or maybe the cute packaging or very wallet-friendly price tags has already stolen your heart and you just want a little push (in the right direction!) on whether or not to get them.

We scoured the Internet for seven non-beauty brands who’ve launched their own beauty products – from the ridiculously cheap but really good, to the downright gimmicky PR stunts from said companies. We know what you have to be thinking: Crayola? That Crayola? Yes, the crayon brand, Crayola, undoubtedly, a classic childhood favourite amongst many of us.

Crayola has released a huge range of items, from lip and cheek crayons (SGD16.03) which can also be repurposed into an eyeliner and eyeshadow as well, to multi-coloured mascaras (SGD17.81), to shimmery highlighters (SGD19.59), and even palettes (SGD32.06) for the eyes, lips and face.

Hoo-boy. That’s a lot of stuff!

The general consensus? The lip and cheek crayons were apparently pretty waxy, and, well, crayon-like. Well, it is a crayon brand. That being said, the palettes were surprisingly well-received, having a good amount of pigment, according to JeffreeStar‘s review on Youtube.

P.S. They’re also vegan and cruelty-free, which is a bonus in our books! Ben & Jerry’s have their own line of lip balm, and they’re exactly as you would imagine it – ice-cream flavoured, and comes in four flavours: Mint Chocolate Cookie, Chocolate Chip Cookie Dough,Chocolate Fudge Brownie, and Strawberry Kiwi Sorbet. We reported about these Ben & Jerry’s flavoured lip balms some time ago, and DV readers simply went crazy over then.

The verdict: moisturises well, and smells heavenly, but pricey for its size, according to a blogger online. Also, you might be interested to know that they are made with organically derived oils and other natural ingredients.

Unfortunately, these oh-so-adorable and delectable lip balms are not available in Singapore (as of yet – hey, we can dream!) and retails in limited places only in the USA at USD 4.

DV says: If you have a friend travelling to the US and you’re a huge fan of yummy smelling (and tasting) lip balms, then yes, get it, and we’ll just be over here, secretly but not-so-secretly envious of your ice-cream flavoured lip balms.

For more details, check out our overview of the Ben & Jerry’s Lip Balms! Daiso has you covered for each and every of your budgeting needs at a paltry price tag of SGD 2 – from little knick-knacks to kitchen appliances to…makeup?

That’s right, Daiso has its own line of makeup too. And yes, it is SGD 2 per pop.

Sounds a bit too cheap to be true?

The verdict? Very hit or miss, with some hidden finds such as the eyebrow pencil, and the highlighter, which was fairly pigmented and raved about by the staff here at Daily Vanity.

The miss? Base products like the foundation and concealer only come in one colour, and even then, still not that great and applied patchy, from DV‘s own review on it.

Check out our review of five Daiso makeup items here:

DV says: That being said, we feel that this should be good for beginners, as products are fuss-free, and easy to use, with tools already provided for such as their eyeshadow spoolie.

Also, don’t be too quick to dismiss it just because it might seem too cheap; as we found out, there were indeed some hidden gems in there!

By the way, you should also know that a few of Daiso’s cosmetics products have been recalled after they’ve been found to contain cancer-causing ingredients. Daily Vanity broke the news about this some time ago and you can read all about it.

Do you love pizza so much, you want to eat it, be it… smell like it? Introducing Eau de Pizza Hut, the chain’s… perfume, which is, well, exactly what it says it is.

(And yes, it really is called Eau de Pizza Hut, not something we just made up.)

Fittingly created from a joke about bottling the smell of fresh pizza, the managers of Pizza Hut said fans can expect the perfume to smell like “a box of pizza just opened”.

The verdict? According to an international reviewer on Huffington Post, it smells like “dough, without the cheese and tomato”, likening it to smelling like “cinnamon rolls”.

And also, apparently quite pleasant-smelling.

Which, we suppose, is already much better than expected.

Unfortunately, this Pizza Hut perfume is only available in Canada and the USA, but we could always cross our fingers and hope it comes onto our sunny shores some day!

DV says: Have a friend who’s travelling or is currently in the US or Canada and just love the novelty factor? Why not.

But if you’re looking for a real perfume to dazzle on a first date? We’re sure you don’t need us telling you, but nah. Sorry, Pizza Hut, but we’re going to have to pass on the perfume! 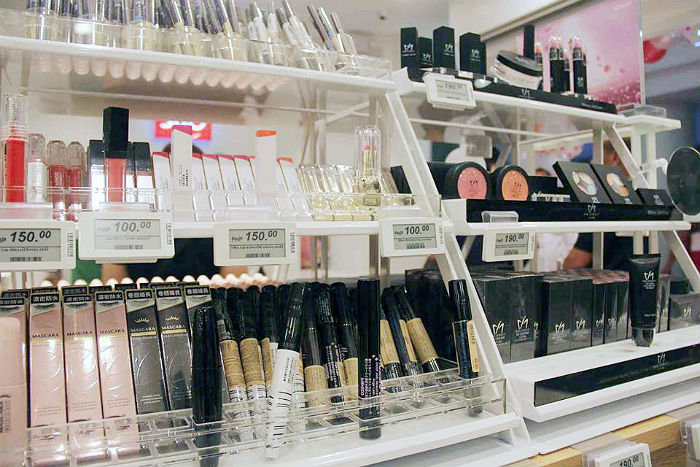 Miniso is another household brand known for its huge array of affordable items, sort of like the sister store to Daiso.

And, like Daiso, Miniso also sells its own range of beauty products at an affordable price tag, not being one to lose out to its rival.

The verdict? Pretty hit or miss as well, but seems like it at least fares better in quality, as compared to Daiso, when the DV team tried it out.

So which products performed well? The standouts were the mascara (SGD4.90), which performed pretty well at elongating the lashes, the eyeshadow quads (SGD4.90) performed well too, was pigmented, and easy to blend out, as well as the brow pencil (SGD3.90), which applied well and had a good amount of pigment.

That’s a pretty decent range of things that did well, we’d say!

Which were a flop? The electric face cleansing massager (SGD12.90), which completely failed to foam up the cleanser, and perhaps the lipsticks, which came out patchy in some colours.

Check out our videos below to see these products in action!

DV says: If you’re just getting started on your makeup journey – we think that Miniso isn’t too bad a place to start at, considering that most of the products are of pretty decent quality, if not, a bit limited in range.

If you’re already a bona fide makeup junkie – we think the eyeshadow quads aren’t too bad to have, and especially at such a cheap price at SGD 4.90, it’s basically a steal.

Could you think of a more unlikely collaboration? We think this Sanrio X Sephora makeup collaboration takes the cake, by far.

An unlikely pairing they may be, but man do we regret doubting this, with its gorgeous packaging, we feel that this may even motivate non-makeup wearers to start buying makeup!

Pretty packaging aside, but how does it actually fare as makeup?

Apparently, not so well, according to bloggers online who managed to get their hands on this limited collection on time. While the eyeshadow palette comes in a gorgeous array of 30 colours that is sure to perk any eyeshadow junkie’s attention, the colours, when applied fall flat – application was powdery and chunky, and colours were not very pigmented. That being said, not bad by any means, but perhaps not worth the very upscale price.

Unfortunately for Hello Kitty fans, this collection has been discontinued at Sephora, BUT, you can find it on eBay, if you really want to get your hands on it.

DV says: We say get it if you’re a huge Hello Kitty fan. The makeup quality may not be super up there, but if you’re willing to look past that, why not?

Alternatively, you could get the Hello Kitty merchandise like the rhinestone mirror, if you’d rather keep your makeup as makeup, but still want to show off your support for the Hello Kitty franchise in some way.

P.S. Do make sure to check the legitimacy of the eBay vendors online before making your purchase! If you thought Pizza Hut’s perfume was extra enough, get a load of this – edible chicken flavoured nail polish by KFC.

We know that they’re famous for their tantalising, finger-lickin’ good chicken, but surely, edible, chicken flavoured nail polish has got to be taking it too far? Apparently KFC doesn’t think so, and we say, good on ‘em!

The KFC nail polish comes in two variations: “Original” and “Hot & Spicy”, just like our regular KFC chicken in local chains. It is apparently also made entirely from natural food ingredients used in its fried chicken, and hardens when dry, with a glossy finish, mimicking the look of a nail polish.

However, that being said, this means that it is perishable, and you’re going to need to throw it out after just five days, according to KFC.

In other words, it is more food than it is nail polish.

At this point, you’re probably reading on out of a… well, perhaps a morbid sort of curiosity as to whether you can down the entire bottle of chicken-flavoured goodness – we mean, how it fares as an actual nail polish. Ahem.

For those of you salivating over this nail polish, you might be happy to know that it does at least taste like KFC’s blend of spices…but without the chicken flavour, according to this BBC review.

So, really, just spices and no chicken. Well, we figure that’s probably as good as it can get, anyway, to actual fried chicken flavoured nail polish.

Unfortunately for you fried chicken fiends out there, this KFC nail polish is only available in Hong Kong’s KFC chains, with limited stock available. Fingers crossed they’ll release this internationally? No? Not such a great idea? Well, your mileage may vary, we suppose.

DV says: Well, we’ll leave you to decide this yourself, but if you happen to be dropping by Hong Kong or have a friend in Hong Kong… why not, right? You only live once, are we right or are we right?