This Perfume Bottle Is Decadent. Take A Closer Look At It! 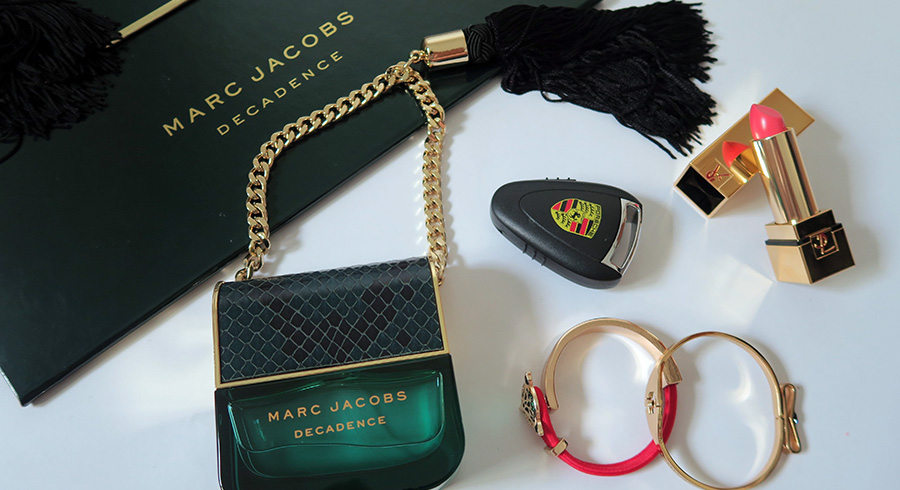 The most interesting thing about the latest fragrance by Marc Jacobs, Decadence, is that its smell reminds you exactly of its name: Decadence. It intrigues me; it’s like I’ve just met a woman called Joy who’s indeed very cheery, or a man called Hercules who is incredibly strong. You know, that kind of intrigue.

Decadence’s decadence begins with the eye-catching bottle. There’s no way you’re going to miss it; it is designed to look like one of Marc Jacob’s iconic handbags, complete with a metallic strap and tassel, and the look of leather on its body. In fact, I’ll boldly say that you’ll be sold on its appearance before you even smell it, because this is going to make an ostentatious piece on your vanity table.

Even the box has a velvety texture, which adds to its opulent vibe. The “cap” of the bottle that consists of the chain and tassel is a heavy weight that sits separately from the bottle within the box.

But the decadence doesn’t end there. Take a whiff of its scent. The luxurious fragrance opens with a heady, sultry top notes of succulent Italian plum, golden saffron, and velvety iris, and then develop into heart notes of rich Bulgarian rose, lush orris, and creamy nuances of jasmine sambac, before it dries down to sophisticated notes of liquid amber, vetiver, and papyrus woods.

Spritzing Decadence on myself, I felt as if I were wearing a flamboyant gown; this is a scent that a very feminine, assertive, and confident woman would wear. She knows what she wants and she gets what she wants.

“Decadent” as an adjective is probably also often used on food. There’s also something delicious about the scent that I can’t quite put my finger on. But I suspect when my colleague commented: “Did someone smell cake? Or something nice and sweet?” when I walked into the office, she could actually be smelling Decadence on me.