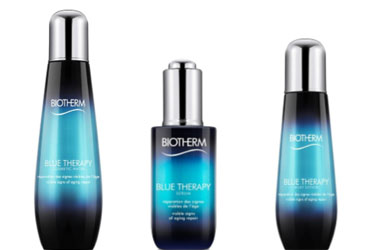 We have a bad news and a good one. Which would you like to hear first?

The bad news: Our skin is exposed daily to factors that cause it to age, including UV rays, pollution, stress and of course, chronological ageing.

The good news: The only factor that you can’t defy – that is, time – constitutes to just 20% of the appearance of signs of ageing. That means you can visually repair the other 80%!

The above findings came from a study by the Biotherm’s biologists, and armed with this new theory, they sourced three different aquatic ingredients from three different waters that have been found to have extraordinary properties to help fight signs of ageing. These are incorporated in Biotherm’s latest launch – Blue Therapy.

Aphanizomenon flos-aquae (AFA): Found in the Upper Klamath Lake in Oregon, USA, this is a auto-generating micro-algae that has thrived for 3.5 billion years and is found to carry nutrients such as minerals, vitamin B, beta-carotene, amino acid and proteins.

Laminaria ochroleuca: Found in the Celtic Sea, this is a firming agent that never loses its natural sturdy shape even though it’s being exposed to strong tides, waves, currents and winds.

Pure Thermal Plankton (PTP): Found in the Thermal Springs in France, this ingredient can be found in every Biotherm product. It carries 35 nutrients that are essential to reviving skin’s vital functions.

What does Biotherm Blue Therapy promise? 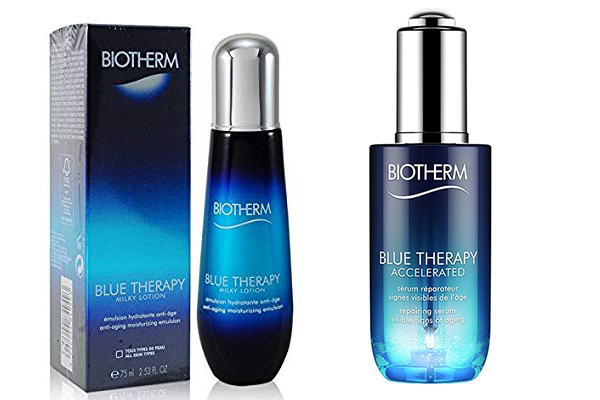 The range consists of the Cosmetic Water, Serum and Milky Lotion, with the serum as the star of the range. In line with the latest trend in the skincare industry, this caters to busy women as a super-serum that treats more than one skin concern. It helps with firming, brightening, and combatting wrinkles.

I have just started using it, so it’s probably a little too early to tell if it really is a great performer. However, at the launch event, I was treated to a facial treatment using mainly the Blue Therapy range (including products that will eventually be introduced to the line and haven’t been launched). The first impression was really good. As I lay on the bed in a villa at Capella Singapore, with my eyes closed, I could immediately tell that my therapist has applied something interesting on my face when she used the Blue Therapy serum on me.

The first thing that struck me was the citrus scent that’s very invigorating. I really enjoyed the fragrance and probably more so, the texture, which is super lightweight and hydrating. The absorption rate was fast and it leaves the skin feeling hydrated, plump and soft immediately.

After the facial treatment, even without makeup, my skin looks radiant, instead of tired, despite the many late nights I’ve put in for the last few days. Later on, because I had to go to work, I found that makeup goes on more easily, and appear to last longer too. This could be because the skin’s pH has become more balanced, and makeup neither cakes nor flakes.

Blue Therapy Cosmetic Water retails at SGD59, Blue Therapy Serum at SGD99, and Blue Therapy Milky Lotion at SGD85. The range will be available at Biotherm counters from 1 April, but Daily Vanity will be giving away 7-day trial kits to 50 lucky winners. Find out how to win by liking Daily Vanity on Facebook.