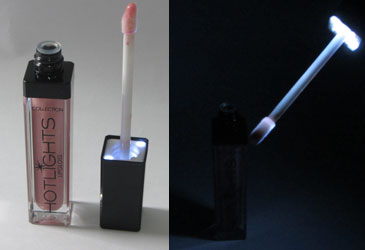 Collection is a drugstore makeup brand from the UK. The name might sound unfamiliar or even nondescript to some of you, but that’s only because it has recently arrived in Singapore, and available exclusively in Watsons.

We got our hands on the Hotlights lip gloss from Collection, a one-of-a-kind, at least in terms of the packaging. On first sight, it looks like a conventional lipgloss tube – nothing special. However, imagine my amazement when I opened it and was greeted by a flash of light! Having a light in a lipgloss is, literally, a brilliant idea. Pairing it with a mirror on one side of the tube, Hotlights is great for reapplying makeup even in dimly-lit places. It is perfectly handy in settings such as clubs or even at a candlelit dinner, when you are having way too much fun to visit the washroom just to reapply your makeup. This is definitely perfect for those who value convenience.

However, don’t hold your breath for the lipgloss itself. The colour I tried was Dazzle, which appeared to be a glittery hot pink in the tube. In actuality, the lipgloss is little more than a sheer pink. With the modest amount of glitter, the lipgloss wasn’t very outstanding on my lips when worn alone. Combined with its stickiness, the lack of colour makes me think that putting on a tinted lip balm would probably do a better job of highlighting my lips.

That being said, I’d suggest that the Collection lipgloss go over your favourite lipstick instead of on its own.