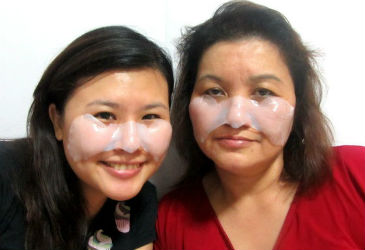 I am lucky enough not to be plagued with pigmentation problem, but I am actually rather paranoid about getting them in the future. Spots can actually be lurking within your skin, waiting to appear once you become complacent with your whitening regime.

Lancome has recently launched the Sun Loving Zone Mask, and improved its Melanolyser (also known as Spot Eraser). I have talked about the bio-cellulose here. It is an intensive treatment that takes care of the nose and cheek areas, identified by Lancome scientists as the area that’s most susceptible to sun damage. This is to be used approximately three times a week to see the best effect.

The Melanolyser, on the other hand, is inspired by laser treatment to visibly reduce dark spots. The new and improved version now promise to demonstrate a more long lasting effect, such that dark spots continue to be lightened even three weeks after you last applied the product. Take note that this is to be used all over the face (and not just on the spots).

For a bit of mother-daughter bonding’s sake, as well as to see the difference of the whitening duo on both our skin. My mother has some pigmentation around her cheeks and they have been rather persistent. As for me, I have been concerned with overall radiance and would really like to see more glow on my skin.

Note: My mother is in her early 50s, while I’m in my late 20s. We are both not wearing any makeup in the featured photos.

How to use Lancome Sun Loving Zone Mask

I’ll let photos do the talking.

Leave it on for about 10 minutes, and then massage in the serum in the method shown in the following diagram:

We both gave the masks a shot for a week, and we did it three times in all.

We love the the mask very much because it’s so easy to apply and it sticks firmly to our skin. All it takes was 10 minutes and it was really hydrating on the skin.

My mother found that it leaves a slight tingling feeling on her skin after using and she has to make sure that she applies enough sunscreen when she goes under the sun (sounds like laser treatment, huh!). After two masks, she notices that there’s lightening effect on her pigmentation. It has not entirely been eliminated but she’s definitely going to keep using it.

For me, I love the feeling of the serum on my skin after the mask. It hydrates and immediately brings glow to my skin. This will be a go-to mask for me if I want a quick perk-me-up for an important date. I could probably go without highlighter with the help of this.

The product doesn’t have much of an effect on me, probably because I don’t have any spots at all. However, my mother finds it easy to use and while the pigmentation hasn’t obviously reduced, she finds that her overall complexion looks more even, and the radiance from the skin helps to take attention away from the spots. The cheek area that’s closest to her nose appears to have cleared up the most (you could probably see from the pictures above). My guess is that since the treatment product is applied all over the face instead of just on the affected area, it probably is lightening out the spots without her really realising it. She’s a little camera-shy (and anyway, it’s just too difficult to get an exact same environment and lighting to do a fair before-and-after photo), but I find her more confident with her complexion since getting on the whitening regime.