A gentle moisturiser that 100% soothes sensitive, intolerant skin? We put it to the test 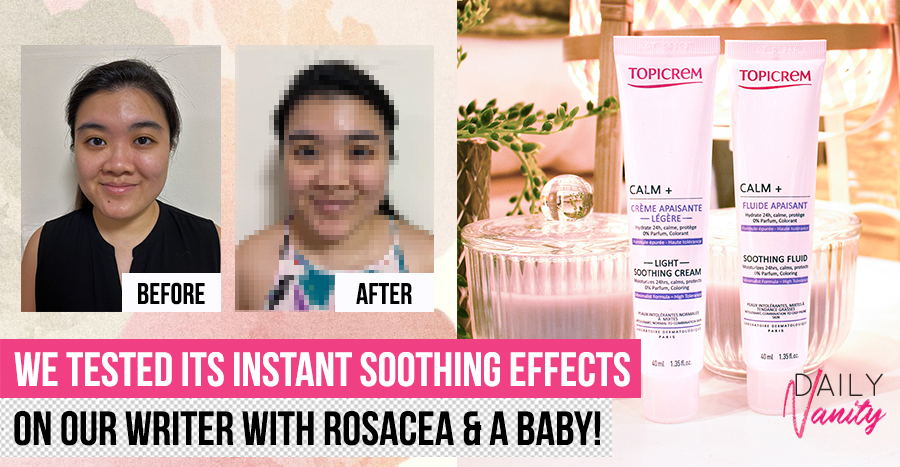 Throughout our lives, we have heard of people whose normal skin transformed over time into an oily or ultra-sensitive, acne-ridden canvas, and they have no idea why. We also know of those who use the same moisturiser from their early 20s, which should ideally be re-evaluated by the age of 30 as more hydration and ingredients that help in collagen synthesis may well be needed by the skin.

Yes, your skin type changes as you age Most of us are used to a certain amount of fluctuation in our skin needs; the weather, medications, and even the things we eat can affect how our skin looks and feels. With age in the equation (it just throws your internal systems and balance out of whack as time passes), it makes sense to switch up your skin care as this adjustment can be vital to getting the most youthful, radiant complexion.

Personally, I have a love-hate relationship with my combination skin – it’s oily in the T-zone while the U-zone is slightly dry. The combination of oiliness and dryness is something that I’ve been dealing with ever since I knew how to differentiate skin types.

Dark undereye circles have been a part of my face for as long as I could remember (no thanks to my night-owl lifestyle and also all the years of burning the midnight oil in university and at work) while my pores are more visible in the central part of my face.

That said, I feel that having such skin type allowed me to try countless beauty products – a job prerequisite, obviously – without having to worry too much. I’ve only ever broke out once because of using a wrong product – it was too rich and I also suspect that the marine ingredients might have something to do with it – but other than that, all my product testing rounds have been largely smooth-sailing.

Lately, however, I have been noticing signs of mild rosacea on my skin – it’s something that I’ve never noticed before and I could only deduce that it’s most likely to have developed recently (it’s said that people over the age of 30 are more likely to experience it). It also doesn’t help that it’s now mandatory to mask up in public, as it tends to suffocate my skin over an extended period of time which leads to other irritation such as maskne. 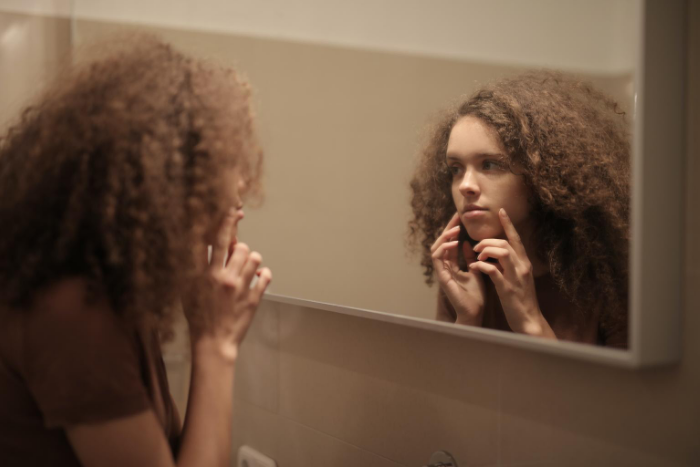 To put it simply, rosacea is a common skin condition that causes redness and visible blood vessels in the face, and can occasionally produce tiny, red bumps that are filled with pus in certain people. Some may even develop dry, irritated and swollen eyes or red, swollen eyelids – this is known as ocular rosacea. In men, rosacea can also thicken the skin on the nose slowly over time, causing it to appear bulbous and enlarged.

The flushed appearance and pimple-like bumps may flare up for weeks to months and then disappear on its own for a while, which causes it to sometimes be mistaken for acne or natural ruddiness. And here’s where the bummer comes in: rosacea can affect anyone but it’s most common in middle-aged women who have lighter skin tone that has particularly been damaged by the sun (yep, that sounds like me thanks to my love for sunbathing).

Apart from sun damage, the causes of rosacea remain largely unknown but skin experts opine that it could be due to a combination of intrinsic (hereditary) and extrinsic (environmental) factors. Among the factors that could trigger flare-ups include temperature fluctuation, hot drinks and spicy food, alcohol, exercise, emotions, certain medication that dilate blood vessels as well as cosmetic products.

To the best of my knowledge, there is no cure for rosacea but topical treatments can control and reduce the signs and symptoms from flaring which is why I volunteered to test the new Topicrem CALM+ moisturisers that my editor recommended to me.

(Psst… Read till the end of the article to find out how you can redeem samples to try!) 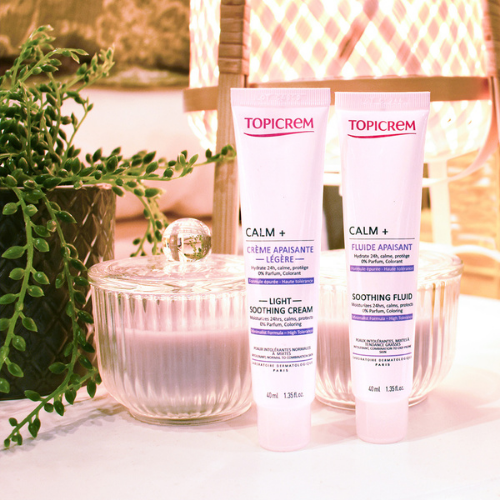 A pharmaceutical brand that started in 1993 after a request from a laboratory president to create a formula to alleviate his son’s atopic, dry skin, Topicrem is synonymous with gentle, soothing skincare formulations that are well-tolerated by sensitive skin in France.

To cater to intolerance in skin types other than sensitive skin, Topicrem developed two new formulas this year, namely the CALM+ Soothing Fluid for combination to oily skin and Light Soothing Cream for normal to combination skin.

The fragrance-free CALM+ series is made up of high purity unsaponifiable sunflower oil, plum oil, 5% glycerine, and 0.2% allantoin, and is created especially for these skin types that have grown to become intolerance or reactive to allergens such as fragrance and paraben.

The Topicrem CALM+ Soothing Fluid is a feather-light gel formula that helps instantly soothe skin while reducing skin reactivity and redness over time so that skin becomes more comfortable and less reactive over time. It also contains 1% silica in the formula for a skin-mattifying effect.

Just as lightweight as the gel, the Topicrem CALM+ Light Soothing Cream is also capable of comforting skin instantly and providing round-the-clock moisturisation but instead of silica, it is packed with 5% shea butter to offer skin additional nourishment.

For two weeks, I used the CALM+ Soothing Fluid during the day and the CALM+ Light Soothing Cream at night. As I’ve never really used products that target skin sensitivity before, I was pleasantly surprised at how well my skin tolerated the moisturisers and even seemed to be reaping the benefits that brand promises. 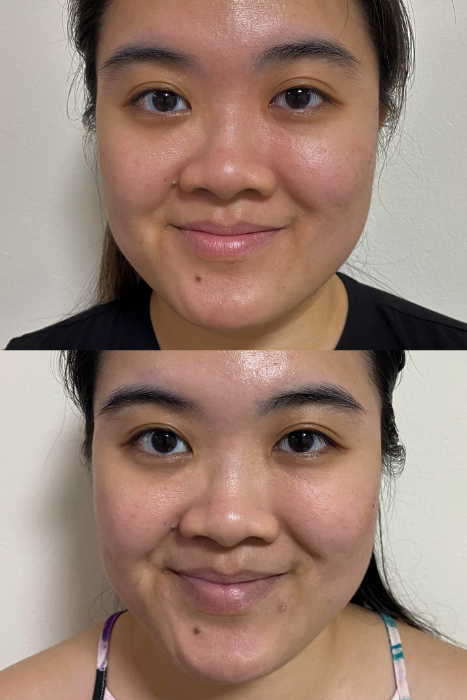 The CALM+ Soothing Fluid absorbed really quickly into my skin and doesn’t leave any tacky after-feel at all, so I didn’t have to wait too long for the moisturiser to be fully absorbed before applying my sunscreen. Thanks to silica in the formula, the oiliness on my T-zone was slightly controlled and my face didn’t feel as greasy as before. Usually when I work from home, I’d have to rinse my face and quickly repeat my skincare routine in order to freshen up but after using the CALM+ Soothing Fluid, I didn’t feel the need to.

On the other hand, the CALM+ Light Soothing Cream also absorbed really easily into the skin and still felt lightweight despite its slightly thicker texture. There was none of the unpleasant stickiness that usually comes with cream-based moisturisers, and it didn’t weigh down on my skin or cause any breakouts – after a minute or so, it felt as if I have almost nothing on my skin at all! When I wake up in the morning, my skin would still feel hydrated and nourished even though I sleep with air-conditioning all night long. These superior moisturising benefits that I experienced are also substantiated by clinical studies that tested the Topicrem CALM+ series on 22 volunteers. In fact, the studies showed that the moisturisers can soothe reactive skin by 100%, reduce redness by 80%, and increase skin tolerance by 59% after 28 days of usage! Both formulas have also been proven to deliver skin-calming effects by 21% instantly upon application.

The products come in a 40ml tube packaging that allows the product to be dispensed easily without any risk of spillage, and both formulas are lightly scented with sweet almond for a pleasant sensorial application. What’s more, Topicrem has also developed the gentle formulas without any artificial fragrance, paraben, silicone, alcohol, and colourant to ensure that it’s perfectly safe to use on kids and babies too.

Topicrem CALM+ moisturisers: Gentle enough for children to use too 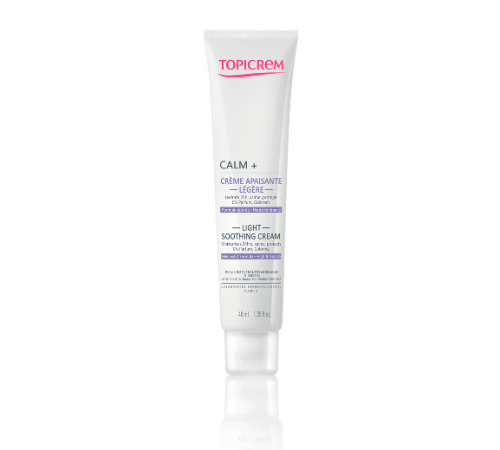 When we learned that the new Topicrem CALM+ series are safe for kids and babies, we decided to try it on our editor’s toddler just to determine if the products are really as gentle as they claim to be. The 22-month-old boy has sensitive and eczema-prone skin which requires regular moisturiser, and is often struggling with eczema flare-ups around his neck and behind his knees. Here’s what his mother has to say after trying the Topicrem CALM+ Light Soothing Cream for two weeks.

“Because my boy’s skin reacts easily to products, I am extremely careful with what I use on him. As such, I’ve only stuck to one or two brands that I know he doesn’t have an adverse reaction to, and they tend to be those that are formulated specifically for babies with eczema-prone skin. Before applying the Topicrem CALM+ Light Soothing Cream on him, I first did a patch test and when it all looked fine, I applied it on the affected areas which are his neck and behind his knees.

I was happy to observe that it helped to hydrate the area and it did not cause any redness or irritation on his delicate skin. In fact, I saw that he scratched a little less immediately after application.

Although it’s a cream formula, I like that the product is very fluid which makes it easy to slather on – I even tried it on myself out of curiosity! It is also lightweight and non-greasy, leaving no discomfort on his skin nor mine after application. The brand is absolutely spot on when they say that the product is suitable even for babies and children – after all the brand was first started by its founder to help his son with his itchy, dry, and red skin. This is a product I will continue to reach out for when it comes to any dry skin concern in my family.” Overall, both the Topicrem CALM+ Soothing Fluid and Light Soothing Cream exceeded our expectations and delivered all the promised benefits and more to both adults and children. Lightweight and non-greasy, both formulas are highly suitable for our humid Singapore weather as they leave little to no trace on the face after application – all you’ll get is calm, hydrated skin that doesn’t look red and feel itchy or tingly.

Not only that, the formulas are especially suitable to be used on the skin now as dermatologists and doctors are recommending the use of lightweight barrier creams to help protect skin against excessive friction and prevent skin irritation while wearing a mask.

Some skin experts even recommend applying a small amount of moisturiser where the edges of the mask sit to reduce irritation while your mask is on. With such gentle formulation, you can certainly count on Topicrem CALM+ series to protect your skin and keep friction to a minimum when you have to wear a mask.