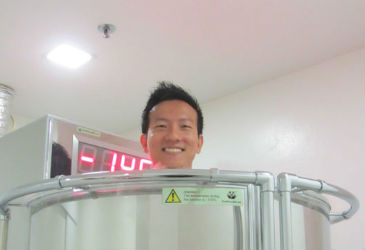 Ever heard of Cryotherapy?

Neither have we before this.

Cryotherapy (“cryo” means “cold” in Greek) is the use of vaporised liquid nitrogen to cool the skin surface to -1°C. This action stimulates the body into thinking that it is at risk of freezing and by placing the body in pseudo emergency state, it triggers the release of natural biochemical responses that is beneficial for health, beauty, fitness and overall well-being.

The benefits that cryotherapy reports include: This service is administered using a cryochamber, where vaporised nitrogen is released to atmospheric temperature to approximately below -150°C. From what we understand, this service is not available in Asia until now, at the local aesthetics company, Absolute Zero, an establishment by the ONLY Group. Each session only takes three minutes, and we were told that it is non-invasive, non-disruptive, pain-free and with no down time.

Keith and Kristen both gave the cryotherapy treatment a go and bring back our report:

I must admit I was really nervous about going into a chamber that is said to be able to freeze me at -150°C. The high-tech-looking chamber instantly reminded me of a torture chamber at the thought of it. What’s more, I was told that I have to enter the chamber almost naked, in order to get the best benefits from it.

Just like how I would prepare myself before say, a sky-diving experience. I told myself that no harm will come to me because I’m in the hands of professionals, and that I definitely want to go through it so I can “live and tell the tale” to Daily Vanity readers (I exaggerate a little, of course). Wearing fluffy boots and gloves, I entered the chamber with nothing more than my undergarments. The chamber’s door closed and the therapist elevated the platform I was standing on till the top of the chamber reaches my shoulders and my head is showing from it. The temperature then began lowering and I see vapour rising out of the chamber.

“Oh, it’s actually quite comfortable”, I told Keith (who, by the way, has volunteered me to go before him). It was just slightly chilly, but definitely wasn’t the “torture chamber” that I thought it out to be.

Gradually, the temperature lowered even more. All these while, I was slowing rotating myself on the platform so the vapour can get onto my entire body evenly. As the temperature went lower, I realise that my movement slowed down. My body trembled, my lips quivered and my teeth chattered involuntarily (I was told these are normal). I was still able to talk, though.

As it went on, I began to feel some prickly feeling especially on my legs. But very quickly, just as this slight discomfort sets in, the time was up and I could come out from the chamber. Wrapped in thick towels, I immediately feel warmth and relief. In fact, the sudden surge of warmth that comes naturally from my own body makes me perspire slightly even in an air-conditioned room and I could feel my heart pounding faster than usual.

I was told that metabolic rate will increase for the next six hours, so I thought it was a perfect day to go for a run. Jogging on a treadmill a few hours later, I noticed that my heartbeat increased faster than usual. Typically, I would only have hit 130 per minute in five minutes, but that day, my heartbeat increased to 150 in five minutes. I find myself perspiring a lot more than usual too. However, interestingly, I was able to sustain my energy for longer. Usually, I would have to exercise quite a bit of perseverance to complete a 3km run, but that day, it felt really easy.

Better stamina after weeks of training? Cryotherapy? Or placebo effect from the promise of the treatment? I’ve no idea. But my body says it could just be the cryotherapy.

In my defence, I gentlemanly said “Ladies first” knowing that top athletes and celebrities have survived the “cold treatment”.

Anyway, back to the treatment. I was very puzzled as to why top athletes like my beloved Cristiano Ronaldo who has a fabulous body need to go for such a beauty-related treatment. I asked the folks at ONLY and was told that Cryotherapy is not only used of beauty reasons. Top athletes use it as a replacement for the cold bath that frequently undergo to accelerate their muscle’s recovery rate.

We were required to strip down to our underwear before we enter the freezing machine. My immediate thought was: will my underwear get damp or wet because of condensation? We also had to wear winter gloves and footwear. For the record, you don’t have to worry about wet underwear.

First-timers will undergo 2 minutes of Cryotherapy. Once you have adapted to it, the subsequent sessions will be increased to 3 minutes. Anything more than 4 minutes may cause frost bite. Other than feeling cold and shivering throughout the 2-minute session, I experienced no prickly feeling like what Kristen felt. I thought 2 minutes was going to feel like an eternity before I stepped into the machine. But when I was in it, 2 minutes seem to go by really fast. I thought I could do another 2 minutes!

Tip to note: As Kristen and I went for the treatment around lunch time, we felt sleepy after the treatment and wanted to just have a nap. We were discussing between ourselves if it were the nitrogen that caused us to develop nitrogen narcosis or if the treatment made us feel too relaxed. No matter what it is, it will probably be better to go for an evening session after your gym session and shower. You’re not recommended to have a heavy meal before and after the treatment too.

PS: Nitrogen narcosis is common among divers although to degree of it depends on how deep they dived and the individuals. All gases that we breathe in have a narcotic effect.

I did not go to the gym to experience the effect of it. But I would definitely want to go back and try it again after a strenuous workout in the gym.

Treatments are priced at SGD188 onwards. Absolute Zero concept store is located at #03-15, Pacific Plaza. Visit www.absolutezero.com.sg for more information or call 6737-4434 to make an appointment.