Does Clown Contouring Really Work? Our Writer Tried It! Find Out How It Turned Out & How You Can Get It Right 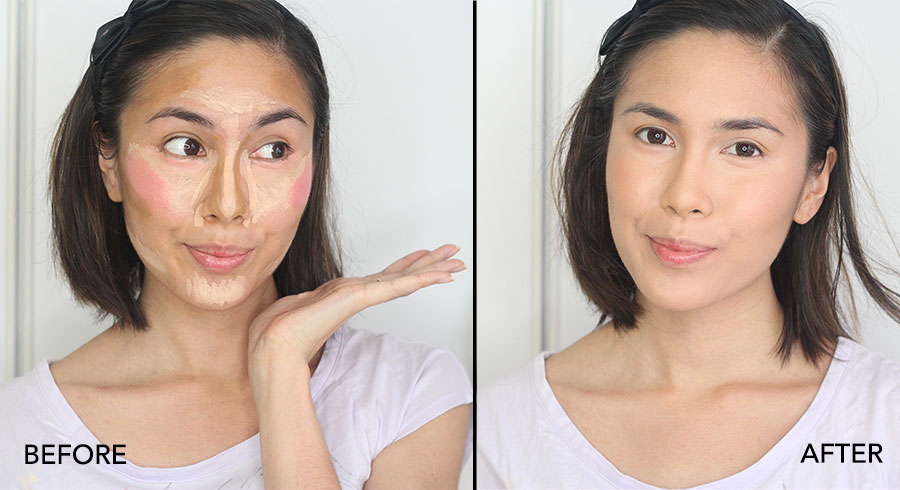 It’s called clown contouring because, well, you look like a clown before you end up looking fabulous. Could it be true? Or could these people just be drawing random stuff on their face, take a picture, wipe it off, and put on a fresh face of makeup, and take a picture and collage it side by side?

This writer has been tasked to test the technique out! Read on to find out the steps to clown contouring and if she thought it works at the end of the article.

Use a concealer that’s one to three shades lighter than your skin tone to highlight the highest points of your face, or the areas that you want to make more prominent. In this case, your forehead, the bridge of the nose, under the eyes, jaw, chin, and around the nose. For the under eye area, create an upside down triangle. It’s not featured in the image, but you can also highlight your cupid’s bow area.

Next, pick up a cream contour shade with your brush and start shading the hollows of your cheekbones, down the sides of your nose, and around your temples. These are the areas you’d want to create the illusion of shadows with the contour shade to make them look smaller. The product featured is a concealer palette from Zoeva. We used the darkest brown mixed with the darkest two shades from the last row of the palette in the photo. Taking any synthetic flat foundation or contour brush, sculpt out your cheekbones.

Using a salmon shade from the concealer palette, apply under your eye, concentrating at the area right below your pupils. You can also dab this towards the inner parts of your eyes as these are the areas where tend to be discolourations, like dark eye circles. Place it on your cheeks as a base for your blush colour.

Apply a generous amount of cream blusher onto your cheeks using a flat foundation brush. Cream blushers work better than powder because they’re easier to blend into the rest of the makeup. Don’t worry if it looks too harsh because we’ll be blending it out later! The product we used is the NYX Cream Blush in 05 Glow.

I didn’t go too crazy with the clown-like drawings on my face, but this is where I look kind of like a clown with the unblended, bright, pink cheeks!

Step 6: Blend with a sponge

Slowly bounce a damp sponge onto the skin to blend the harsh lines made by the products earlier. Aim to remove the obvious lines and create gradation, but don’t over-blend because you still want to keep the definition. We used the Beauty Blender, which is a great tool to deal with creamy and thick makeup products.

I over-blended it a little so I lost some of the definition. Forgive me, it was the first time I attempted clown-contouring!

Blend the lighter shades (e.g. highlight shades) before the darker ones (e.g. contour shades). This is to avoid blending brown all over your face. Not a good look, don't you think?

Step 7: Blend with brush and foundation

Finally, to smoothen everything out, get ready a long bristle stippling brush and your foundation of choice. Instead of buffing the foundation in with the brush, just keep stippling until the foundation has fully blended in together with the contour to create a flawless, yet contoured base for your makeup.

Set the makeup with some translucent powder to prevent it from budging. A setting spray would also do a fabulous job!

For a first-timer at clown contouring, I have to admit that… IT DOES! It gave my skin a flawless and defined finish. The cream blush gave  a healthy glow, as though I was really blushing! It took me about half an hour to get the product on, and blend it all out. I was pretty impressed by the outcome.

This technique would look AMAZING on camera – photographs or in videos. In all the years I’ve been doing makeup tutorials on YouTube, I’ve never made up my face to make it look as flawless as it did in the pictures for this article.

I wouldn’t do this every day as a lot of creamy products are involved and it looks very thick on me in person. To achieve a flawless clown contouring outcome, one must know how to blend out cream products very well. I didn’t blend out some areas properly which caused those parts to look slightly patchy and out of place. This means that you probably need to be very experienced with makeup to achieve a good result. Other than that, I think this is a pretty fun and cool technique to achieve flawless skin for occasions when you really need this much makeup, like as cameo in a movie, or if you just want to look great in your own video or photos.