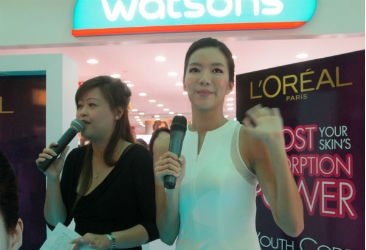 Mention Rui En and the first thing that comes to mind is probably her tough ice-princess image. However, the 2013 Star Awards Best Actress has certainly shown her femininity as the face of L’Oreal Paris’ latest product – the Youth Code Boosting Essence. This is a essence that’s formulated to allow your skin absorb skincare products better.

Hailed as the Queen of Ratings, Rui En’s roles usually require minimal makeup. So how does she remain constantly camera-ready?
The 32-year-old shared during L’Oreal Paris Event held on 1st June at Watsons Ngee Ann City that she puts on a facial mask daily. And when she’s out filming, sunblock is a must for her.

Rui En said that she’s honoured to endorse L’Oreal Paris. When she was a little girl, she would see L’Oreal’s commercial with beautiful celebrities reciting the tagline, “Because you’re worth it”. It was like a dream come true for her to recite the tagline, which L’Oreal has been using for ages.

Rui En also demonstrated how the L’Oreal Paris Youth Code Boosting Essence helps skin to absorb skincare products better by applying the product only on one hand followed by a test of absorption on both hands. The hand that has the Boosting Essence applied showed better absorption.

The actress is currently filming local drama, Sudden, in which she plays a lawyer and her latest drama, The Dream Makers will debut on 24 June 2013, 9pm on Channel 8.