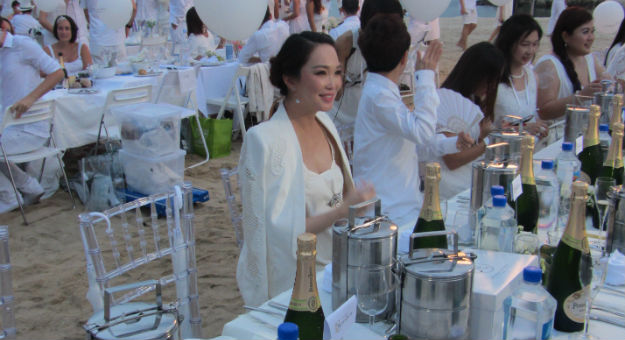 First-time mother, Fann Wong, will be due in August and her actor husband, Christopher Lee has already asked her for “permission” to post photos of their firstborn.

He said he wanted to share the photos to “show off”.

Fann laughed as she recounted this to Daily Vanity, and said “I told him, of course! It’s your baby!” But while Fann Wong has been posting her own selfies on Instagram, she said she still doesn’t know if she will be posting lots of baby photos on the social media platform yet. “I don’t know if people are going to wonder why my feed is all about baby only,” she laughed and said.

So fans, maybe you should follow Christopher Lee closely if you want exclusive photos of their newborn.

Christopher Lee has been very “supportive and protective”, according to Fann, but he is also a “police” who bans her from certain foods.

“I had craving for puffer fish, instant noodles, sashimi, white wine, champagne,” Fann said, “but he says no, no, no, you can’t have sashimi, and no coffee, no alcohol, no cold stuff.”

But Fann hasn’t had a lot of cravings since her pregnancy, lucky for Christopher.

“A lot of guys asked him if I have any midnight cravings. But I’ve been very good. I’m usually already sleeping at 11pm.”

The only peculiar craving she had was during her first trimester, when she wanted freshly-squeezed orange juice from a particular bakery every day, which Christopher has to get for her.

The actress, who gave Daily Vanity this interview at the Diner en Blanc, as Marie France Bodyline’s new ambassador, also told us that Christopher Lee has been a doting husband. “My legs are getting swollen day by day and he’s helping me to massage them everyday now,” she shared.

“And until the end of the second trimester, he has been sleeping at the edge of the bed, taking up just one quarter of it. He said he was afraid that he might kick me!”

The couple still doesn’t know the baby’s gender, but it was reported by The New Paper some time ago that she was intending to name the baby after the player who scores the winning goal for World Cup 2014.

When asked by Daily Vanity about this, she said that she was only joking and that she will not leave her baby’s name up to something like this.

“Christopher and I will decide on the baby’s Chinese name first. We will be consulting someone to ‘calculate’ a good name for the baby,” she said.

Chinese geomancers traditionally look at the baby’s birth details to decide a name so that the baby will have a good life.

Fann Wong said that they will decide on an English name after that.

Want more of Fann Wong? Read Part 1 of our interview with her, where Fann Wong shares her beauty secrets and her plans after delivery.

Here are also more photos of her, while at the interview with Daily Vanity and a video of her addressing you: