Why Men Need Sunscreen Too 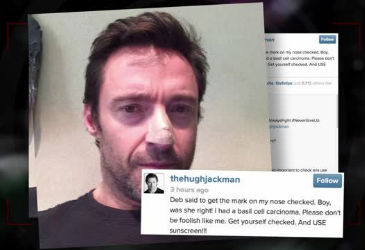 You may think that a basic skincare regime of cleanse, tone and moisturise is too feminine for you to go through (we beg to differ, but that’s a story for another day). But if we really want to be insistent on one item that we want everyone – men and women – to have on their desk and pouch, it’ll be the sunscreen. And you don’t need to have gone for the best secondary science tuition to know this.

Because even Wolverine, with his regenerative powers can’t fight the effects of UV exposure!

Well, not exactly Wolverine, but we’re talking about Australian actor, Hugh Jackman, the star of Wolverine, who reveals that he has been treated for skin cancer. This happens after he noticed a mark on his nose and went to seek medical advice for it.

Posting an Instagram image of his face, with a bandage over his nose, Hugh Jackman said that he had been diagnosed with basal cell carcinoma (BCC), a common form of skin cancer that usually develops on skin that has been exposed to the sun. The main treatment of BCC is surgery. If left untreated BCC can damage or disfigure surrounding tissue, although it doesn’t usually spread to other parts of the body.

“Please don’t be foolish like me,” he wrote. “Get yourself checked. And USE sunscreen!!!” If for some reason, you daredevils decide that cancer is too rare to happen to you (not true, by the way!) check out the case of truck driver Bill McElligott. The 69-year-old’s photo has been making its rounds on the world wide web. This is what happened: ultraviolet A (UVA) rays transmitted through the window of his delivery truck severely damaged the skin on the left side of his face. He has been driving on the job for 28 years.

If you look at this photo, it’s not hard to notice that the left side of McElligott’s face looks roughly 20 years older than the right, the Toronto Star reports. Even medical experts were shocked by the difference between the two sides of his face just because of extended exposure to UV rays.

Related: What you may not have known about sunscreen

Now, if the manly Wolverine says yes to sunscreen, every man should find it masculine enough to slather it on faithfully every day – for the sake of your looks and health.