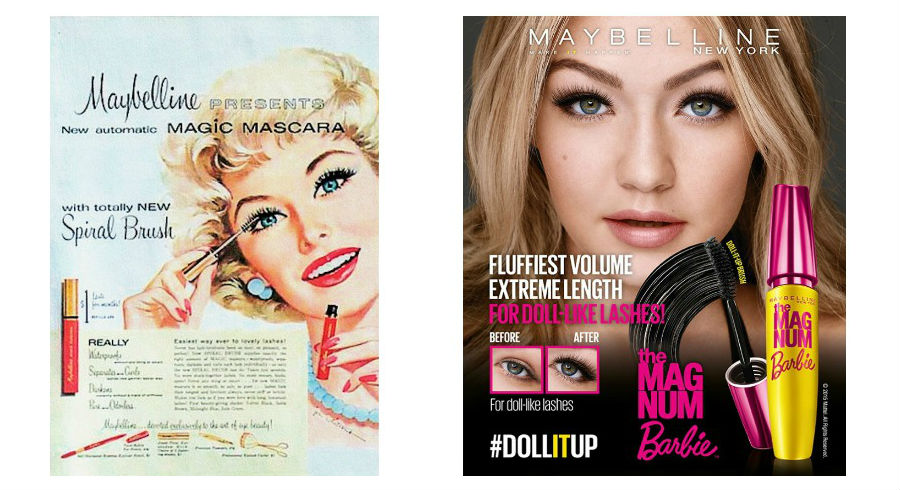 The way beauty brands communicate to us have obviously evolved over the years. We certainly have come a long way. Check out how five of our favourite brands have changed the look of their advertisements through the times. We also tell you if grandma would be able to understand the advertisements we have now.

Both advertisements are for a key product from the Re-Nutriv range. The look and feel of the advertisement has obviously changed in 85 years, but what’s interesting is that key elements remain: minimalist design featuring just an ambassador and the star product, a headline that points towards luxury, and a few paragraphs of text that explains why it’s worth its price tag.

Would grandma understand? She is definitely going to identify with the positioning of Estee Lauder Re-Nutriv as a luxury range and a beautiful ambassador is still going to appeal to her.

The Chanel No. 5 perfume is probably one of the most iconic products in the French luxury brand and it has seen many famous ambassadors, including Marilyn Monroe and Nicole Kidman. More recently (in 2012), a male ambassador (Brad Pitt) was appointed for the first time. These two ads show a shift in the way Chanel No. 5 is presented: from telling you it’s what every woman alive wants, to pairing it with arguably the sexiest man alive.

Would grandma understand? Grandma will wonder if Chanel No. 5 is now marketed as a masculine scent. (It’s not.)

Maybelline, whose first product ever is a mascara, may have launched many mascaras through the years, but the ads don’t always look different. Check out the mascara advertisements by Maybelline through the times and you’ll notice it always zoom into the face of a woman, showing off her dramatically lush lashes. This visual presentation has stuck for almost 100 years.

Would grandma understand? She’s probably going to approve of the ad but wonder what a hashtag is and what it’s doing in it.

Some things never change. The layout of the advertisements honestly looked exactly the same although they are 56 years apart. Both feature a key visual of the ambassador with her hair swept to her right (your left) showing off her nails accompanied by a headline that talks about the benefits of their nail enamel (length and strength respectively). A sub-headline and a paragraph of text goes into the white space at the bottom, followed by the product image on the left. Even the very last line of the copy (“In 33 fabulous shades, and “In 24 brilliant shades”) sound exactly the same. Perhaps, like what people say: why fix it if it ain’t broken?

Would grandma understand? She’s going to feel right at home with the 2013 ad featuring Emma Stone.

We don’t know what you think but this makes us feel extremely old. 1997 doesn’t feel that long ago – some of us are already wearing makeup then – but it’s been almost two decades ago and the style of the ads looked so different. And take a look at the advertisement for Teint Idole at that time – would you imagine a Lancome ad looking like this now? The one on the right of Teint Idole Ultra 24H is the updated version that we are more familiar with now.

Would grandma understand? Probably yes, and also be glad that we’ve progressed to have a black woman as a beauty ambassador (yay!)