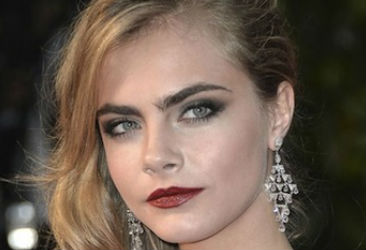 So we’ve shared with you our favourite hairstyles spotted at Cannes Film Festival 2013. Now, of course, we gotta talk about makeup too.

Not so conventional smoky

Just like boring updos, we are getting a little tired of black smoky eyes at red carpet events. So when Rooney Mara turned up in a sleek hairdo complete with purplish-grey smoky eyes, we give a thumbs up. While black gives a sultry look, it can also make the wearer’s eyes appear smaller, and if done wrong, messy. So, go with grey instead! Just remember to fill in your brows so they can frame the heavy eye makeup.

A typical rule that we often hear about makeup is this – pick just one feature to highlight. Cara Delavinge, the latest It girl broke all rules when she showed up in her signature bold brows, smoky eyes, dark red lips and nails – not to mention voluminous, wavy hair, and bold jewellery. Instead of overwhelming her, it actually makes her look very glamorous. If you’d like to pull off a similar look, just remember to keep to similar colours in your makeup. Notice that Cara’s nail and lip colour are very similar, just as her eye makeup and brow colours are close to each other, and they complement her dress. This ensures there’s no clutter.

We can never emphasize enough about how bright coloured lips can make you stand out effortlessly. Fan Bingbing rocked a bright orange lipstick, which worked well with her coral blusher that warmed up her skin. She went easy with eyeshadow and instead choose to focus on creating a flawless-looking canvas that make her skin glow. The only peeve we have of this look is the falsies. We think she’d have looked better if she opted for a more natural-looking set.

Nicole Kidman have had quite a number of hits and misses at red carpets recently, but her recent appearance at the Cannes Film Festival 2013 seem to tell the world that she’s still got it in her! We love this fresh-faced makeup that sees a bit of highlight at the inner corners of her eyes – which was certainly a touch of magic. The lip colour is bold, but not overwhelming, thanks to the pink shade that would make anyone look radiant. The seemingly understated look certainly has a lot of thought put into it.

Finally, you don’t need to pile on a lot of colours to look doll up. Just take a leaf out of Emma Watson’s lookbook! Tying her hair up in a knotted bun, Emma looks like a glamorous ballerina with barely-there makeup so everyone could just focus on her gorgeous, defined features. Compared to other actresses her age, we think Emma does it right by remembering the mantra of “less is more”.

By the way, if you enjoyed this article, you may also like our coverage of the Oscars 2013 and Star Awards 2013.