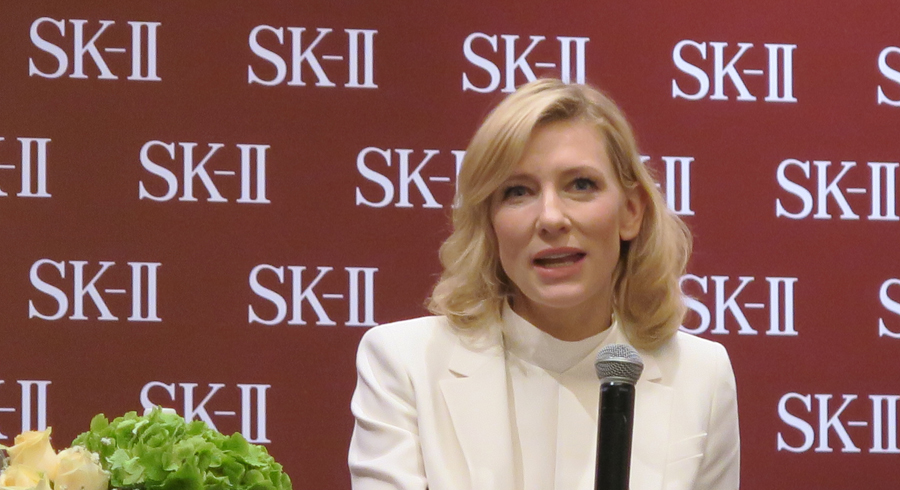 Cate Blanchett may be an award-winning actress known for many well-known film roles, including Queen Elizabeth I in Elizabeth, and Katharine Hepburn in The Aviator, but she did not grow up being praised for having good skin.

Speaking to the media while she was in Singapore to promote her upcoming movie Carol, and for Singapore Fashion Week, Cate Blanchett admitted that nobody has ever said she had good skin when she was in her teens, up to her early-30s.

All these have changed, since she started adhering faithfully to a good skincare regime, the 46-year-old said. The Oscar award-winner has been an SK-II ambassador for the last 10 years, and said that her skincare regime has changed her skin’s “destiny”.

Cate shared that after her first pregnancy, she noticed changes to her skin and that made her want to take a step to making skincare a priority. Being a pragmatist, she started trying SK-II products after being introduced to them, but only gave the products – the SK-II whitening range and Facial Treatment Essence – a one-month period to prove their worth.

The trial turned out well when her husband, playwright and screenwriter Andrew Upton, noticed the difference in her skin. “You know that it must be good when your husband notices the difference,” she said and laughed.

Now, the mother-of-four uses SK-II products mainly from its LXP range, including the Facial Treatment Essence, serum, moisturiser and sunscreen.

But she had this skincare advice to give: “Skin is not static. Like your personality, it evolves. And so you should change your products according to your skin’s condition.”

She said that therefore, she changes the SK-II products that she uses from time to time, although the Facial Treatment Essence is a mainstay. In fact, she loves the “miracle water” so much that she used to decant it into a small dispenser when she travels so that she can use it to hydrate herself when she travels.

Thankfully, SK-II has just launched the Mid-Day Miracle Essence (as well as the Mid-Night Miracle Essence), which is basically the Facial Treatment Essence repackaged and reformulated for convenient on-the-go skincare. With the launch of these two new products, Cate no longer needs to decant her must-have product.

Her other favourite product? The Facial Treatment Masks, which she said helped to perk up her skin instantly and that she brings them along on set to refresh herself up in between scenes.