The new age of cushion foundations is all about that case – a beautiful one, that is

When we think of cushion foundations, one brand that probably comes to mind is Laneige. Since they launched their first cushion, the Snow BB Soothing Cushion, back in 2012 in Singapore, the K-beauty powerhouse has continued to come up with new cushy offerings to address various skin concerns.

They took the humble cushion compact and turned it a cult product known for its luminous finish and travel-friendly packaging. While we used to look at formula and convenience, savvy beauty enthusiasts aren’t just looking at these two factors in a cushion compact anymore. Now, we also keep an eye out for sleek cushion compacts that look extra chic on our vanity and when we whip them out for a midday touch-up.

That’s right. We’re welcoming a new age of cushions, and they’re all about that case.

It started with the Dior Forever Couture Perfect Cushion Foundation Spotting an improved formula in August last year was Dior’s Forever Couture Perfect Cushion Foundation (S$92). Housed in a quilted black leather case, the cushion had the brand’s iconic Cannage motif and a silver monogram CD logo on the cover.

In it lies a foundation that gives your skin a matte, luminous finish – one that hits the sweet spot between a blurred, filtered effect and a radiant one. The cushion also promises 24 hour-long hydration, thanks to its moisturising wild pansy extract. It’s no surprise that when it launched last year, the cushion practically sold out everywhere. 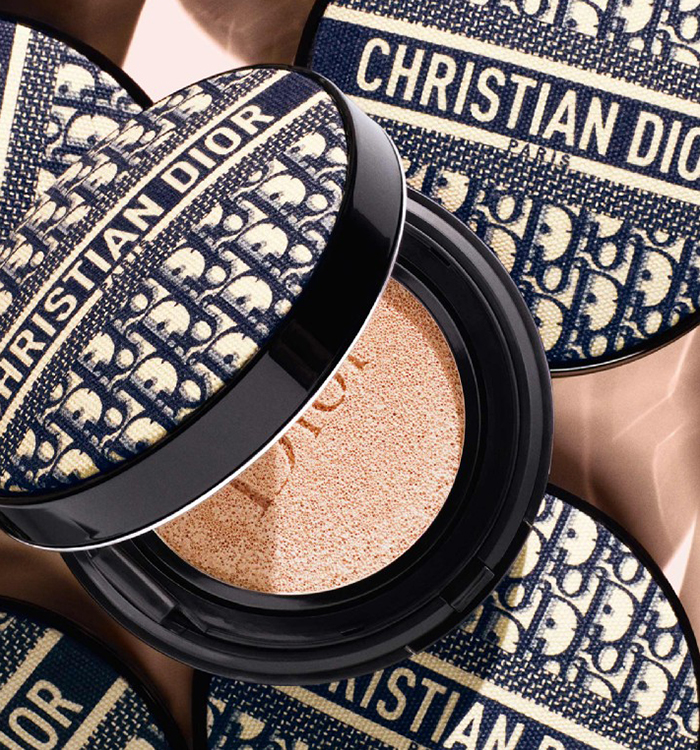 Earlier this January, the cushion received a limited-edition makeover that had both beauty and fashion followers bouncing off the walls. The Diormania Edition (S$98) of the Couture Perfect Cushion Foundation came dressed in a print that the brand’s fashion offerings are no stranger to.

Yup, it was the emblematic Dior oblique print in navy – the same one that adorns Dior’s ever-popular Book Totes and Saddle Bags. There were only 1,000 pieces available in Singapore, so you can only imagine how quick each cushion was snapped up. 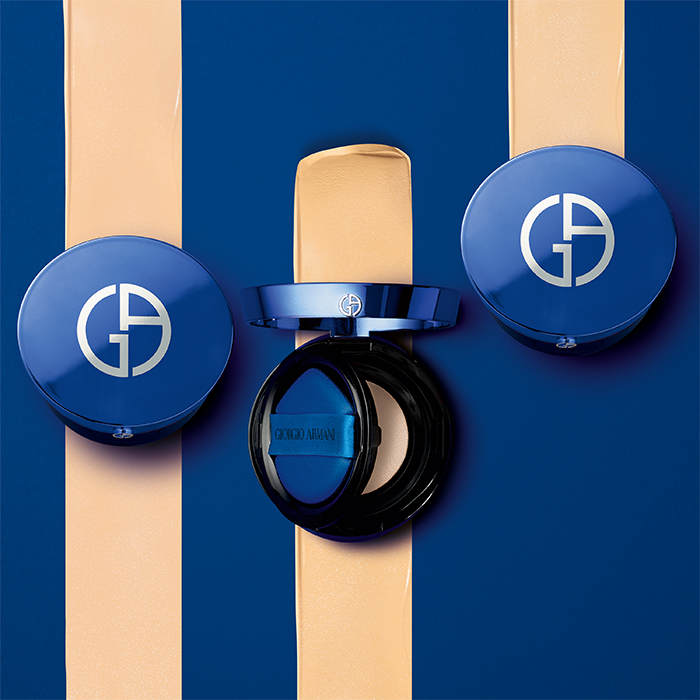 Decked in Armani Beauty Designer range’s signature blue, the Essence-In-Balm Mesh Cushion (S$120) made its debut earlier this May. It takes on a metallic, silvery sheen that looks ultra chic, no matter where you place it. The cushion’s case is also adorned with a silver Giorgio Armani monogram for a touch of luxe.

Case aside, this cushion compact comes with a made-to-measure applicator that has both pointed and rounded sides to fit the contours of your face perfectly. Its wide strap also makes the applicator easier and much more comfortable to use as you buff the foundation over your skin.

The foundation boasts a soft, creamy texture that melts into the skin, as it shields your complexion with SPF 50. Mirroring its packaging, the formula contains electric blue pigments, pearls, and powders that deliver instant radiance. On top of that, the cushion’s fine mesh layer allows for easy, buildable coverage. First launched in 2016, YSL Beauty’s Le Cushion Encre De Peau (S$102) received an update this August. Inspired by black leather, a signature trait of Saint Laurent, the cushion now comes in a luxurious, chevron-patterned compact case to match your classic YSL bags and accessories. It also bears the iconic gold YSL Cassandre logo on top, which makes it more desirable than ever.

Formulated with natural ingredients, such as antioxidant-rich jasmine petals from Saint Laurent’s own Ourika Gardens, this foundation gives your skin a matte, second-skin finish without drying it out or making it look cakey. 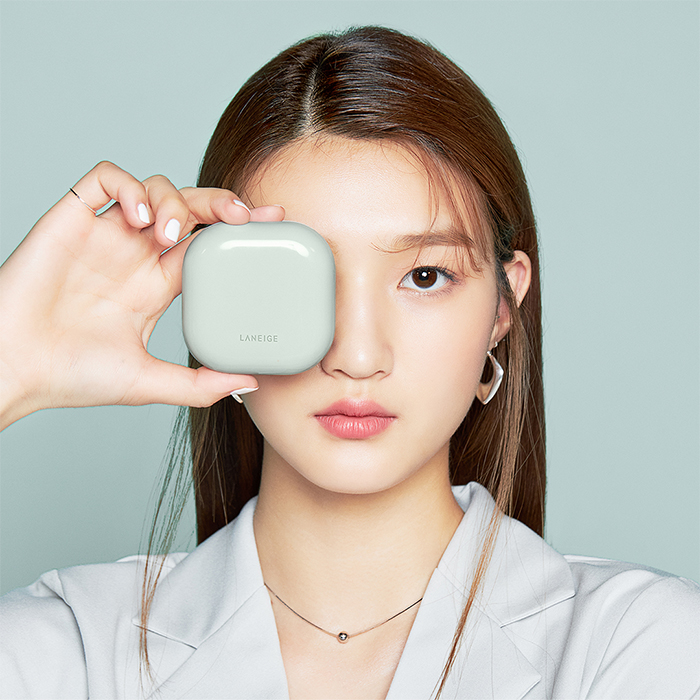 In September, Laneige introduced its new Neo Cushion Matte and Neo Cushion Glow (S$62 each) – the latest cushion compacts on our list. Its sleek monolithic case resembles an AirPods case, making it the most fun yet aesthetic cushion we’ve seen this year.

In case (no pun intended) you didn’t know, the idea to create a square-like cushion came about when the brand collaborated with Yeongkyu Yoo, a Korean designer who used to be the creative director at Samsung, Nike, and Microsoft HQ. It puts a fresh spin on a round cushion, and its borderless design makes it comfortable to hold as well. 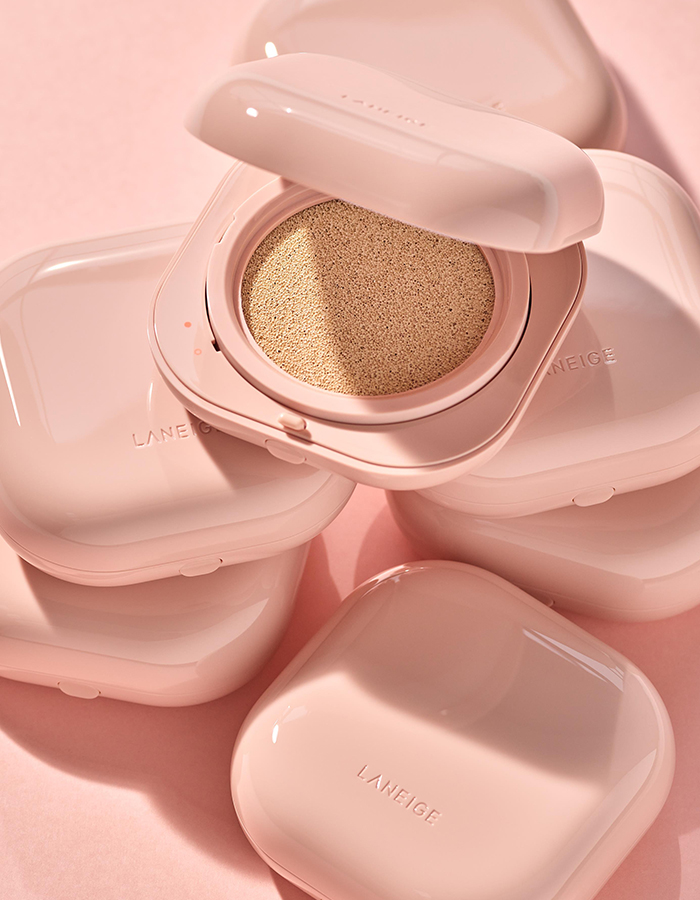 Besides being easy on the eyes, it’s user-friendly too. Like other cushion compacts in its range, the cushion refill can be easily removed. With this case, however, you can choose to open the cover from either the left or right side.

Formula-wise, the Neo Cushion Glow is made with liquefied diamond powder and nanosilver glitter to keep your complexion glowy and radiant. Meanwhile, the Neo Cushion Matte contains a blend of powders to blur pores, imperfections, and uneven skin tone for a natural-looking, matte finish.

Feast your eyes on the Dior Forever Cushion Powder If you have a penchant for pretty products like we do, then Dior’s Forever Cushion Powder (S$92) might just be your next object of desire. Just like the Dior Forever Couture Perfect Cushion Foundation, the Cushion Powder is dressed in a quilted leather case, with the brand’s Cannage mofit and a silver CD logo on its cover.

However, this case comes in a soft, muted beige that looks every bit as elegant as Dior’s Couture Perfect Cushion. Plus, what sets this formula apart is its fresh, powdery texture. It’s infused with water and bear hints of shimmering pearl to give your complexion a sheer, subtly iridescent glow.

The Forever Cushion Powder is part of Dior’s The Holiday 2020 Golden Nights collection, which will be available at all Dior counters from 1 November 2020. Go ahead and mark your calendars.