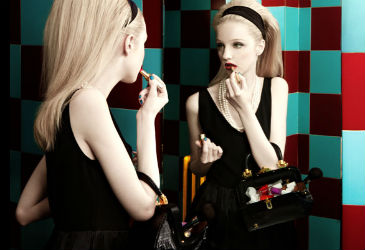 It pays to be beautiful – sometimes literally. The obsession over our weight, breasts’ size and looks take on a different level of crazy as seen in some of these slightly controversial initiatives.

1. Judging a book by its cover

Ever been told to never judge someone by his or her appearance? Apparently, some people don’t believe in that. Tinder is an app that lets you know someone who happens to be in the vicinity; you can choose to anonymously like the photo of him or her or skip to the next suggested person. If the person likes back your photo, Tinder will let you chat with the person within the app. Tinder has reportedly produced more than 50 engagements and 75 million matches between its users.

Brayola is an app that claims to be “an online personal discovery service.” Women can use the app to snap photos of themselves in their intimates and upload for everyone to rate, in order to find “the perfect bra.” Having a deeper cleavage definitely helps to up those ratings – and your own self-esteem. The entire app community sounds like a mega-sorority right? What is probably creepy is that, men can also download and use the app.

T.I.T. is a club in Dublin that came up with a wild promotion for ladies. Free entry was offered to women who snapped photos of their cleavage and uploaded it to the club’s Facebook page. That’s not all, you will have to get a rating of more than 8/10 in order to enjoy the promotion. Ladies’ night is not the only way to go if you want to let loose for free.

There have been sporadic news reports of breast implants saving women’s lives. Guinness World record-holder for having the largest breasts, Sheyla Hershey, has a 38KKK chest and reportedly said that when she got into a car accident, the airbags in the car didn’t go off. Her breasts took most of the hit and she believes that they helped to save her life. Female victims of shooting and stabbing incidents have also came forward with tales about how their silicones saved their lives.

The fastest (but never the healthiest) way to lose weight is of course, to stop eating completely. If you think you don’t have enough discipline and self-restraint, how about getting a plastic tongue patch that makes eating so painful you will have to stick to a liquid-only diet? This unique form of plastic surgery was developed by a Beverly Hills plastic surgeon and has yet to be approved by FDA. We definitely do not foresee any Hollywood celebrities sporting this in the near future though.

The United Arab Emirates is one of the richest countries in the world and unfortunately, also comes in fifth in terms of obesity rates. What can the government do if they have money, but no power over the people’s diets? If you live in Dubai and happen to be overweight, you stand to get one gram of gold for every kilogram you lose if you take up the 30-day challenge that municipal officials have offered.

7. Exercise to pay off your rent

In Japan, an all-female residential facility charges its occupants rent by the amount of weight they lose or gain. The building has quarterly weighing sessions and for every kilogram a woman loses between sessions, she pays SGD$12.60 less in terms of rental payment. The reverse is also true when she gains weight. The facility was started with the goal of encouraging overweight women to exercise but has since attracted fit women who want to stay in shape.

This isn’t your typical flight ticket promotion. Samoa Air is an airline company which have implemented a “pay-by-weight” system, charging airfares by the total weight of the passenger and her accompanying luggage. The CEO of Samoa Air reasons that this system will contribute to addressing the high rates of obesity in the region. Not to mention, you will have the incentive to exercise and lose weight just before flying off for a very well-deserved vacation.

All these being said, such controversial news should never affect any woman’s perceptions about herself. A woman’s body is her own and she has the right to demand respect from other people when it all boils down to how she feels about others’ treatment of her.

If you don’t feel completely comfortable in your own skin, don’t worry, you’re not alone! As long as you make the right choices for yourself, there is nothing that should set you back and prevent you from being proud of who you are and how you look!