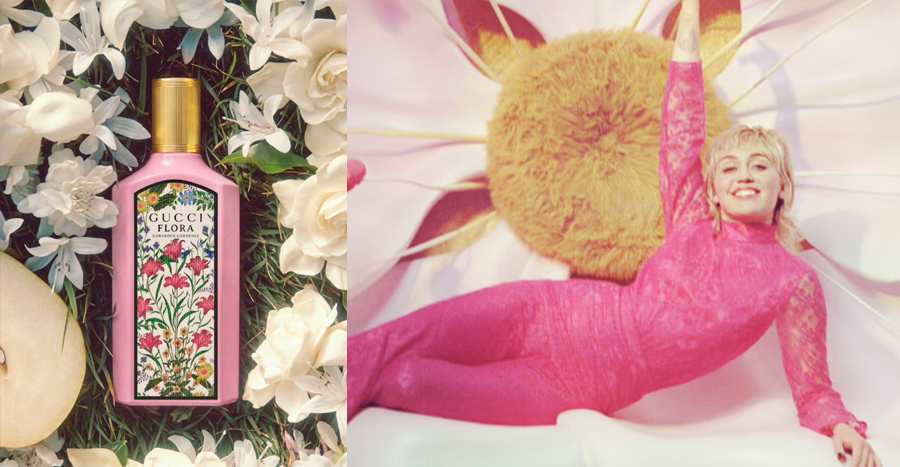 For its 100th anniversary, Gucci has chosen singer and actress Miley Cyrus as the face of their new Gorgeous Gardenia Eau de Parfum.

She rocks her song Delicious in the whimsical ad campaign where she’s depicted as an anime character in a dreamy, vibrant garden filled with cats, dogs, and bright colourful flowers.

That’s right – so if you’ve ever wanted to see Miley Cyrus as an anime character, now you can as she is pictured strumming on her guitar on a beach as the sun sets behind her.

Her shaggy mullet and bright purple top combination make her look electrifying in the campaign, and we’re all for it. But that’s not the only thing that captured our attention.

The combination of Gucci and anime is almost strange but so beautiful; it matches Miley’s personality wonderfully.

The perfume also seems to match the rock-and-roll artist perfectly, with its golden cap, bright pink bottle, and floral design.

Floral scent lovers will likely adore this new scent, which contains notes of pear flowers, Egyptian jasmine, gardenia, and has base notes of brown sugar and patchouli.

Miley said this of the campaign, “The Floral Fantasy is being who you are. None of us are made with just one ingredient. We all have different notes, some subtle and some bold.”

We’re digging this new Gucci campaign and think Miley is perfect for it – what about you?