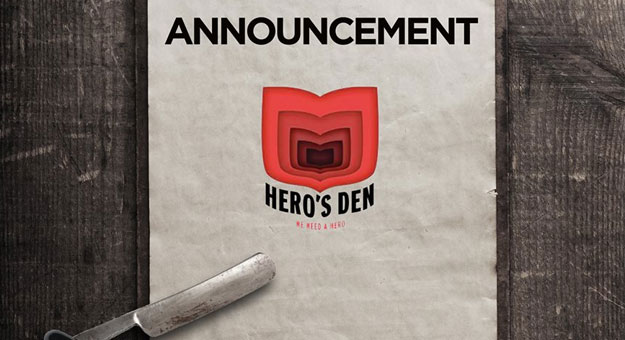 Ever wondered why superheroes like superman manage to keep their hairstyle constantly sleek throughout time? It’s because of We Need A Hero.

Located at a not-so-secretive location at 57 Eng Hoon Street, the heroes’ big boss decided to open a salon to help the heroes with their grooming needs in April 2013. As time flies, the heroes realised their spandex outfit and weapons (what Humans call “accessories”) are outdated and no longer sufficient to deal with future threats from the super villains.

Fearing they will be upstaged by super villains, they submitted their request to the higher powers to help them. 16 months on, the powers from above acceded to the heroes’ request and launched the Hero’s Den. Behind the grooming area lies a secret chamber that holds the heroes’ armoury. The heroes are spoilt for choices with armlets from Carrie K and innocent-looking watches from ÃARK Collective.

Need a stash to store your potions? The armoury contains bags from Brooks England and made-in-Singapore cases from Fabrix. We know galactic battles often involve sun ray blasts, so we want to protect our heroes’ eyes with sunglasses from Persol, ksubi, and Waiting for the Sun. Superheroes are supposed to fight along with the police, instead of being arrested by the (fashion) police. That’s why the powers from above decided to bring in dapper wears from Sundays, Kaminski XY hats, Happy Socks, Soludos espadrilles, and LLYR shoes, to ensure our heroes stay on the right side of the law. Time to upgrade your suits if you are still wearing that spandex from 1960s.

Related: Interview with Sultans of Shave co-founder on why classy gentlemen salon are getting popular.