Update on 3 March: Local prices are finally out, keep reading to find out how much the products in this collection cost in Singapore!

Two iconic brands – one in fashion, one in beauty – just joined hands, and we are over the moon! 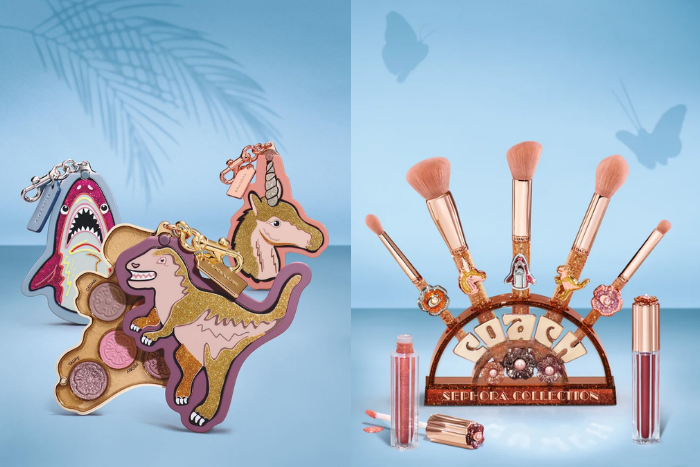 Over the weekend, we caught glimpses of the Coach x Sephora Collection collaboration on the internet and after confirming with our local sources, we just knew we have to break the news to you.

Designed by the American fashion house, we can immediately see how the quirky limited-edition collection would totally vibe with the millennials and Gen Z with its bohemian, whimsical groove.

We broke the news to you on Monday and an official press release that just arrived today has confirmed that the limited-edition capsule collection comprises a total of seven makeup products featuring Coach’s signature logo, the tea rose wildflower, and a selection of characters that the brand has used on its apparel and accessories in the past. 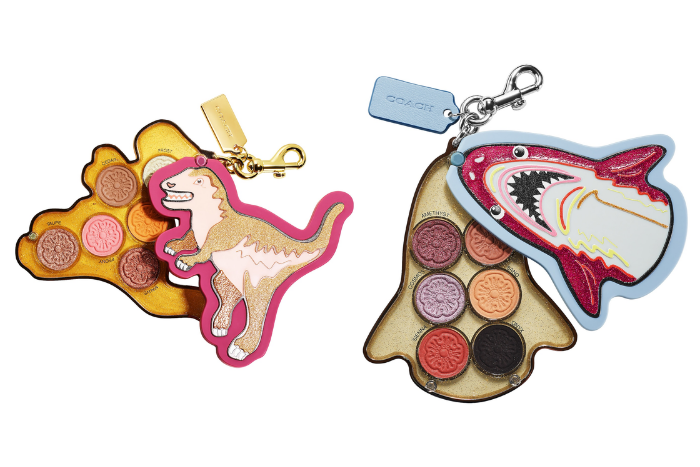 If you’re a Coach fan, you’d probably recognise these unofficial Coach mascots, which include Rexy the dinosaur, Sharky the shark, and Uni the unicorn.

According to multiple reports, Coach’s interim chief executive officer, Todd Kahn, referred to the partnership as one of the fashion house’s ongoing efforts to further connect with the younger demographics who apparently made up nearly half of the 2.5 million new customers that the brand has gained in the last seven months.

Kahn went on to add that the collection was “truly a collaborative effort” with Sephora as all the products in the series were designed and created using input from Coach’s creative director Stuart Vevers, who wanted to create something playful while being rooted in a rich colour palette that recalls the brand’s leather heritage.

Here’s a full breakdown of the collection, which is rolled out in conjunction with Coach’s 80th anniversary this year: there are two six-pan eyeshadow palettes, which are the Rexy Eyeshadow Palette and the Sharky Eyeshadow Palette (S$80 each). 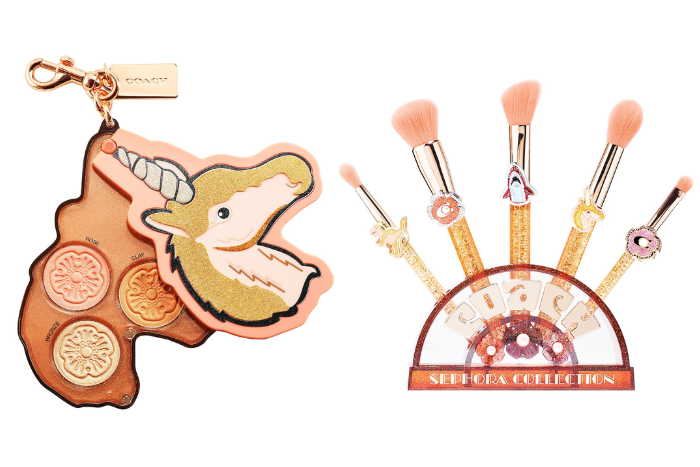 You can also find a Uni Face Palette (S$80), which houses a blush, a highlighter, and a bronzer. All the palettes in the collection feature matte, metallic, and shimmery shades that Sephora worked closely with Coach to finalise the colour palette and finishes.

In case you didn’t notice, all three palettes are also fitted with a key ring-slash-hook so they can double as a cool bag charm.

Additionally, the range includes a Tea Rose Brush Set (S$120), a five-piece collection of brushes with glitter handle and vegan-friendly synthetic bristles featuring the brand’s animal friends and the ladylike tea rose image that are housed in a glittery stand.

On top of that, there’s also a Tea Rose Lip Set (S$72) with four gloss shades and a Tea Rose Nail Set (S$45), which features a dreamy pink nail polish and stickers featuring Coach’s signature motifs. There’ll be something for the skin as well, in the form of a Tea Rose Eye Mask Set (S$24) with three pairs of cucumber-rose infused under-eye patches.

For those who have always wanted a dinosaur-inspired eyeshadow, you definitely won’t want to miss the limited-edition Coach x Sephora Collection which has hit stores – both online and offline – yesterday (2 March).

Meanwhile, you can check out the swatches of the palettes and lip glosses in the Instagram post below.