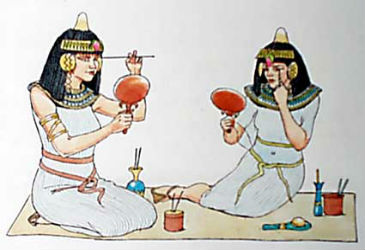 Through recorded history, humankind has sought out ways to change our appearance. Whether it was to camouflage our bodies for safety, embellish ourselves as a sign of celebration, or just “pretty up” to attract a mate, or “ugly up” to scare someone on the battlefield, we have turned to elements found in the natural world in order to augment the way we appear to others.

Have you ever wondered why we use a lipstick or an eyeliner? These products originated from thousands of years ago. Follow us as we show you how they used to be before Maybelline or Lancome took over the production.

The evolution of lipstick

Used to denote social status, lipstick is thought to have first come into use over 7,000 years ago in the land that was then known as Sumer. Throughout the Egyptian empires, it was typically lead-based and not worn, as one might think, to attract a mate as much as it was used to show how wealthy someone was or how high up in society that person’s class was.

Once the Greeks got a hold of lipstick, however, things got a lot more complicated. At first, prostitutes were really the ones who could get away with painting their lips up and as most cultural anthropologists would say – here is where the genital imagery came into play (we’re not going to delve too much into this, but use your imagination!)

The brighter and the plumper, the costlier, and interestingly, there were Greek laws mandating that prostitutes always have lipstick on just to make sure everyone knew what their occupation was. Later on, those from the highest class began adopting the use of lipstick to flaunt social norms and its popularity spread throughout Greek society in various forms, the most interesting being crocodile feces. That’s right, poop, and they applied it directly onto their lips. Eww!

The Egyptians also founded the eyeliner

As anyone fond of the exotic and powerful Egyptian, Cleopatra, might know, the use of eyeliner came into popularity in the Middle East in the ancient Mesopotamia, where it had a very practical use; protection from the blistering sun and the prevention of wrinkles. Even 12,000 years ago, vanity was the mother of invention and the upper classes donned their makeup with flair.

Stylistic differences in shades, heaviness, darkness, and the footprint of the eyeliner on the face of the wearer began to develop. Gradually, the use of eyeliner took on religious significance until the fall of the Egyptian empire to the Romans. It wasn’t until the discovery of King Tut’s tomb in the early 20th century that the Western world embraced the use of eyeliner. It flourished in America with a renaissance in culture crested in the 1960s and 1970s.

The start of nail polish use in China

Five thousand years ago, nail polish came into heavy use during the Zhou dynasty in China. As with lipstick, colour played a heavy role in the determination of one’s social status. But it was quite a consuming task to maintain this fashion and people would typically soak their fingers for many hours in order to get the colour on. As makeup historically goes, the minerals and materials used were typically very unhealthy and this method of application wasn’t too good for your life expectancy.

The French salons of the 19th century created a future cottage industry once the Americans got ahold of the concept and really developed the market for manicures in the 20th century. By that time, advances in adhesive and color technology made the process more efficient, simple, and fun.

The history of blusher

Blush, or rouge as it has historically been called, came about in ancient Egypt as a way for those of a higher class to exhibit health in the form of flush, red cheeks to counter the heavy cat-like eyes embellished with heavy eyeliner. But it was in ancient Greece that the practice of whitening the face before applying rouge came into being. Unfortunately, those wealthy enough to afford this clownish look experienced high levels of lead poisoning from the whitening process.

As Christianity took over, this practice died out until the Dark Ages, when some even more odd practices brought rouge back into heavy use. It was during this time, that people would actually bleed themselves to enact that coveted pale look that would then be countered with a heavy application of blush. Oddly, something done to exhibit the look of greater health in the cheeks has historically been used in conjunction with efforts that decreased overall health. Irony!

Later, when Queen Elizabeth took the fashion to its greatest height, various forms of personal harm occurred to people through the use of blush. Those frightened of blood, would eat arsenic in order to make themselves pale. Some preferred the lead-based paint to create a white mask topped with a mercury-based rouge. Obviously, this was disastrous. Aren’t you glad the cosmetics we used these days are a lot safer?

When did people start using foundation?

The use of foundation throughout history is an interesting representation of wealth and health. When ancient Greeks smeared their bodies with lead-based white paint, they were doing it to look rich, a concept that continued throughout the Middle Ages when people thought light colour meant less work outdoors and therefore, lighter skin. Interestingly, during the bubonic plague people were frightened (to death) of falling ill, so they spent most of their lives cowering indoors. Perhaps cowering is too heavy a phrase, but they really avoided public spaces to the point where they appeared ghostly. Foundation was employed to affect changes in skin colour. Women were hoping to appear less gauntly, so they began painting their bodies to look as though they lived carefree lives outdoors.

As foundation developed alongside the industrial revolution, variations in colour became ever so more slightly delineated and the use of foundation as a subtle concealer of skin flaws grew until it’s now the go-to start for everyone’s makeup ritual.