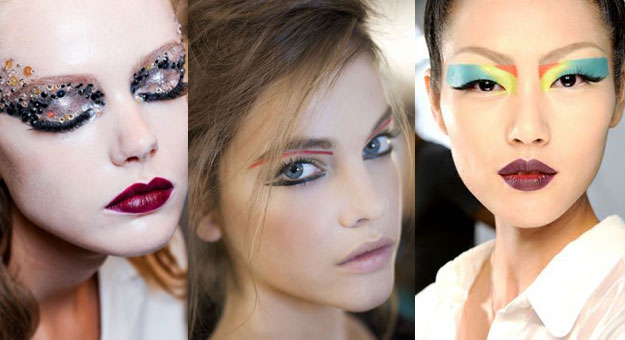 Makeup is all about experimenting and that’s what makeup artists do to create a certain type of look. While some are those we can easily incorporate in our own makeup routines, not all looks we see on the runway that are as wearable as we hope. But that doesn’t mean we can’t ogle at them! Here are 13 not-so-wearable eye makeup that we’re currently loving. This is a step up from the usual cat eyeliner. Not many would appreciate this look, unless you’re a fashion designer, makeup artist or makeup enthusiast. This trend involves blue eyeshadow all around the eyes, including the lower lash line. It looks like it will transport you to the Little Mermaid world, but we think to others, we might just look like this- Although white eyeliner on the waterline helps one look more awake, for us Asian girls, white can look too harsh against our skin tone and hence, using a nude eyeliner would look better. It’s so sparkly! No doubt, it’s quite a statement to make- walking around sporting a chunky glitter liner. But in Singapore’s weather, you may just end up with glitter all over your face at the end of the day. Perhaps do this at a costume party? Argh, this looks AMAZING in the picture. But if we were to attempt it on a regular day, people may think we just got punched. It’s a bit much for a normal day, don’t you think? But oh-so-gorgeous. This look is really cool! It’s like a cat eyeliner, but you leave gaps in between them. Again, not many will appreciate the brilliance of this makeup look on a regular person. Don’t think we would have the time to paste each rhinestone one by one on our eyes every morning, on top of waking up…

10. Eyeliner Near the Browbone From this picture, you can see how white eyeliner can make your eyes look so much bigger. How cool is that! But of course, you wouldn’t want to freak people out with your doll-like eyes. And not to mention, the sets of lashes you’d have to put on. The key to putting on eyeshadow is to blend, blend, blend. In this case, there is no blending, and instead of the eyeshadow being placed in a semi-circle shape on the lid, it’s being shaped like a box instead. It’s a very bold look with bold and bright colours. But not exactly wearable. It does look like you’re a superhero wearing a mask, though. This is such a soft and pretty eye look- with thick, fluttery, PINK false eyelashes. Some of us already feel afraid to use coloured mascara – what more, pink false lashes. Well, thankfully, in this picture you’ll find out how you can recreate it to something more wearable.

Which one of these not so wearable eye makeup looks will you recreate to make it wearable?