This hair care centre is a hidden gem with a 4.9 star rating – and it only uses natural ingredients! 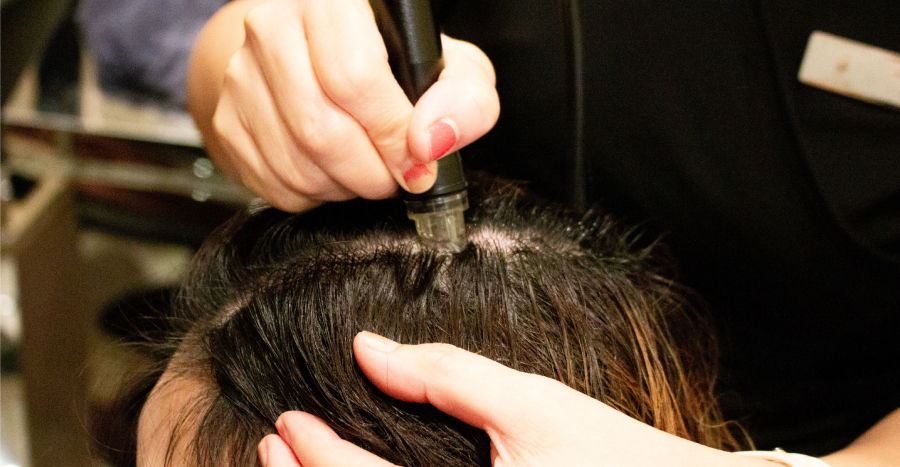 Hair loss is something that a lot of people tend to struggle with, and more often than not, many tend not to seek help through hair care centres out of embarrassment as well as a fear of chemical treatments. As such, they turn to hair loss shampoos and tonics in hopes that they would alleviate their symptoms.

Our editorial director Kristen had always had quite a lot of hair – so much that her hairstylist used to joke that he needed to charge her extra because he had to use more products.

However, she started noticing hair fall recently. Unlike others who experience it due to lifestyle factors or genetics, hers was caused by her second pregnancy.

Her hair would fall out in chunks whenever she combed through or washed her hair. She could also see that her hair was getting significantly “flatter” after many of these hair fall episodes.

“Naturally, my self-esteem took a hit,” she shared.

Despite trying many hair volumising shampoos, nothing seemed to work, so she started her own research and she found that the answer was simply going for scalp treatments at a hair care centre.

Contrary to popular belief, not all hair care centres use chemicals in their treatments for hair growth.

In fact, one very good example of a hair care centre that uses natural ingredients is Bio Organicare.

“Seeing its 4.9-star rating on Google made me realise that this could be the one to solve my postpartum hair loss concerns!”

Bio Organicare: the hidden gem with a 4.9-star rating

Bio Organicare is a hidden gem that uses America’s newest detoxifying treatment to clear your oily scalp and reduce hair loss. The technology from America can also prevent environmental and oxidative damage that can cause your scalp to become inflamed and aged.

The formula has been perfected over the years it spent on research and development such that customers can see visible results in the shortest time possible. In fact, you can see results after just one treatment!

Some of the ingredients it uses include rice bran wax, rosemary, soy lecithin, microgranules, and thyme to deep-cleanse your oily scalp and facilitate blood circulation to promote hair growth. This is not only healthier, but also cleaner for your scalp.

“It may not be one of those ‘big-name salons’ but it actually has over 10 years of experience in offering customised treatments for each individual depending on their hair loss concerns,” she shared.

Upon arrival, Kristen was pleased to see how luxurious and professional the place looked. “I took a seat on one of the comfortable couches available and started filling out a questionnaire so that the team could understand my concerns better. The questions included asking about my hair condition, lifestyle habits, and how often my hair was falling out.”

She was then ushered into a cosy private room for a personal consultation with a hair consultant.

She explained that a scalp analysis would first be done so that she could identify the reasons why Kristen was experiencing hair loss.

The consultant revealed a handheld device and gently placed it on Kristen’s scalp. Immediately, a magnified imagery of her scalp could be seen on the computer screen in front of her. She took a couple of photos and proceeded to sit down to explain what the photos meant. 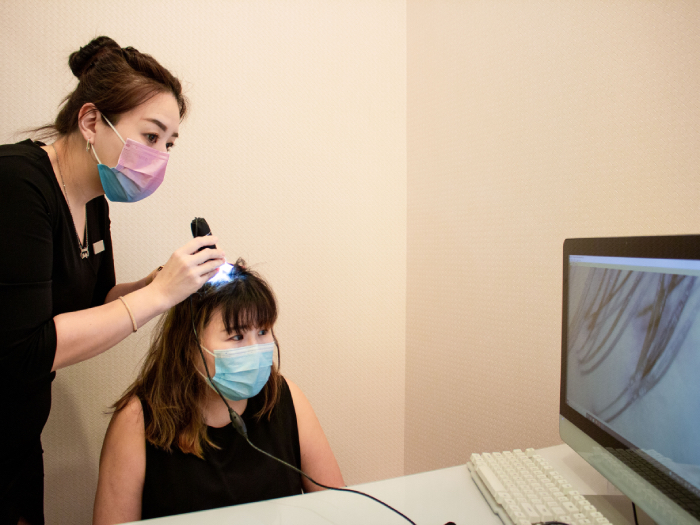 “Looking at the photos, I could tell that there was a thick layer of sebum on my scalp, and this indicated that my scalp was oily, and many of my follicles were clogged with sebum and dead skin,” Kristen shared. 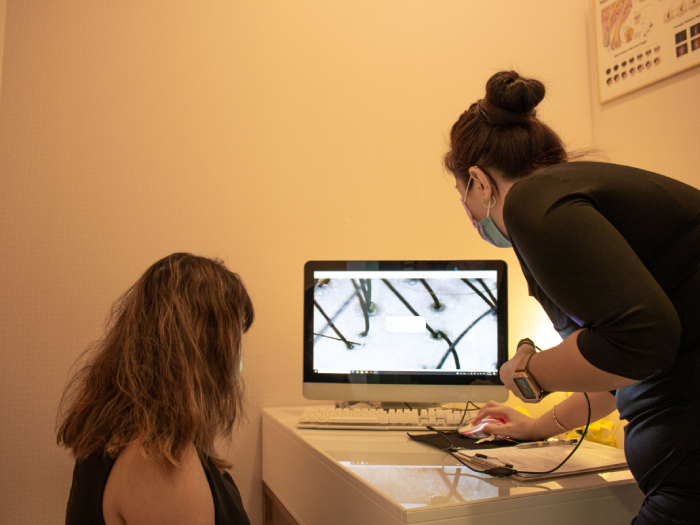 During the analysis, Kristen’s consultant told her that she had to get her foundation right first before she could start seeing any hair growth.

“As my hair follicles were clogged, they were unable to receive any nutrients or oxygen from the hair tonic that I was putting on my hair.” 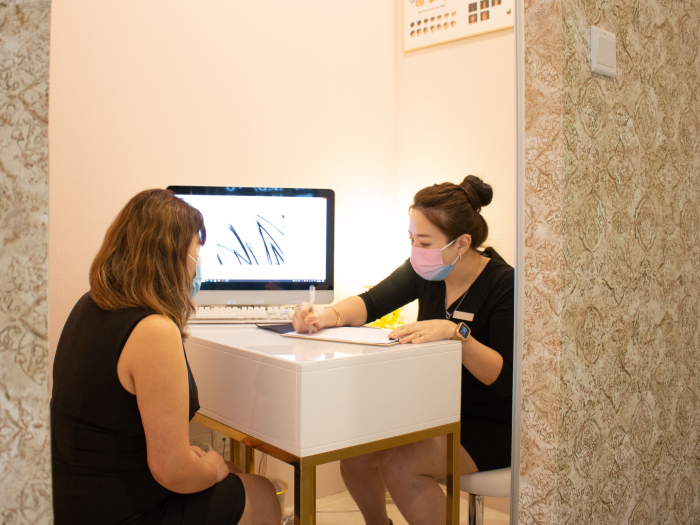 At the same time, while she noted that it’s good that many of the follicles were producing more than two strands of hair, she also noted that some follicles appeared to have stopped producing hair and may eventually “close”, leaving a bald spot if there are too many of them clustered together.

“I was quite worried upon hearing this, but was later relieved to hear that my condition can be improved with scalp treatments!” Kristen shared.

Kristen’s consultant proceeded to propose a customised treatment for her and went through the steps that they would be taking, keeping her informed so that she wouldn’t get confused during the treatment process later.

Before they started the treatment, her consultant also gave Kristen a couple of tips that she could use at home so that she can see an improvement, such as avoiding late nights and changing her hair parting every once in a while.

After the analysis, Kristen was ushered to the salon area so that she could start with the exfoliation of dead skin cells on her scalp. It was here that Kristen was introduced to her hair therapist who would be helping her with her treatment. She first applied a scalp masque on Kristen’s scalp before using a handheld device to help stimulate blood flow and remove dead skin cells. “This felt particularly pampering because the device gave a very comfortable massage to my scalp, which helped me feel more relaxed,” Kristen shared about her favourite part of the treatment. 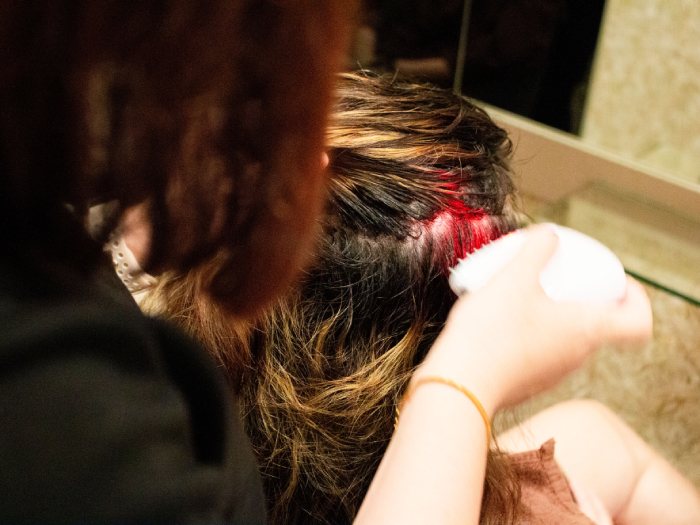 In order to remove the deeper layer of the oil clogs, her therapist used the Aqua Filtration System, the latest advanced technology in scalp care to suction out the oils. 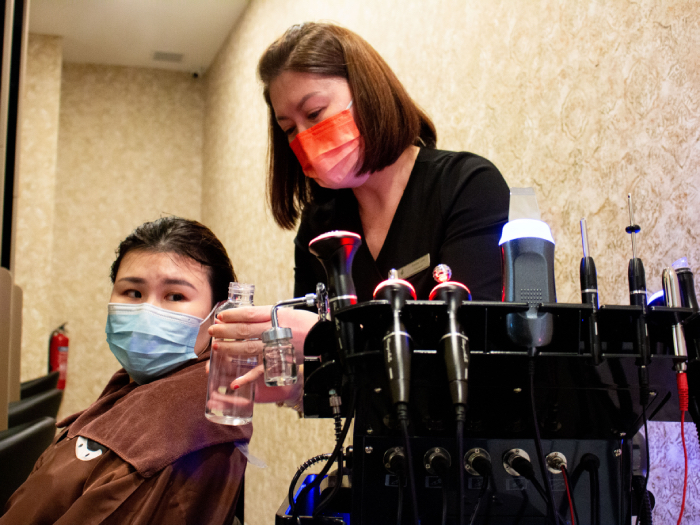 At the same time, the machine pumped in oxygen to neutralise the condition on her scalp and follicles. At the end of this step, she showed Kristen that the water that was once clear within the machine had now turned cloudy. 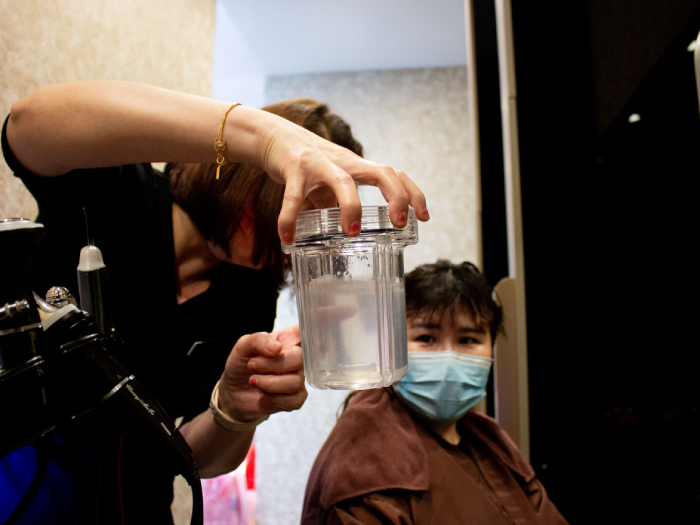 “This indicated that a significant amount of oil was suctioned out of my scalp, leaving behind only unclogged follicles that were ready for the next step.”

Kristen was then given a scalp and hair bath using lukewarm water.

“Based on my scalp condition, she expertly chose a suitable shampoo and started giving me one of the best scrubs I’ve had in a while,” she commented.

“She also massaged my scalp which made me feel even more pampered!” 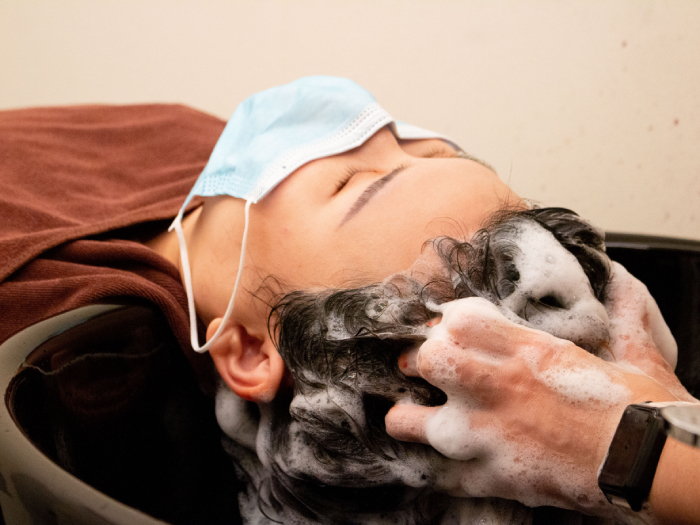 Heading back to the salon area, Kristen’s therapist gave her an ioniser hair blow and immediately applied an essence tonic – Bio Organicare Hair Elixir – to her scalp for better absorption of nutrients. She even massaged her scalp once again just to boost the absorption. “She blow-dried my hair fully and even styled it nicely for me. And that was the end of my treatment process!” 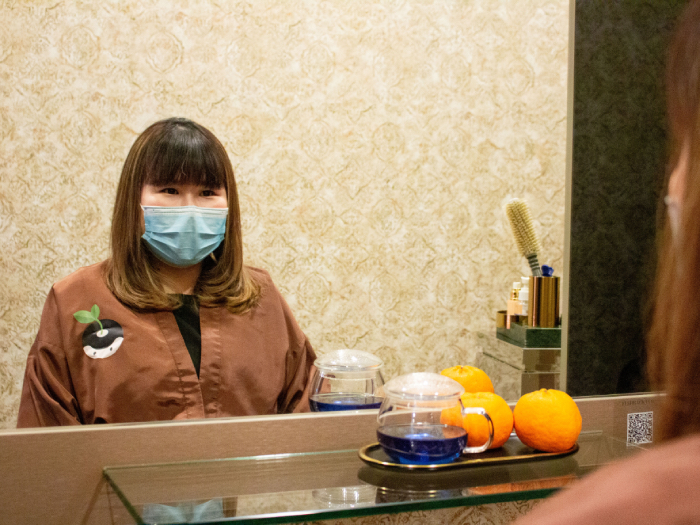 In order to find out if the treatment had any visible results, Kristen returned back to the consultation room that she was first ushered into for a post-treatment scalp analysis.

She met with her hair consultant once again and she placed the handheld device on Kristen’s scalp to reveal a magnified imagery of her scalp on the computer screen. 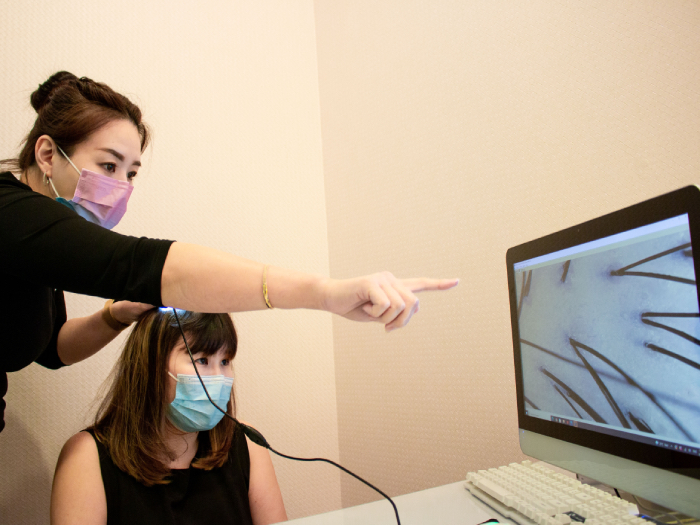 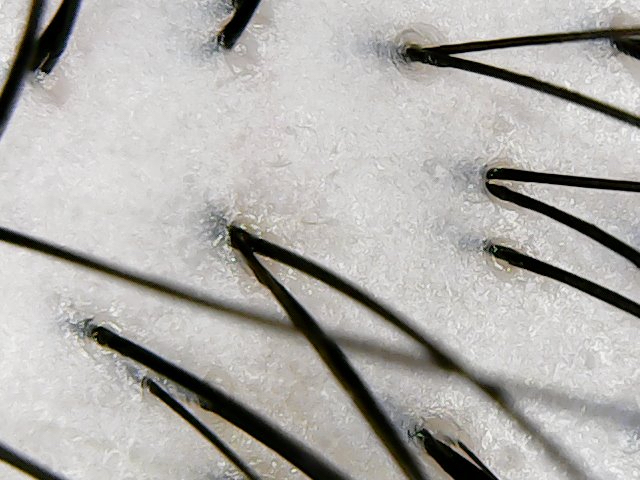 This time, it was obvious that the follicles were no longer clogged with excess sebum, and her scalp was a lot cleaner. 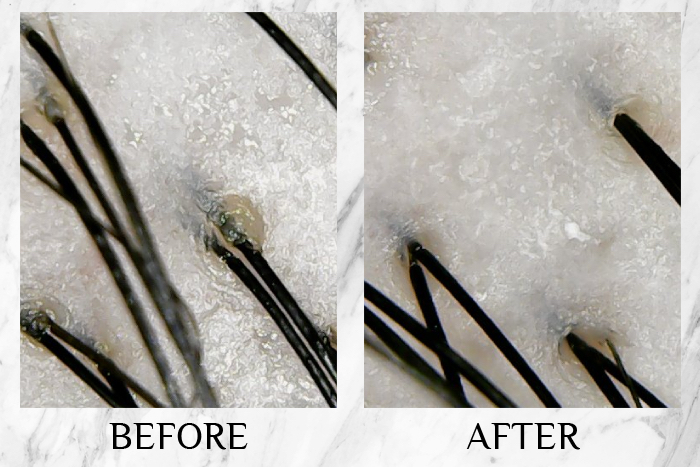 “At the same time, my scalp felt refreshed and my hair felt “lighter”. I was really shocked that I could see instant results after just one treatment!” Kristen commented. The treatment lasted approximately 1.5 hours, which is pretty reasonable especially for those who have a busy schedule.

“Overall, I had a great experience at Bio Organicare.

I was initially a little afraid that there may be some pain or discomfort during the treatment process, but I was pleasantly proven wrong because the entire treatment felt more like a relaxing spa day for my hair, especially with the professional service and the pampering massages that I got,” Kristen shared.

She also found her hair consultant to be very knowledgeable as she was able to explain her scalp condition clearly during the consultation process. Her hair therapist was also equally skilled and experienced as she talked Kristen through every step of the treatment process.

“As such, there was no one step where I was left confused over what my therapist was doing to my scalp and hair. Furthermore, she was approachable and friendly, making it easy to talk to her and share any queries that I had.“

Kristen also found that just like what the reviews on Google and Facebook have said about this hidden gem, the therapists here are all very professional and knowledgeable.

They have also been complimented for how they aren’t pushy at all, so you won’t be experiencing any uncomfortable hard-selling when you’re here.

“I wholeheartedly agree and I definitely see myself coming back here for more treatments,” Kristen said.

If you’re interested in trying it out for yourself, you can enjoy a customised treatment at a trial rate of S$48 (U.P. S$296). To claim the trial rate, simply quote Daily Vanity when you contact them via WhatsApp!

This article is brought to you by Bio Organicare.