I was afraid to bleach my hair for the first time, but this hair treatment changed everything 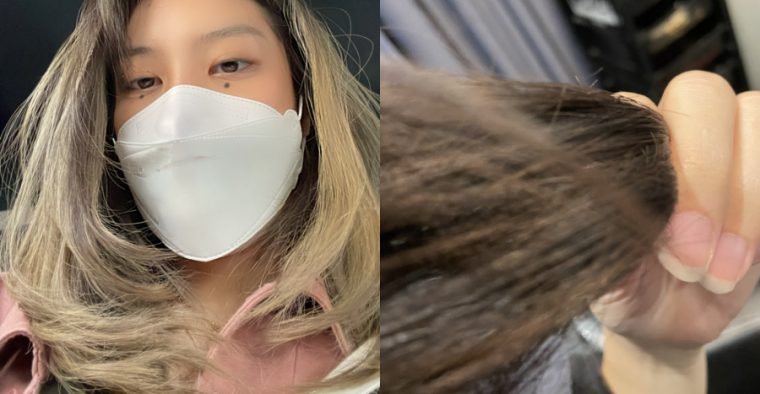 Despite admiring soft ash brown tresses on my Pinterest board and Blackpink Rosé’s angelic blonde mane, I had never dared to let bleach or dyes touch my hair – all my life.

Coloured tresses look great, but I seriously feared damaging my natural locks and having to put in lots of effort to restore a fraction of their health after.

So, when hair salon Chez Vous invited me to test out their newest hair treatment that promised to reduce damage to chemically-serviced tresses, I have to admit… I was hesitant.

Then again, it did promise to reduce the damage by half. Perhaps it was now or never to bring a brand-new refresh to my virgin black mane. Surprise, surprise, I ended up giving a part-nervous and part-excited yes to trying out their treatment.

What is Chez Vous’ hair treatment? Before heading to the salon, I read more about what Chez Vous’ Hair Defence Technology promised to do for my hair.

Rather than seeking to repair damage after dyeing, perming, or straightening the hair, this hair treatment prevents damage before it happens, which is what makes it different from most other hair treatments.

The treatment is carried out in various steps as you get your hair done, but takes just 15 minutes in total – not a total hassle when you’re already spending a long time getting your hair dyed at the salon.

Still, I had a hard time picturing how the treatment would be carried out, so I decided the best way for me to find out was to see for myself. Upon entering the salon, I was warmly ushered to my seat and handed a small menu from which I could choose from hot and cold drinks, as well as snacks. 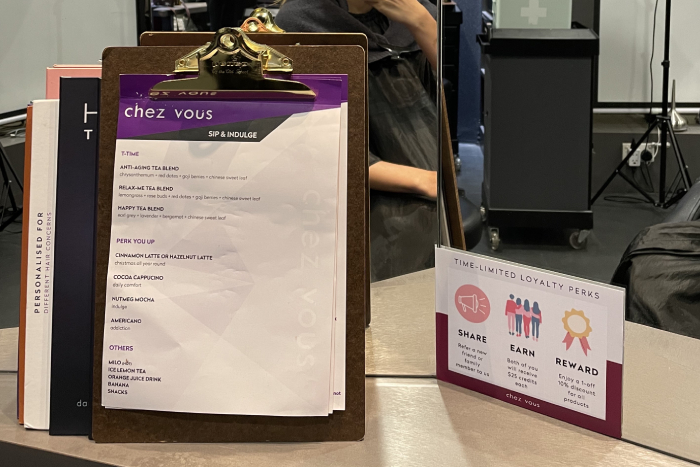 After I chose my beverage, my stylist started off my appointment by asking me what I wanted to do for my hair, and advising me on a style that was best for me. I wanted to trim the lengths of my hair and my bangs, and he suggested to even out the layers.

Ready to hear the satisfying snips of the scissors, I was surprised to find out that it wasn’t time for a haircut just yet. Instead, it was time for the first step of the hair treatment: applying the K18 peptides.

The stylist sectioned my hair and sprayed it down with the K18 Peptide Mist, designed to protect the core of my strands. K18 peptides would reconnect the innermost polypeptide chains, improving my hair’s resilience against damage later on. 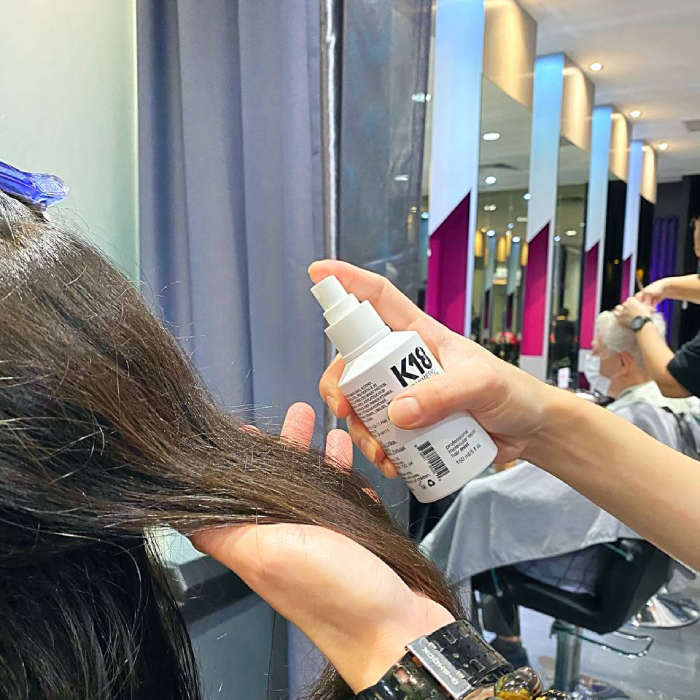 It didn’t take long for my stylist to be done with that step; he proceeded to give me the haircut I was waiting for.

Next came part two of the Hair Defence Technology treatment: another round of misting my tresses. The stylist again separated my hair into sections and sprayed it thoroughly with a mix of patented electrolysed water and 18 different amino acids. 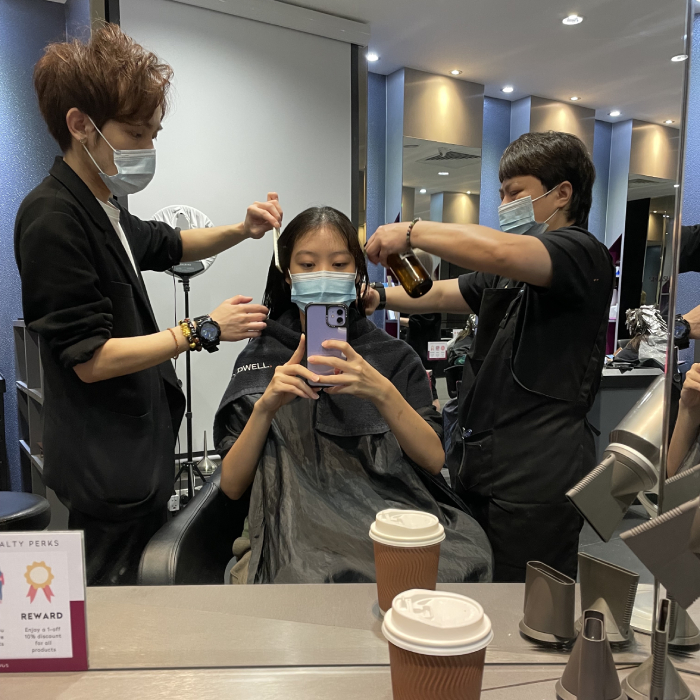 They explained that the hair cuticles naturally have a positive charge, which repels hair treatments and prevents them from fully entering the hair shaft. To neutralise the positive charge and allow the amino acids to enter, the electrolysed water is applied to the hair.

When the amino acids are able to enter the shaft and fill it up, the hair becomes less porous and less prone to damage.

Be prepared for lots of spritzing, because the next step was to spray a cortex CMC solution onto my locks.

The cortex CMC (nanosized cell membrane complex) replenishes the lipids between the cortex and the cuticle of the hair, allowing the hair strand to retain protein, oil, as well as moisture, which are important for healthy locks. This was followed quickly by a blow-dry to ensure that all the ingredients are locked into the hair strands.

I assumed that a hair treatment like this would make my mane feel silky-smooth, but the staff told me that that’s not what this hair treatment will do.

The hair, he said, would instead feel “fat” to the touch because it’s filled with all the good ingredients. I put my fingers to my locks, and indeed it was like how he had described it, plump and slightly tacky.

Still, I hoped that was not how my hair would feel at the end of the entire treatment. After my mane was blown dry, we moved straight on to bleaching my hair – one step closer to the ash brown balayage that I came here for.

The stylist deftly applied bleach to my hair and wrapped the many sections of my hair with foil. As he worked across my head section by section, he also continued to check on the earlier wrapped foils to make sure that the bleach was sitting right.

When I was beginning to feel the weight of the many foils (that were starting to look like medusa coils on my head), it wasn’t long after that the stylist wrapped up the bleaching process.

After heating the foils for some time, my hair was ready to be rinsed out.

I was led to the basins that were in a dark area in the salon. There, I lay back and let a stylist rinse the bleach out of my tresses.

She applied a seaweed algae extract mask, and left it in for five minutes while I closed my eyes, letting myself be blanketed by the room’s darkness (ah, now I understood why the room was this dim). 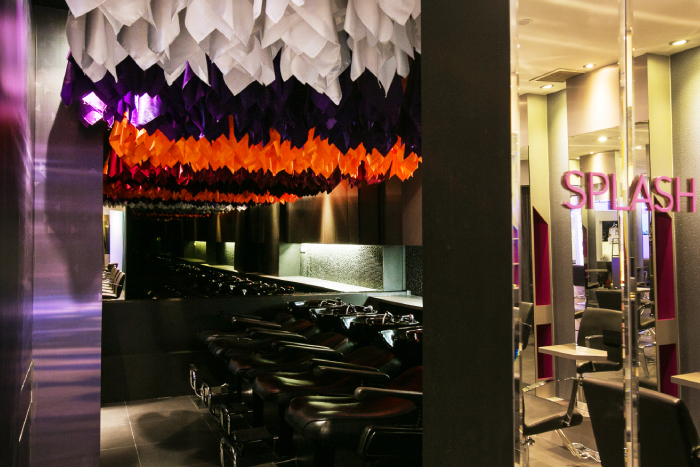 Five minutes later, the stylist re-entered the room to wash my hair. She gave me a really comfortable head massage whilst at it, running her fingers firmly over my scalp and the base of my head.

It was over all too soon, and I headed back to my trusty salon chair, where another round of K18 and CMC was applied to my tresses to restore the moisture that was lost during the bleaching process.

Then, two stylists attended to my damp (and for the first time, yellow!) tresses, slathering my locks with grey, then brown dye. Bit by bit, my hair began its transformation from bleached yellow to a muted ash brown. This was it, soon enough I would get to see the final results revealed!

Finally, after a final round of rinsing out the hair dye, I walked out of that room and saw my hair in a new light – literally. It was the ash brown balayage from my Pinterest boards, realised on my once black tresses. 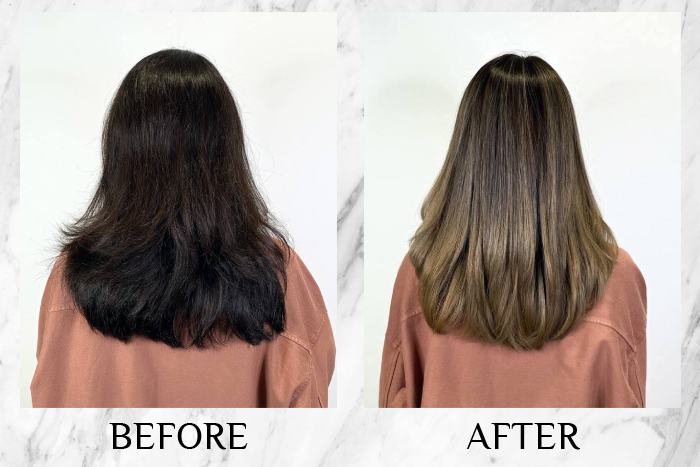 But the true question remained as to whether Chez Vous’ hair treatment really did reduce damage to my newly coloured tresses.

I touched my dyed hair after everything when completed, and was taken aback by how it still felt “fat” as well as dry. I reminded myself that this was my first time experiencing bleached hair, and the only comparison that I had was against my previously natural, smooth locks. Still, I thought, oh no, this was how my hair was going to feel from now on.

Surprisingly, after about a week of getting used to and learning how to take care of my coloured tresses, they didn’t feel the same as they did when I had just left the salon.

Instead of dry and stringy, they felt (and now still feel) not too far in quality from my natural hair. I can run the bristles of my brush through my hair easily, and my hair also feels smooth to the touch.

I also recalled what the Chez Vous staff mentioned to me at the salon, which was that bleached hair, by default, has less ability to spring back because of the “holes” in the shaft that are caused by chemical damage. Since the salon’s hair treatment “fills in” and strengthens the shaft, the hair should be stronger and less stretchy.

Wanting to put it to the test, I took a loose strand of my half-bleached and half-natural hair (balayage, remember?) and pulled at both sections. The bleached portion still did have more stretch than the natural part, but, altogether, it still felt rather strong and healthy – more so than what I had expected.

I give partial credit to the post-salon hair treatment that I’ve been using, the Diâne Extra Damage Repair Treatment, which makes my hair feel much smoother and more moisturised.

The Chez Vous’ Hair Defence Technology did what it promised to: protect my coloured tresses from too much damage.

With my bleached hair still feeling healthy and manageable, I’m already tempted to dye my hair a fresh new shade. From virgin black tresses to ash brown balayage, you could say that I’m officially a coloured-hair convert.

At S$455 + 7% GST, you can get a Chez Vous Hair Defence Technology promotion package, which includes: