Urban Decay Troublemaker mascara boldly claims to be SEX-PROOF! We put it to the test – in a hot and heavy situation, of course! We’ve always known that Urban Decay can be a little irreverent, but they pushed the boundary again by launching a mascara that claims to be “super-fat”, “super-long”, and “sex-proof”. 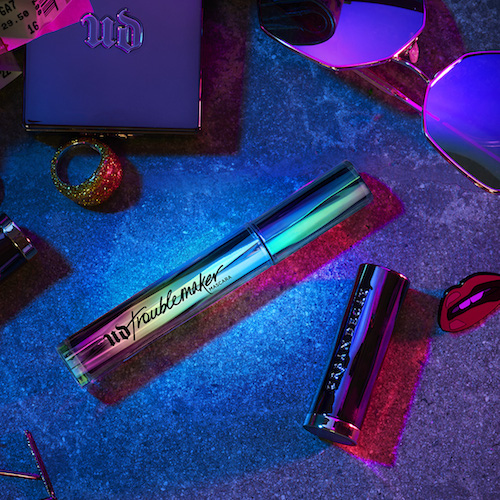 Called the Urban Decay Troublemaker Mascara, this is said to increase your lash volume by 13.7 times. It comes with a custom brush that grabs onto lashes while separating them, so that every lash can be coated with the formula while fanning out beautifully.

The Urban Decay product development team also says that they have tested it in all types of hot and heavy situations, including in saunas, snowboarding, and yes, sex.

If you’re looking for something that’s extremely dark, you’ll be pleased to know that the formula combines two types of pigments to create an intense shade.

The package is also beautiful. The Urban Decay Troublemaker Mascara comes in a double-walled faceted tube with a prismatic finish – extremely gorgeous.

But does it live up to its claims?

These big claims are nothing but marketing-speak unless you can prove them. You know that the Daily Vanity team likes to put products to the test, and we decided to see if they can really live up to their claims.

Urban Decay Troublemaker mascara review: Is it super-fat and super-long?

I have pin-straight lashes that can’t hold up mascara very well, but I am impressed by how the Urban Decay Troublemaker mascara managed to lengthen and add volume my lashes. On your left: With Urban Decay Troublemaker mascara | On your right: Bare lashes

On your left: Obvious lashes from profile | On your right: Lashes can’t be seen

While it took a few coats to get what you see in the pictures, I consider its performance pretty good. I find that the ultra-black formula also helps with accentuating the lashes, making it look more obvious than before.

I also like that it has a clump-proof formula. The brush seemed to help separate my lashes well and despite layering on a few coats onto my lashes, they never clumped.

I’m not sure about you, but telling your partner that you need to put on mascara before getting intimate because you need to do a review can be quite a turnoff. And I wasn’t about to say this to my husband.

However, since the sex-proof claim of the mascara is a nod to how the product holds up and remains smudge-proof even in hot and steamy environments, I thought that the best way to review it would be to wear it to an onsen!

I visited Yunomori (an onsen spa in Singapore) wearing no makeup except the Urban Decay Troublemaker mascara to see if it held up. This was how it looked after 20 minutes in the onsen. Take note that I didn’t get any water directly onto my face, and the smudges were likely to have been caused by steam and perspiration.

As a mascara, it definitely does a good job, delivering great volume and length, as well as an appealing jet-black formula. It holds up pretty well on a regular day – only if your regular day isn’t too hot and heavy. I’ll still recommend it if you want a good mascara for everyday use, but for special nights, just go commando (on your lashes, we mean!)

The Urban Decay Troublemaker Mascara (full-sized) retails at SGD38, and will be available at all Sephora stores and Urban Decay free-standing stores from 26 October.

A travel-sized version is also available at SGD18, and will be exclusively available in all Sephora stores and online from 26 October.

Finally, you can also get hold of the limited edition Troublemaker Mascara and Eyeliner Kit (SGD45) for a limited period of time and while stocks last, at all Sephora stores, Urban Decay Free-standing Stores, and at Sephora online store from 26 October.