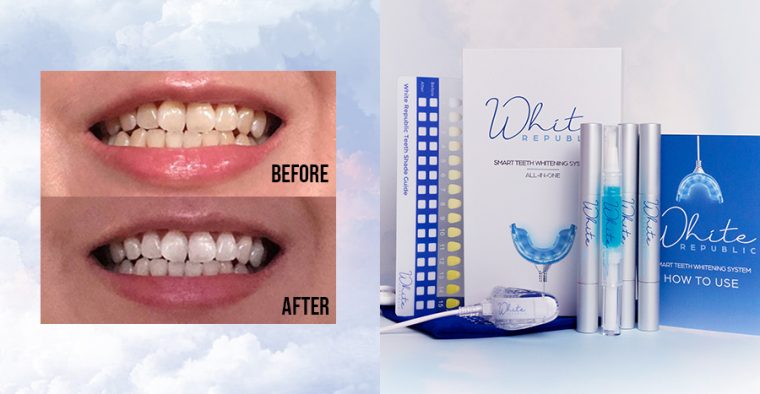 As luck would have it, plenty of enjoyable things in life can stain our teeth. For me, a few cups of tea, that occasional glass of red wine, and even seemingly innocuous things such as tomato sauce and blueberries can leave my teeth looking yellowish and grimy. These foods and beverages cling onto my tooth enamel instantly, and I can’t get rid of them easily.

On top of that, regular mask-wearing has exacerbated the issue. When we breathe through our mouths, we produce less saliva, which could invite more bacteria that may worsen the yellowing of teeth. Of course, strangers won’t be able to see my teeth and my loved ones couldn’t care less, but those stains can take a swing at my confidence at times.

In a bid to brighten my smile, I’ve tried at-home treatments like whitening strips and trays. After a couple of weeks, however, I would be met with disappointing results and side of tooth sensitivity. Of course, a professional, in-office treatment is the most effective option, but they often come with a hefty price tag and a higher likelihood for tooth sensitivity.

So when White Republic sent down their popular Teeth Whitening System for me to try, I was thrilled. I couldn’t wait to see if the whitening kit was able to give me pearly whites.

What’s in the kit 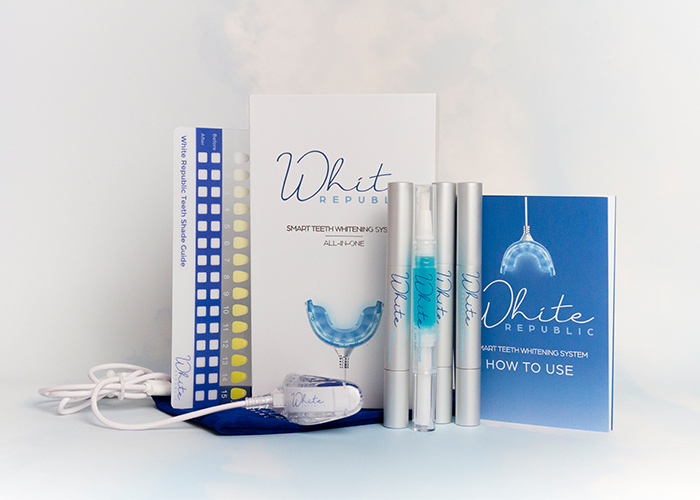 The kit arrived in a white, compact box and featured three Whitening Gel Pens, a Desensitizing Gel Pen, and an Activated LED Light mouth tray. It even has a gorgeous lapis blue velvet pouch to store the mouthpiece and cable in. 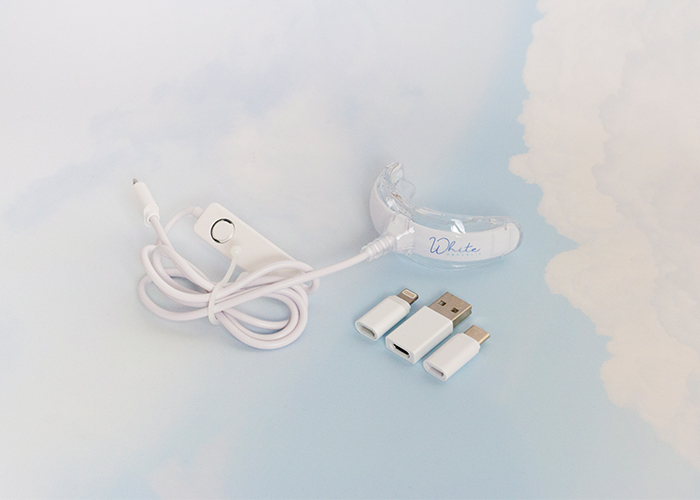 To turn on the LED mouthpiece, the kit also included three connectors: a USB to connect to the cable to a laptop or computer, a USB Type-C for an Android phone, and a Lightning connector for iPhones. This way, you can watch shows on your computer and laptop, or scroll through your social media feeds while the Activated LED Light gets to work. 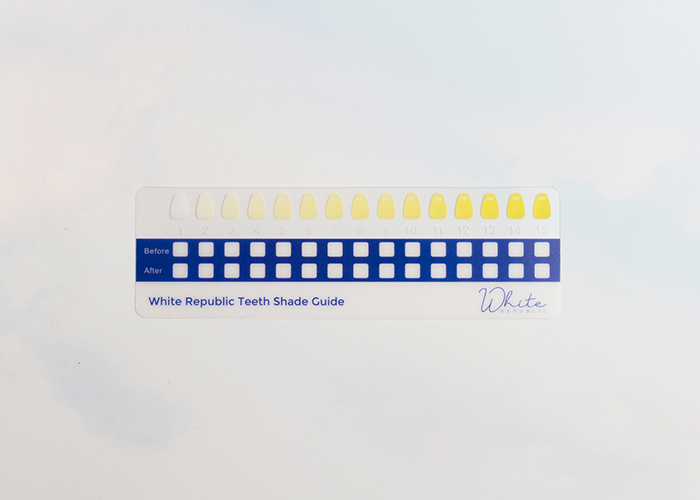 White Republic’s Teeth Whitening System also included a Teeth Shade Guide, so I could track my progress easily from the very first day. I snapped a selfie whilst holding the Teeth Shade Guide, and my teeth seemed closest to shade 7 or 8 – yikes.

Before I tried the White Republic Teeth Whitening System for the first time, I referred to the User Manual, which provided simple, straightforward instructions on how to use the treatment at home.

How to use the White Republic Teeth Whitening System

To prep my teeth for the treatment, I brushed my teeth and rinsed the mouth tray with water. This prevents any bits of food or leftover residue from hindering the treatment’s performance. 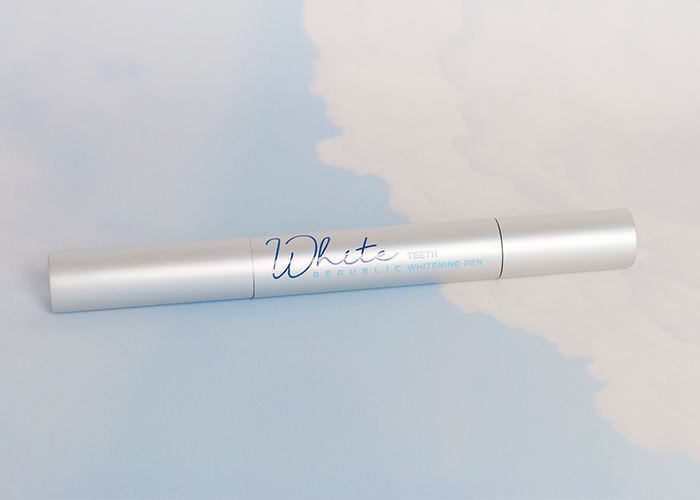 Setting the mouth tray aside, I reached for the Teeth Whitening Pen. The gel it houses contains carbamide peroxide, which is similar to hydrogen peroxide, another active ingredient that can be found in plenty of teeth whitening treatments. 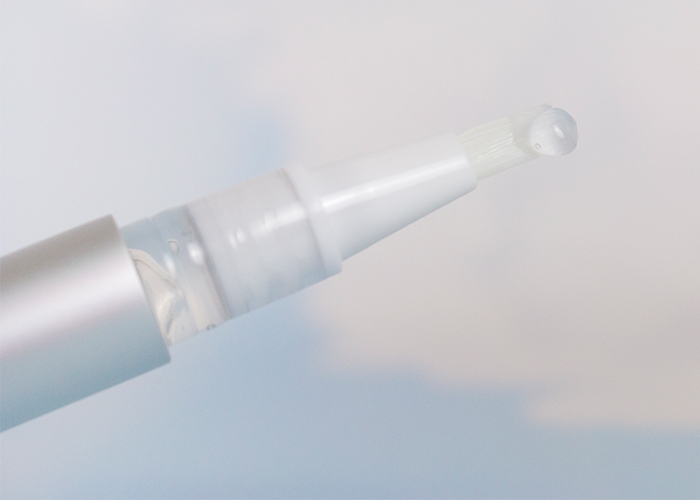 Following the instructions in the user manual, I twisted the pen slowly, letting the gel flow through the brush. Then, I brushed the whitening gel evenly on each tooth, making sure they’re properly coated in the formula. After all, you won’t want to end up with patchy results.

I also avoided applying the whitening gel on my gums and lips because it may cause a slight burning sensation – a lesson I learned the hard way with previous teeth whitening treatments that came in syringes. With White Republic’s whitening gel, however, it was easy to apply the gel more accurately with its slim and precise brush tip. 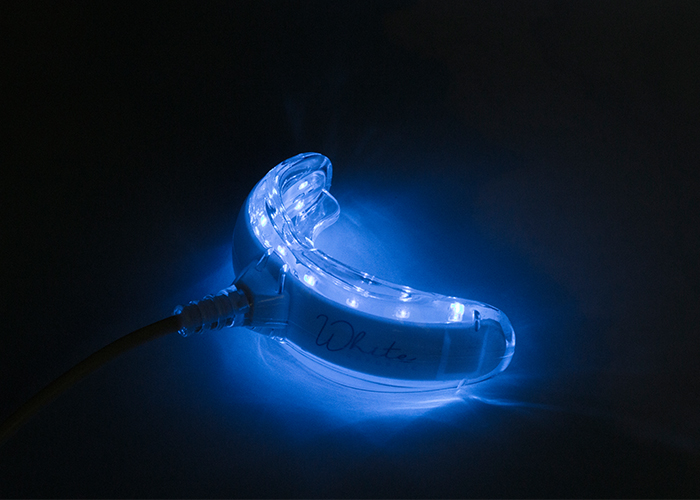 When I was ready for the treatment, I attached the USB connector and connected the cable to my laptop. After I wore the mouth tray, I hit the button located along the cable and turned the blue LED light on.

In case you didn’t know, LED lights emit a frequency that can speed up the activation of hydrogen peroxide or carbamide peroxide (found in White Republic’s whitening gel) to whiten your teeth. This is why you can’t use the whitening gel on its own and expect to see the same results.

To relax and unwind after a long day, I plopped myself in bed and tuned in to an episode of Legion on Disney+. Before I knew it, the device beeped and the activating light turned off automatically – my 16 minutes were up.

After rinsing my mouth and washing the mouth tray, I got up close to the mirror, inspecting my teeth. One session actually managed to lighten a few areas, which I was really impressed by. I couldn’t wait to see the results after two weeks of use. 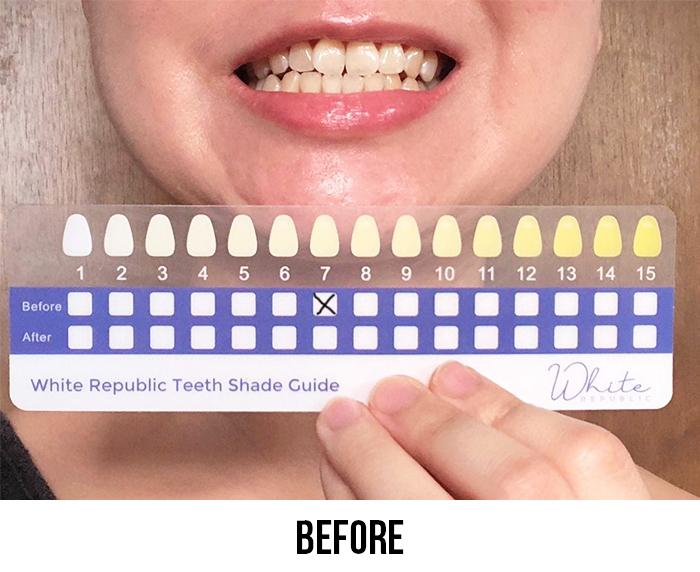 After two weeks, my teeth were five shades lighter! Granted, they didn’t turn into a celebrity-standard shade of white, but my teeth were the whitest I had seen them in a long time.

There were still a few patches of discolouration on my teeth, but those didn’t bother me much. During those two weeks, strongly coloured foods like coffee, tea, and laksa were off the menu as a preliminary safeguard as well. After all, I didn’t want to ruin the efforts of the White Republic Teeth Whitening System. 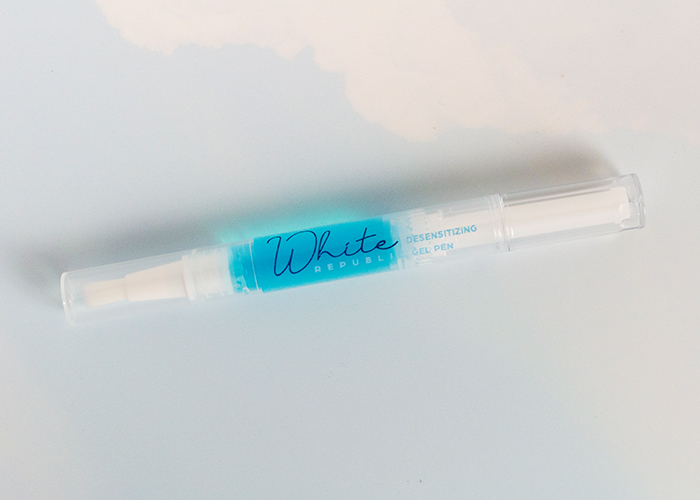 At first, I was sceptical about how effective this LED teeth whitening would be since I’ve had numerous failures with at-home whitening kits. But these results were evident. The treatment was easy to use too. All I had to do was coat my teeth in the whitening gel and let the LED light do its thing before bedtime for seven to 10 consecutive days. After that, I can use it once every two weeks for maintenance.

What’s more, the Teeth Whitening System retails for only S$95, which is a steal compared to dental services and other teeth whitening treatments. If you run out of the whitening gel, White Republic also offers a refill pack, so you don’t have to purchase a brand new set each time.

If you’re looking for a painless process that yields quick results, White Republic’s Teeth Whitening System does the job. So whether you’re prepping for a big day or you simply want to boost your self-esteem, this whitening treatment is a great life hack to get your pearly whites restored.

This article is brought to you by White Republic.