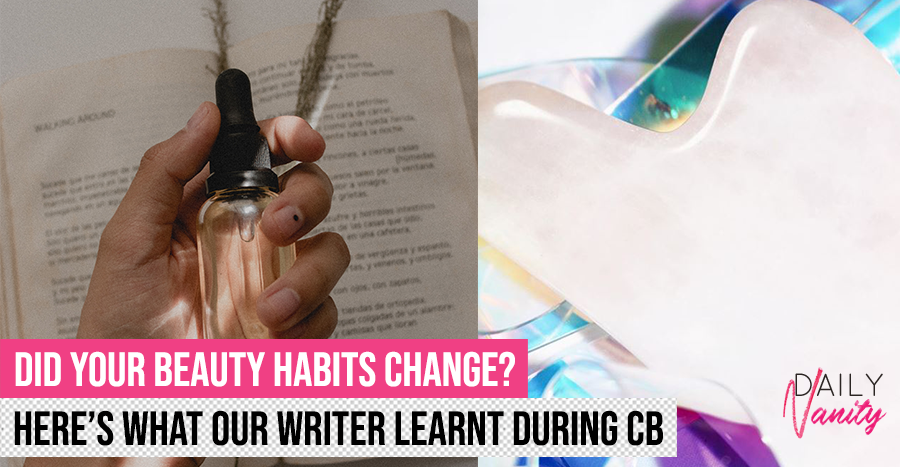 Talking about beauty might seem frivolous in trying times like these. However, beauty is inherently tied to self-care, something that tends to our physical, emotional, and mental well-being. Ever since I started staying home, I’ve gotten more in-tune with myself and my beauty habits. And after two months of the Circuit Breaker, I’ve learnt five beauty things that I’d gladly continue to do after CB has ended.

Beauty things I learnt during the Circuit Breaker

1. Wear makeup if it makes you happy

✨Useful glitter tip below✨// Rue’s winter formal makeup PRODUCTS: I used @kevynaucoin ElectroPop palette’s burgundy eyeshadow color, applied with my fingers for optimal pigment. This was Rue’s hero color throughout Season 1, and the same color as her signature hoodie — you see the hoodie’s moment of origin in the montage of Rue’s memories that leads up to her drug relapse. Then I layered @glitterinjections Blueberry pressed glitter on top of the eyeshadow, which instantly made her lids two-toned. In some angles you just saw the reddish shadow, and in others you saw the blue glitter. This was exactly how the corsette part of her costume appeared in real life, which I was trying to imitate. I added @glitterinjections Star of the Sea pressed glitter to her temples, which has tiny iridescent stars in it. For the “pool of tears” effect under her eyes I used @lemonhead.la Houdini because it’s a gel and I wanted that to stay put. ?IMPORTANT GLITTER TIP: Pressed glitters work really well on top of powder eyeshadows, but the glitter may travel a bit to other parts of your face. Glitter gels, while they will stay exactly where you put them, will completely muck up a regular powder eyeshadow. Gels work the best either alone or on top of a longwear eyeshadow cream or liner. ? Part of the reason why I wanted to include “Houdini” in Rue’s makeup is because we saw that color on Jules earlier on at the carnival. Since Jules was “doing” Rue’s makeup for the winter formal I wanted her to use something that we had seen on her before, a product that Jules “owned.” Honestly I have no idea if anyone picks up on these tiny details, but these kinds of things definitely inspire my designs. I used a @makeupforever pencil in Free Burgundy to line her lower water line, @macpro face & body foundation, @beccacosmetics shimmery powder blush in Songbird and @beccacosmetics Lush Lip Colour Balm in Cherry Ganache. I topped off the look with an iridescent star by @face_lace placed under her left eye, mimicking the billboard image, which was a film still of Rue from Episode 1, where she had a smaller star in the same place. ? @likethejetsons #euphoriahbo #euphoriahbomakeup

I’m quite a practical person, so wearing makeup at home isn’t necessary for me to tackle the day ahead. That being said, I work in a beauty publication for many reasons — one of which is the joy I get from experimenting with makeup.

The Circuit Breaker has given me plenty of time to catch up on TV shows, and Euphoria (above) has easily become one of my favourites. The eye makeup looks put me in a trance, so I looked up Doniella Davy, the show’s makeup artist. After trawling her Instagram feed, I bought myself a jar of Lemonhead LA Houdini Spacepaste, a glitter paste that looks magical when it catches the light.

Since then, I’ve been playing around with it by smearing some on my lids or under my eyes. (Doniella’s go-to are glitter tears.) I can do this whenever I want, and that’s the beauty of it. If putting on makeup at home makes you happy or gives you a sense of control, then do it. We all have our ways of dealing with the pandemic, and it shouldn’t be shamed.

2. Give your skin a break when it needs one

Since we’re all cooped up at home, I thought it would be a great time to try out the lotions and potions I’d been neglecting. With all that constant product rotation, you can probably guess what happened next. My carelessness paved the way for clogged pores, breakouts, and a flushed face. (Go on then, I can feel you shaking your head as you read this.)

A five-step routine became a 12-step one, and it presented way more problems than the products claimed to solve. However, I’ve since pared my routine down to three simple steps: cleanse, tone, and moisturise. On top of that, I’ll also layer on sunscreen during the day and remove it with an oil cleanser at night. 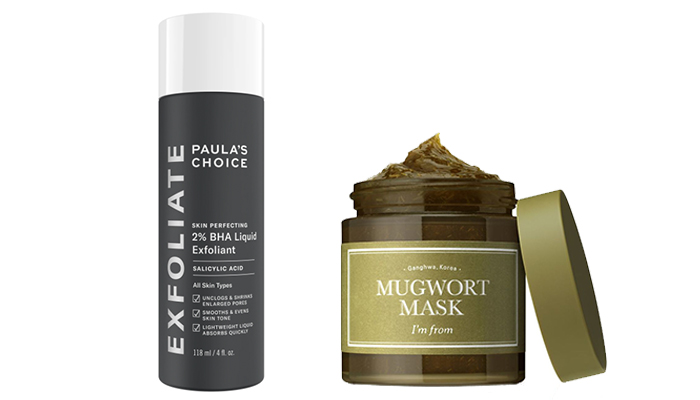 If my skin needs a hand, I swipe the Paula’s Choice 2% BHA Exfoliant (left) on congested areas or smother it with I’m From’s Mugwort Mask (right). The latter sounds like a wizard’s concoction and smells like Chinese medicine, but it really brings down the redness on my cheeks and forehead.

Of course, when new skincare launches start landing on my desk again, I’ll scramble to unbox them and try them out. But if my skin’s feeling a little overwhelmed, at least there’s a healing routine I know I can run back to.

3. Put on a pimple patch to prevent acne scarring

As someone who regularly picks at her skin, keeping my hands off my face can be a challenge once I’ve honed in on a zit. Since mittens are out of the question, I’ve learnt to stick pimple patches on blemishes to prevent scarring. 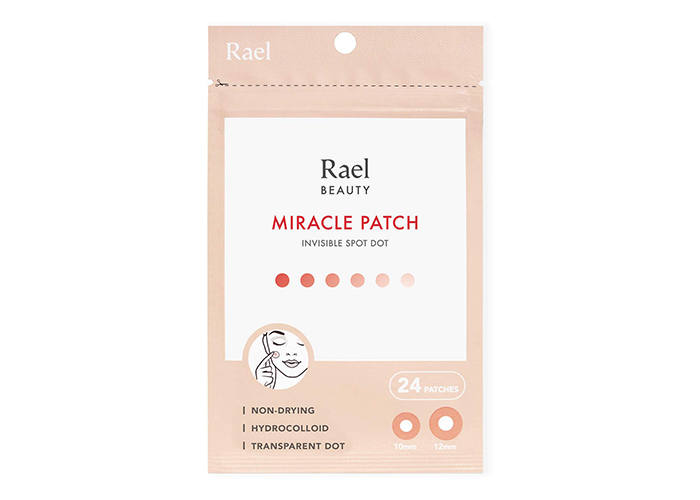 Rael’s Miracle Patches (above) are thin hydrocolloid patches that look pretty invisible when you tack them on, so you can wear them out. I came across some of the cutest pimple patches and rounded them up in a recent article too. I plan on adorning my face with a few of them when we can all head out for drinks and karaoke.

4. Slow down your beauty routine

The pandemic can take an emotional toll on anyone. Add a chunk of stress from work or home into the mix, and you’ve got yourself an impending breakdown. To unwind, I turn up the volume on my portable speaker while I take a long shower. This really helps to melt away any anxiety and tension. 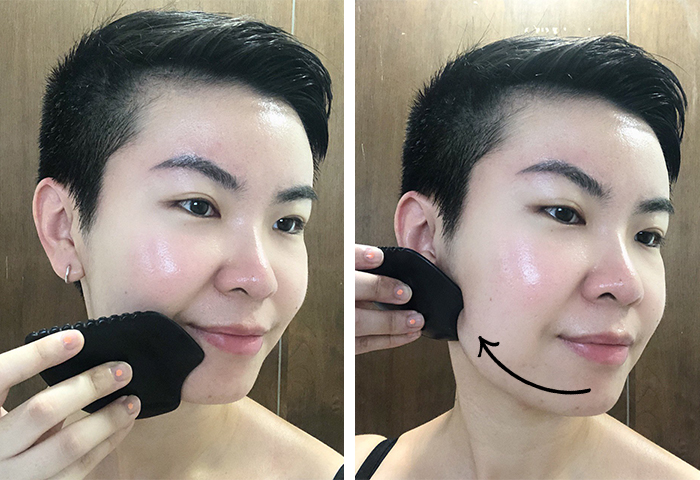 A surprising thing that has helped ease my stress during this period is giving myself a gua sha facial massage (above). Similar to a regular massage, gua sha relaxes my facial muscles and puts me in zen mode. After doing this for about two months, I haven’t found the need for a depuffing eye gel or vitamin C serum. My skin has been able to heal quicker on its own too, and it looks more radiant now.

If you’re unsure of how to use the gua sha tool you have, I’ve put everything you need to know about it in a step-by-step guide here. Take your time while you’re doing it—it’s all part of keeping your stress levels down.

5. Heal your skin from within

When I’m snowed under with stress, my skin reacts very visibly. It shows me that it has had enough by flaring up in red patches and planting seismic zits on my face. So when I read about adaptogenic supplements one day, I knew I had to try them in a bid to heal my body.

Our cortisol levels spike when we’re feeling overwhelmed, which can signal our sebaceous glands to produce more sebum. That’s a one-way ticket to clogged pores and acne. What adaptogens do is help your body adapt by lowering your cortisol levels. These herbs can also offer immunity-boosting benefits to support your overall well-being. A huge plus during a time like this.

BUILD RESILIENCE//⁣⁣ Cortisol out of balance can weaken your immune system. SuperYou contains four potent adaptogens that work to regulate cortisol and address the effects of stress on the mind and body. ⁣ ⁣ Get it @sephora.⁣ ⁣⁣ #SuperYou #moonjuice #sephora⁣

After taking Moon Juice’s SuperYou Daily Stress Management (above) for about two weeks now, I definitely feel a difference. While I still experience stress and all its wonderful anxiety-inducing effects, I feel calmer when faced with new challenges. My skin doesn’t erupt in spots as much, and I sleep better at night too. 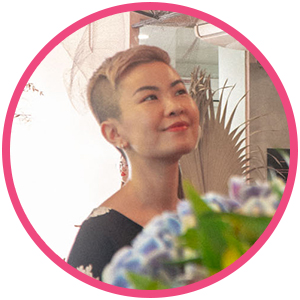