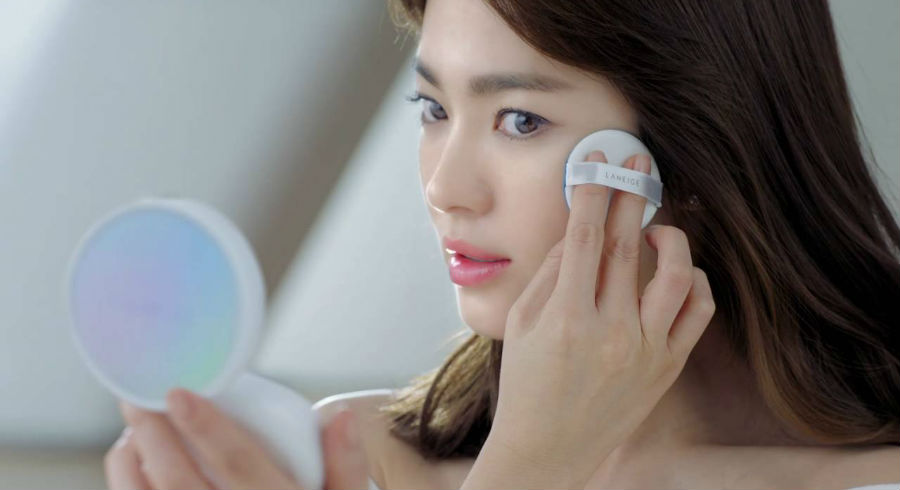 The first cushion compact was only launched in 2008, which means this innovation is only less than 10 years old.

Invented by the researchers at Amorepacific, the largest cosmetics company in Korea, cushion technology was developed because of their dream to be able to handle liquid like how you would with solid.

According to Kyung-ho Choi, Head of Cushion Lab at the Amorepacific R&D Unit (yes, they have a dedicated “Cushion Lab”!), creating a “liquid that does not flow” was the main idea they were going for. Sketch by researchers at the Cushion Lab that shows what they hope to create.

After exploring different materials and ploughing in much research efforts, Amorepacific finally created the cushion foundation that we know of today.

They discovered that the polyurethane foam fulfils the requirement they were hoping to achieve, and created the IOPE Air Cushion Sunblock as their first-ever cushion product. Since then, a brand new product category has been born.

If you’ve been following beauty trends, you’ll know that cushion foundations are now one of the must-have products in every makeup pouch.

Today, Amorepacific has a dedicated Cushion Lab staffed by researchers who look into how they can improve the existing cushion technology they have developed. The team has already launched four generations of cushion, each with technology that tops the previous ones to provide better user experience to consumers.

There have been many “me-too” cushion products launched by other brands thereafter. Kyung-ho Choi explains that while there are existing patents for Amorepacific’s unique cushion technology, other brands have found ways to get around them and create their own version of cushion foundation.

He told Daily Vanity that, nonetheless, they are not worried about the launch of these products. In fact, he feels that the accessibility of these products encourage more people to embrace the use of cushion products, which is good for the market.

What can we expect to see in 2017 for cushion products? The Sulwhasoo Perfecting Cushion Intense is the latest cushion product to launch this year. It has anti-ageing skincare benefits and the ability to cover the appearance of wrinkles.

The Amorepacific’s Cushion Lab is not sitting on their laurels after creating several outstanding cushion foundation products that many have tried and loved. You can expect these from them in 2017 and coming years:

2. Better technology for your needs: Amorepacific has launched their fourth generation of cushion in 2016. The new technology focuses on ultra-fine dispersion, which refines the particle size in the cushion formula by 30%. The cushion itself has also been improved. Now, it has a 3D technology that releases the formula more evenly. Improving the current technology to offer better finish and usage in the future is another key priority of the Cushion Lab.

3. Cushion technology used in more products: Most people already use cushion foundations. But did you know that Amorepacific has launched makeup base, blush and more recently, brow makeup in cushion formats? But the types of products that could be improved with the cushion technology have not been exhausted. Kyung-ho Choi reveals that other possible applications they are looking at would be in products for the body and products for men. He also shares that cushion eyeliners have already been launched in Korea and are well-liked by users.