Dermal fillers and fat grafting in Singapore: Everything you need to know about these aesthetic treatments 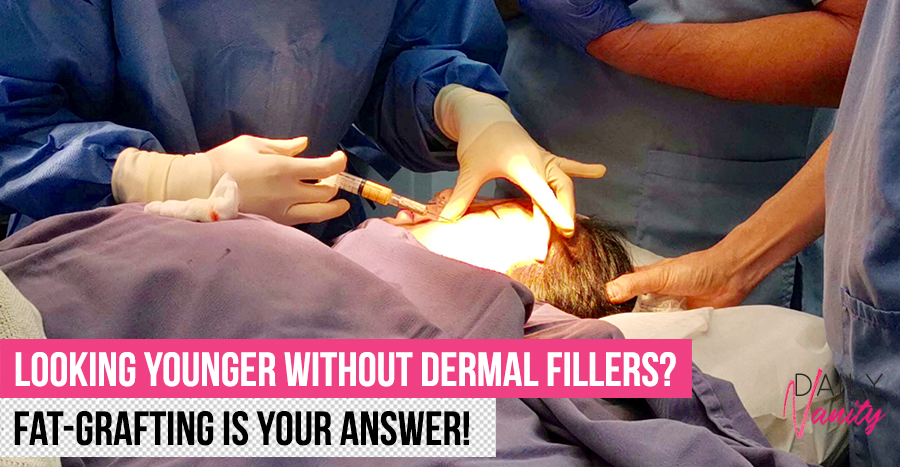 Ageing is a ruthless process and before we know it, our face is sagging, our cheekbones are a little sunken in, and there are one too many wrinkles on our face for our liking. To fight against these damages, many turn to dermal fillers to bring back the look of fullness and youthfulness to our face.

However, despite the popularity of dermal fillers in Singapore, some of us are uncomfortable with the thought of injecting foreign substances into our body. If that sounds like you, read on to find out more about fat grafting – an alternative to dermal fillers that uses your own body fat as fillers so there is less risk of potential incompatibility with your body.

We checked in with Dr. David Loh, from David Loh Surgery, who is accredited by the Ministry of Health to perform liposuction and fat grafting, to find out everything you need to know about fat grafting, including what it is, its advantages over dermal fillers, and where you can get it done in Singapore.

Derma fillers: What are they?

Before we learn more about fat grafting, a new alternative to derma fillers, let’s first understand what derma fillers are.

An injectable aesthetic treatment that is administered at different depths, typically used to help fill in where wrinkles are, derma fillers treatment is one of the most popular in Singapore. Besides filling in wrinkles, it also helps to improve facial volume and can even change the look of facial features so they appear smoother.

This treatment has temporary results as fillers will eventually be absorbed by the body and the patient will need to return to the clinic for a top-up in order to sustain the result.

Fat grafting: What is it? 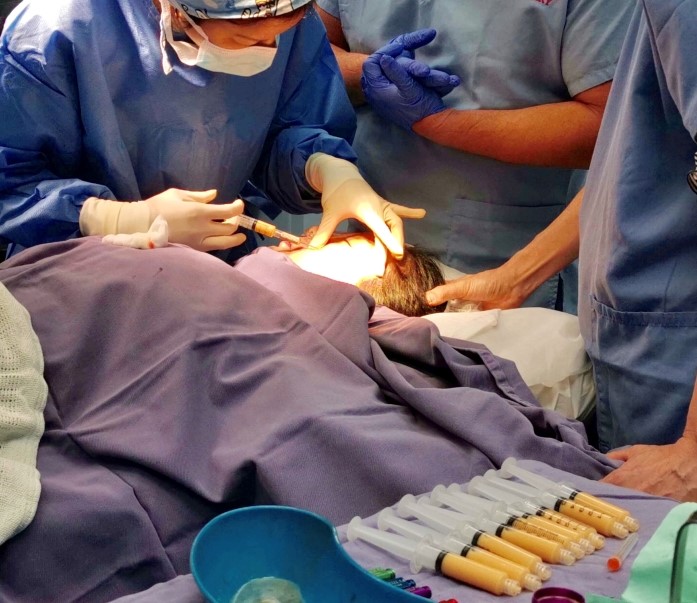 Fat grafting, also called fat transfer or lipofilling, is the technique of using the fats that were removed during liposuction, cleaned and filtered of course, to re-inject into areas on the face (or body) that need enhancement.

Dr. David Loh says fat grafting itself isn’t a new technique; it dates back to the 1970s where it was used to effectively add volume and correct irregularities on areas such as the breasts, buttocks, hands, and various areas on the face.

Fat grafting: How is it a safe alternative to dermal filler?

While fat grafting has been around for decades, it wasn’t able to replace dermal fillers until recently. With recent developments in fat grafting technology, surgeons can now separate the removed fat cells into various sizes, to replace fillers of different densities.

Fat cells can now also be shrunk into small particles, which can then be injected into the skin through a very fine cannula, making it a similar experience to getting filler injections for patients.

That’s why fat grafting is a great option for those who are considering facial rejuvenation treatments but are concerned about safety as well as the prospect of injecting foreign substances into their body. After all, with fat grafting, it is your own fat, medically called autologous fat, meaning fat that comes from the same body, that is used as fillers, so there is nothing unnatural entering your body. That is why fat grafting is considered a relatively low-risk procedure.

This is compared to derma fillers, which are chemically created to be similar to the makeup of human fat, in order to serve the same purpose.

Fat grafting is also a procedure that has several applications, which means it offers more versatility to the surgeon in helping patients achieve the look that they prefer.

Fat grafting: What are the different types? 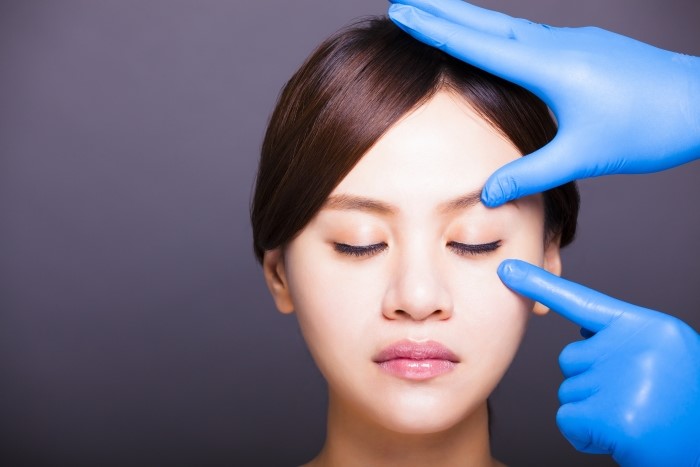 Fat cells of different sizes can be used for different grafting purposes and facial areas. There are three main types:

Milli-fat grafting uses fat particles of the largest size to replace fillers of higher density such as Juvederm Volux, Juvederm Voluma, Belotero Intense and Restylane Lyft to correct major areas of the face on a deeper level. Milli-fat grafting is often used to fill out deeper fat compartments to create a lifting effect on the face. The fat, when injected into the shrinking fat pads underneath the skin, restores the tension within the structure and improves firmness.

Micro-fat grafting uses fat cells of smaller size than those used in milli-fat grafting, to replace softer fillers such as Juvederm Volift, Juvederm Vobella, Belotero Volume, and Belotero Soft in plumping up the hollow of the cheeks, lips and temples.

Nano-fat grafting uses fat cells of the smallest size, mainly to replace skin booster or skin hydration fillers such as Juvederm Volite and Restylane Vital. Nano-fat grafting is often used in areas with thinner skin such as the eyes to treat textural issues such as wrinkles and fine lines.

According to Dr. David Loh, generally, each session of fat grafting will last for one to two hours, depending on the complexity and extent of the area of treatment. The procedure is performed under local anaesthesia for most patients. For those who are nervous or stressed, an anaesthetist will administer sedation to ensure their comfort.

A fat grafting procedure can be divided into three main steps: liposuction, filtration and re-injection.

The first step of a typical procedure is liposuction, where surgeon will extract a palm-size area of fat cells (approximately 100ml) from the patient’s abdomen or inner thighs, using one or more 3-5mm incisions.

The fat cells are then processed, by centrifuging, filtering and rinsing, in a closed circuit system to minimise contamination.

Finally, the surgeon will re-injected the filtered fat into the necessary facial areas using a fine cannula. Surgeons will typically inject more than the necessary amount to make up for the percentage of fat cells that will be absorbed by the body during the transplantation process.

The face will be swollen and may be bruised especially on the first few days. Patients can use a cold pack to minimise the swelling.

Patients might also experience some soreness and bruising at the donor area, but most patients are mobile and active the day after the procedure.

Swelling will peak around the fourth day. They can typically resume normal social life after the second day. Complete recovery often takes one to two weeks.

Fat grafting: Is it a complete replacement for dermal fillers? 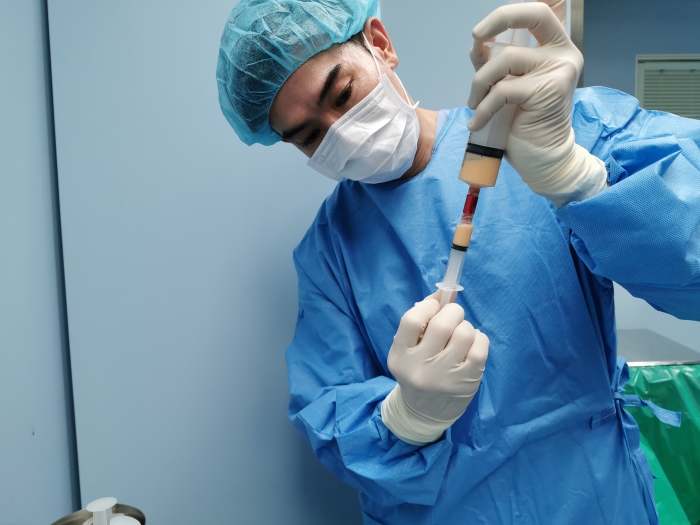 While fat grafting can replace most dermal fillers, it has to be conducted in a clinic with a proper setup for small-area liposuction and performed by accredited doctors, making it not as widely available as dermal fillers.

Aside from that, there are certain areas where dermal fillers are still the recommended treatment over fat grafting such as the lips and nose.

Dr. David Loh quotes his mentor Dr. Pierre Fournier, co-inventor of liposuction who is considered the founder of modern aesthetics, “fat should go only where fat belongs.” This is to say that fat might not look natural in areas that normally don’t have overlying fat pads such as the lips and nose.

There are also people who might not want to go for a surgical procedure, albeit a minimally invasive one, which means that dermal fillers are a better option for them since they don’t require surgery.

Fat grafting: Who should go for it?

Fat grafting is recommended for those with sunken areas on their face that need added volume such as the cheeks or temples, but have safety concerns about dermal fillers.

Patients will also need to have donor sites that provide enough excess fat to be removed and grafted onto the necessary areas.

Don’t worry if all this sounds rather complicated. The doctor will provide consultation before proceeding with the surgery to make sure fat grafting is a suitable treatment for you.

It must also be noted that, as with any surgical procedure, there is certain risk associated with fat grafting even though it is relatively low risk. Do consult the doctor carefully to fully understand the potential risk of the procedure.

Fat grafting: How long will the result last?

Dr. David Loh shares that the final result will be evident from the second month onward.

During the transplantation process, the body will naturally absorb some of the grafted fat cells within the first six weeks, while the ones that survive will continue as living cells in the body. That’s why the enhancement effect from fat grafting can be considered to be permanent.

The developments in fat grafting technique have allowed surgeons to shrink the fat cells prior to re-injection. Smaller fat cells mean that oxygen can diffuse more easily in the cells, which helps with the survival of transplanted fat cells in the body. As such, fat graft retention rates have been improved.

Fat grafting in Singapore: Where can you get this treatment as an alternative to derma fillers? 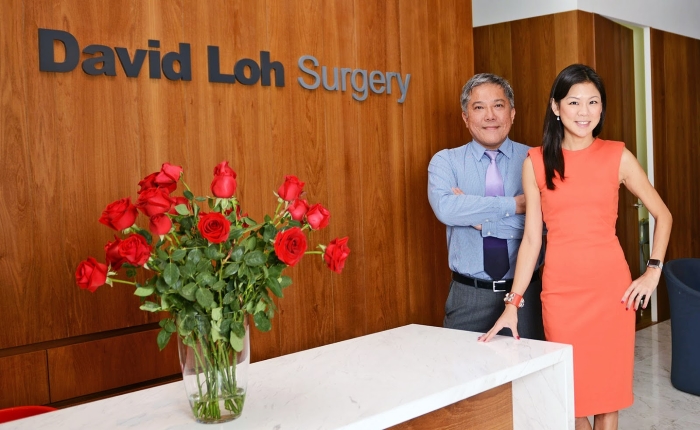 David Loh Surgery is a chain of two aesthetics clinics, founded by Dr. David Loh in 2002. Currently the President of The Society of Aesthetic Medicine in Singapore, Dr. Loh has had 18 years of experience in aesthetics, and is MOH-accredited to perform liposuction and fat grafting. Dr. Loh and his colleague at David Loh Surgery, Dr. Phoon Yi Shan, have also published several scientific papers in medical literature on filler injection techniques and complications management.

Fat grafting is primarily performed for the face, but they also offer fat grafting for other areas on your body for augmentation.

If you are unsure which treatment to go for or whether fat grafting is suitable for you, book a consultation and Dr. Loh will advise the appropriate treatment for you.

The cost of fat grafting at David Loh Surgery ranges between SGD3,500 to SGD7,500 before GST depending on the extent of treatment. This includes the cost of liposuction. Do contact them for an accurate quote.

Visit their website for more information regarding fat grafting as well as other treatments.

Recommended read: Vaser liposuction in Singapore: the guide to getting a flat tummy without exercise.