The Fenty Beauty foundation is sold out in your shade? We found and tested a drugstore dupe that’s 75% cheaper If you’ve been following beauty news at all, there is no way you would not have heard in some way or another the mad hype that’s been surrounding the Fenty Beauty Pro Filt’r Soft Matte Longwear Foundation.

YouTubers all over the world have been raving about how awesome it is, and if you have friends who own the foundation, you’ve probably heard them sing praises about it too.

After the recent Sephora sale, however, the foundation has been facing stock issues, not just in Sephora, but also on the Fenty website itself. Many of us who are only just jumping onto the bandwagon have been finding it incredibly difficult to get our hands on the correct shade. I know how you feel: I bought the wrong shade of the Fenty Beauty foundation at the Sephora sale, and since then, I haven’t seen my correct shade being sold in-stores or on the Sephora website.

However, I heard that Fenty Beauty actually has a drugstore dupe: the Catrice HD Liquid Coverage Foundation. Yes, you can find it at Guardian.

How are they dupes?

It’s really all in their formulas. Take a look at the highlighted ingredients in the list below: In any kind of ingredients list for any product, ingredients are ordered according to how much of them are present in the formula, in descending order. If “Water” is the first item on the list, then water has the highest concentration amongst all the other ingredients.

Fenty Beauty and Catrice share the exact same first 10 ingredients, which could mean that a huge percentage of of their formula is near identical. Furthermore, almost every other ingredient in Fenty’s formula (besides gum, sorbic acid, and fruit extracts) is present in Catrice’s formula, but in a different order.

In case you were wondering, we did check out the ingredients list of other matte foundations too, such as the Kat Von D Lock-It Foundation and the Maybelline Fit Me Matte+Poreless, amongst others. While they may have some similar ingredients, the overall lists don’t look anywhere near as identical as Fenty Beauty and Catrice do.

Both of the foundations were manufactured in Italy. While I could not find any evidence to show that they were produced in the same factory, it seems likely that these two foundations at least share sources of ingredients. Both of these foundations have been known to oxidise to a slightly darker shade than what you would see when it’s freshly dispensed from the bottle.

This makes it all the more necessary that you should leave your foundation swatch on your face for at least half an hour or so before you decide which shade suits you the best.

But there are some differences

The formula may be strikingly similar, but there are still some differences that might influence your decision one way or the other. Before you head straight out to get your Catrice foundation, read this point first. Much of the hype around the Fenty Beauty Pro Filt’r Soft Matte Longwear Foundation revolves around the range having 40 different shades, in a variety of warm, neutral, and cool tones in order to fulfill the brand’s vision of being a truly inclusive cosmetic line. Catrice HD Liquid Coverage Foundation, however, only comes in four shades, and there isn’t a whole lot of difference between them. The shade range also notably lacks fairer and darker shades, and you don’t have a lot to choose from when it comes to undertones.

You’re really stuck in a box here, and it’s quite likely that you would have to mix two of these together to get a shade that works for you. 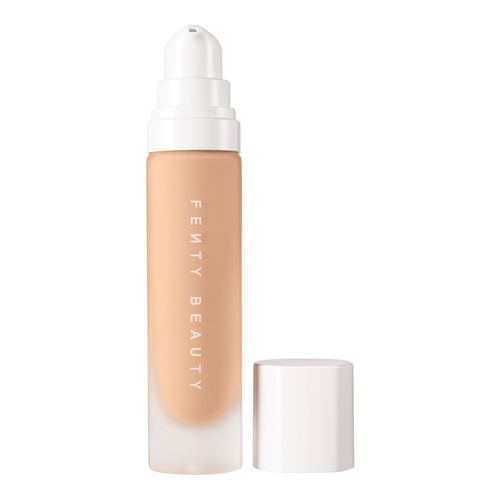 The Fenty Beauty Pro Filt’r Soft Matte Longwear Foundation comes in a very sleek pump bottle which I personally really love, as it’s easy to dispense just the right amount of foundation and with minimal mess. The Catrice HD Liquid Coverage Foundation comes in a bottle with a dropper, so it might be slightly messier and harder to work with.

While the Catrice HD Liquid Coverage Foundation has actually been around since the second half of 2016 – you’ve probably not heard about it until now. Catrice is also quite new to Singapore, having only entered Guardian within the last few years or so.

Fenty Beauty literally took the beauty world by storm when they launched in Sephora here a couple of months ago. And this is not surprising considering that it is the brainchild of Rihanna, who is one of the most influential pop stars of our time.

Everyone was clamouring for Fenty stuff, and the foundation was one of the most coveted items in the brand’s lineup.

If you won’t rest until you can see for yourself what the whole hype is about, then you should probably start camping for your Fenty shade. 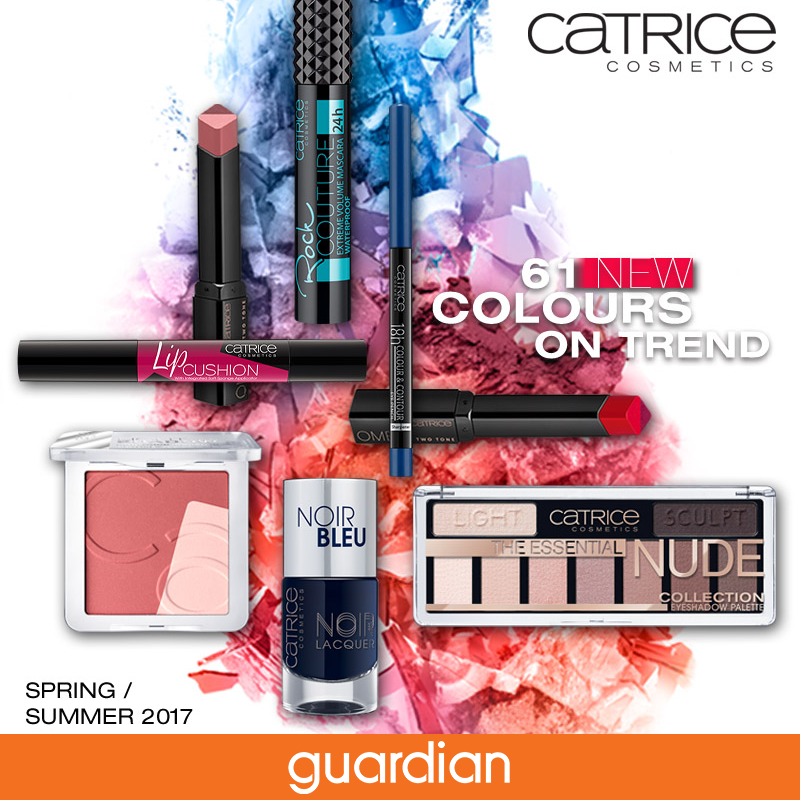 The Catrice HD Liquid Coverage Foundation can be found at Catrice counters in Guardian stores. That means you probably could get this foundation at your nearest mall, and at least you’d have a lot of alternative stores to explore if you aren’t able to find your exact shade there.

Because there’s a lot less space allocated to them, Catrice HD Liquid Coverage Foundation may go out of stock in individual stores quite quickly, although we are willing to bet that it’ll still be faster to wait for their restock than to wait for Fenty Beauty’s. Fenty Beauty is available at all Sephora stores, and on Sephora online. However, on the website, 16 of the 40 shades are out of stock, most of which fall within the 100 – 300 shade ranges (100 is their lightest, 490 is their darkest).

In Sephora physical stores, meanwhile, the stock situation is just as bad, if not worse. Some stores have reported that they are out of stock for every shade “from 100 to 250”.

There is also no clear estimate on when new stocks would arrive as well, as it seems that the Fenty Beauty headquarters are still trying to catch up with all this demand.

I tried it out for myself

As I’ve earlier mentioned, I wasn’t able to get my hands on my correct Fenty Beauty foundation shade after the Sephora sale, but by a stroke of luck, I found someone who was selling my shade on Carousell.

I bought the Fenty Beauty Pro Filt’r Soft Matte Longwear Foundation in shade 160 (warm peach), and the Catrice HD Liquid Coverage Foundation in shade 010 (light beige). I did not blot my face for the entire day nor do any touch-ups with either foundation. 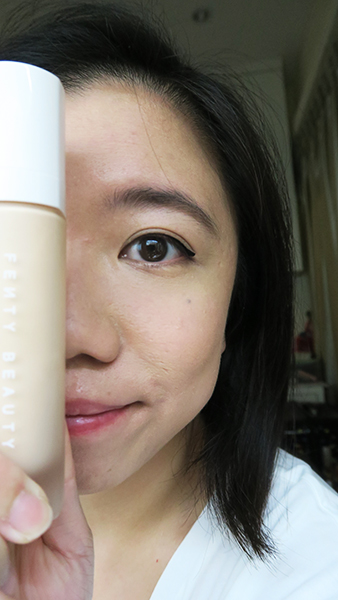 On the day that I meant to test them both out, I used all the usual steps of my skincare and makeup routine (except for the foundation, of course). I applied each foundation on exactly half of my face, splitting down the middle of my nose, and I used a damp sponge for both.

If you can’t tell the difference, neither could I. When it comes to application, though, I felt that Catrice felt a tiny bit less dry than Fenty did. Both of them, of course, dried down matte. The Catrice had a more watery texture than the Fenty Beauty foundation too.

I found that Fenty looked best after an hour or two, when you’ve started secreting some sebum that mixes in with the foundation, while Catrice looked pretty good off the bat. I did not go out for lunch that day (we ordered in to the office), so I didn’t get a chance to walk around in some good ol’ heat and humidity to really torture each foundation. That’ll be coming up nearer the end of the day, however.

Both foundations still looked pretty good by the time I was done with lunch – or at least, it looked good from afar. My colleagues mentioned that my Catrice side looked slightly shinier at this point, although it was more of a healthy glow-type of shine, rather than looking like a greaseball.

Both of them wore off somewhat around the outer corners of my eyes, which is a notoriously difficult place for any makeup to stay put as I have very watery eyes. Catrice seemed to hang in there a bit better, though. If you look at the zoomed-in photos, you can probably see some cakiness happening on the Fenty side around my laugh lines and near the inner corners of my eyebrows (ignore all the stray hairs).

Aside from the cakiness around the laugh-lines, Fenty also seemed to be going funky around the corners of my nose. It was quite imperceptible though – I didn’t notice it for the whole day.

Here, I need to emphasise that I had not only put on a hydrating serum and moisturiser as my skincare before I began my makeup, I also used the First Aid Beauty Hello FAB Coconut Skin Smoothie Priming Moisturizer, so I don’t think my skin was dry at all that day. 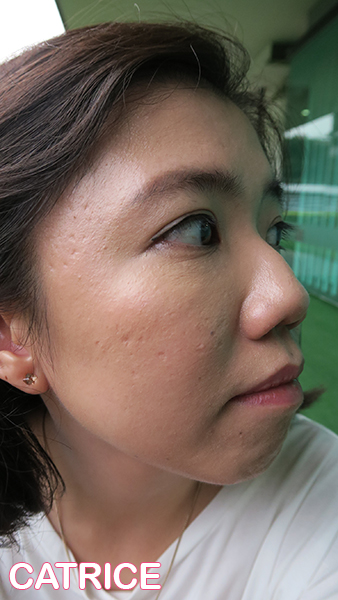 I had to leave the office at about 4PM to head over to an event. After that was done, I made my way to another event, and this photo was taken just as I was waiting for my second event to start.

(I’m beginning to look a little weary by this point, but don’t we all at the end of a work day?)

The foundation situation is still pretty much the same as before. Both have rubbed off at the outer corners of my eyes, and below my mouth. Fenty still remains cakey at the corners of my nose and around my laugh lines.

However, both these foundations have done a pretty good job with oil control so far. My eye makeup has disappeared by this time, because I had to put on an eyeshadow look during my second event, which I later cleaned off after I got home. I applied concealer around the area to patch things up, so if you do see any funkiness around the eye area, it’s probably not wholly the foundation’s problem.

I’ve already mentioned that the Fenty Beauty foundation had some mild cakiness around my face, but luckily it did not worsen throughout the day. Again, it was not noticeable in real life – I didn’t even notice it when I looked in the mirror.

I had travelled to two events by the end of the day, made a somewhat long bus journey home, and jogged up a slope back to my house before these pictures were taken.

All things considered, I think both foundations have worn very nicely even after the stress tests in the second half of my day. My face still looked relatively fresh, even though I had not blotted at all.

To be very honest, I found myself reaching for the Catrice HD Liquid Coverage Foundation more often in the following days, even though I had gone to far more trouble getting my hands on the Fenty Beauty foundation.

How do you choose?

You should absolutely try out the Catrice HD Liquid Coverage Foundation.

The Fenty Beauty Pro Filt’r Soft Matte Longwear Foundation would be an excellent choice for you too.

Catrice also applies well with fingers and brushes, while I found that only damp makeup sponges work for Fenty Beauty (perhaps it has to do with my technique as well).

As both of these foundations are very mattifying and drying, I wouldn’t recommend them for those with drier skin, unless you really go ham on moisturising your face before.

However, when I’ve worn Fenty Beauty by itself on other days, I found that I tended to look somewhat oily by the 12-hour mark if I didn’t blot. I haven’t managed to try this with Catrice yet.

Both of these foundations have become my go-to choices now, so whichever one you choose, you’d still be getting an excellent result.