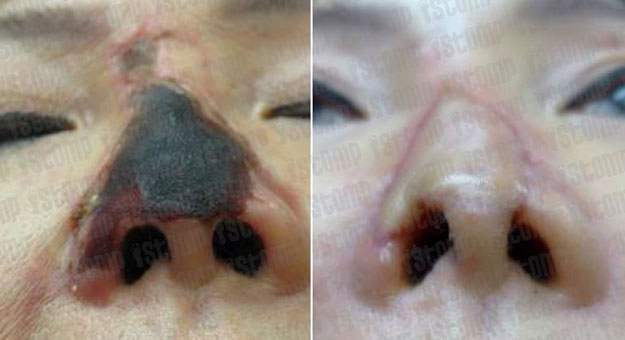 Claudia (not her real name) is a very familiar with aesthetics procedures having gone to many doctors for regular treatments. When her business failed, she could no longer afford to go to a doctor, and that was when she decided to go to a beautician for her regular aesthetics treatment. That was a decision she regrets till today. Even till this day, Claudia is still undergoing treatment even as she spent the past year rebuilding her nose. It all started when a friend told her of someone who could do filler injections.

“I followed my friend to her shop just to have a look,” said Claudia. Initially, she did not plan to have anything done. But the beautician told her that her nose bridge needed to be enhanced and that she could pay for the treatment in installments. The first injection, using a filler called Natural Face, disappeared after a week. The second injection, using the same product, was done with a “very long” needle, she said.

“When she pushed the needle in, it was quite painful and I told her to stop,” said Claudia, even mentioning that no anaesthesia was given.

But by then, the beautician had finished the injection. That was around 5pm on Sunday. Three hours later, at around 8pm, she felt the skin on her forehead pulling upwards. It was slightly painful and her face was also red.

The next day, Claudia went to a general practitioner and was given some antibiotics and an antiseptic wash for her nose.

By Tuesday, she knew it was a big problem. “The colour was not just on the skin, like a normal bruise, but also deep below it,” she said.

The skin of her nose had turned gangrenous.

Claudia then brought the filler packaging to a plastic surgeon, who ascertained that the filler was a counterfeit product which looked authentic.

“It was probably the combination of the use of a counterfeit product and the beautician’s lack of skill that caused the vessels providing blood to the skin of the nose to become clogged,” says Dr Kuek, who also said that Claudia’s skin and soft tissue had died, leaving her with only the deep cartilage structure.

If you have any friends who are considering doing fillers, do share with them this article!