Who knew a Spongebob makeup collection could be so cute?! Here’s everything you need to know about it 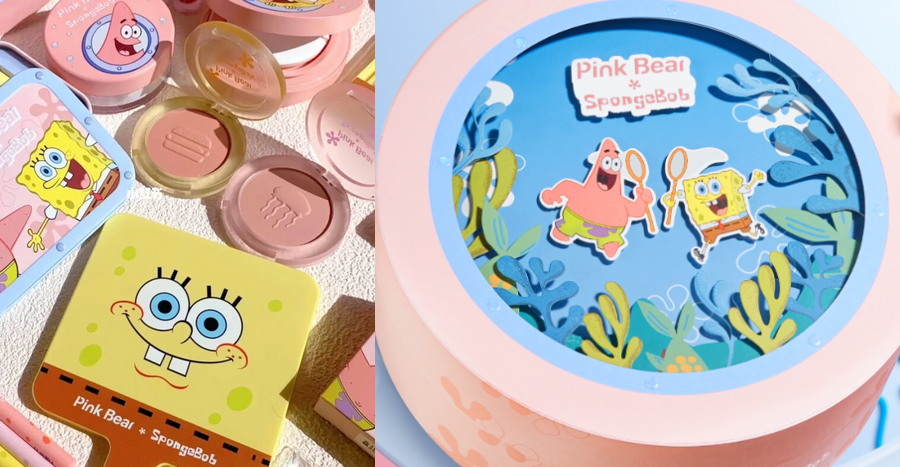 Pink Bear is the sister brand of C-beauty name Perfect Diary. It is known for its sweet, girly makeup lines which are not only affordable but also popular with students.

The brand has collaborated with Viacom to launch a Spongebob Squarepants makeup collection, which we’re dying to get our hands on. This line is perfect for fans who love the adorable sea sponge and his best friend Patrick Star.

Keep reading to see everything they have in this collection. There are two new four-colour eyeshadow palettes in both Spongebob Squarepants and Patrick Star designs.

The Spongebob Squarepants palette has warm red and golds while the Patrick Star palette features neutral pink and brown tones. Most of the shades are matte, save for one glittery shade, great for experimenting with. Pink Bear also launched a couple of new monochrome blushes with slight shimmers. They come in shades of milk tea and creamy apricot, both which could be used for a natural, girly look.

Plus, the blushes have raised prints of a krabby patty on the Spongebob one and a jellyfish on the Patrick one, making you go ‘aww’ as you apply your blusher. 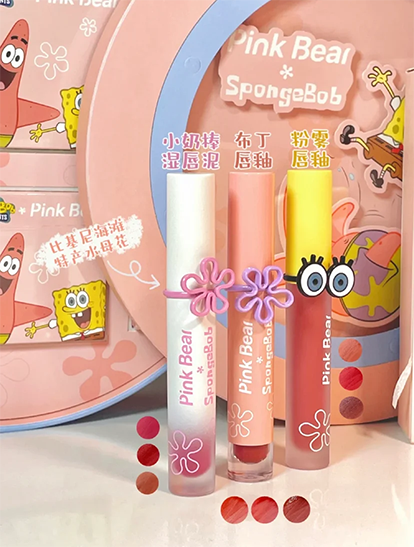 Of course they also had to release lip products to complement the line, and this collaboration not only has three different lippies, but they also come in nine different gorgeous shades.

The gradient white design of these matte lip muds remind us of the skies of the Spongebob Squarepants universe. These adorable lippies come in darker shades of pink, brown, and red.

You could try the creamy rose M621 shade for more subtle, sophisticated look.

Patrick Star is the star of this pale pink lippie design. This glossy mirror lip glaze comes in shades of reddish brown, orange red, and a cooler toned red, so there’s something for everyone.

We recommend the middle shade, black tea latte L333, for an innocent yet daring appearance.

The final design is the Spongebob Squarepants design. Featuring his bright blue eyes, you might giggle at the silliness as you apply your lip glaze for the day. This matte mist lip glaze comes in shades of dark brown, dark red, and nude brown.

Perhaps you could try the bitter black brown G614 shade, which reminds us of a dark mocha latte. 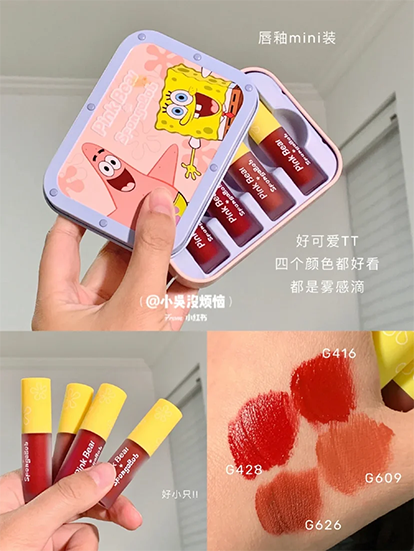 This could be the perfect gift for those who can’t commit to just one single colour.

Coming in a pack of four, these mini lip glazes are kept in a tin box with Patrick and Spongebob together on the front, signifying their friendship. These lip glazes come in both bright red shades and darker neutral tones, allowing you to mix it up throughout the day. Aren’t these beauty tools so cute? We can’t get enough of these Spongebob and Patrick beauty blenders and sponge applicators. These are great for applying your day-to-day foundation as they’re suitable for both dry and wet applications.

Our favourite is the Spongebob-shaped beauty blender because it looks so much like our favourite sea sponge.

Regrettably, we can’t seem to find the Patrick beauty blender as it may have been sold out or not released yet. 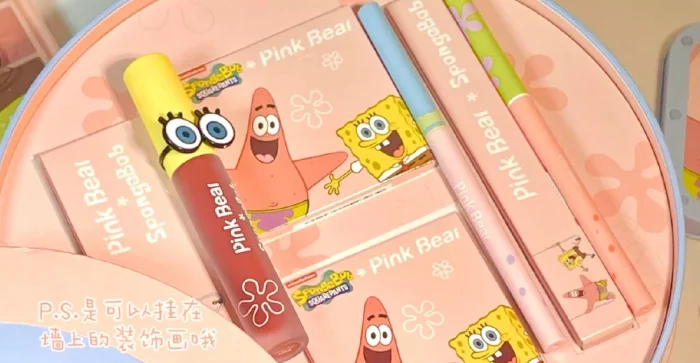 This co-branded gift box would be a great gift for those who don’t have makeup but are eager to try their hand at it. It includes a Patrick four-colour eyeshadow palette, a Patrick blusher, Spongebob lip glaze in shade G428, and eyeliner.

Those new to make up can easily play around with these adorable items as they experiment with new looks. We already have a few friends in mind we might give this to! 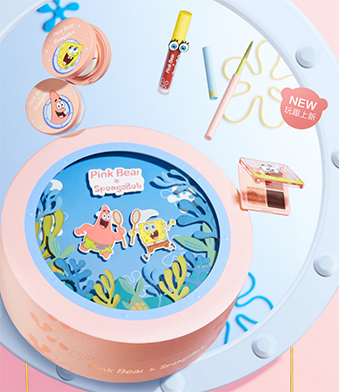 Do you know someone who is a big Spongebob fan and loves makeup? This surprise gift box might be the perfect gift for them as it includes:

You’ll also get a random Omamori, a Japanese amulet said to provide luck or protection, either in the design of Spongebob or Patrick.

Good thing you don’t live in a pineapple under the sea because they most likely don’t ship there. Be quick and grab this set before it drifts away!