You thought that makeup collections were crazy? You haven’t seen anything yet.

Malaysian beauty brand Elianto is now creating waves after it announced that it would be launched the world’s first durian-flavoured makeup collection. Are you ready for this? We sure weren’t. If we were closer to April, we might have suspected that this was just an April Fools’ joke – but it’s real, guys. Elianto’s new makeup collection doesn’t take its inspiration from any old durian, but from the King of Kings itself – the widely-coveted Musang King (or Mao Shan Wang). A portion of the collection is already available on the official Elianto website, which unfortunately does not ship to Singapore.

The packaging of the products is, of course, in a bright durian-yellow with the King of Fruits peeking up from below. The colours and shades available also take its cue from the spiky tropical fruit. Colour theme and packaging are all well and good, but you might be wondering: will the products in this collection smell like durian?

Or at least some of them, according to a report by Straits Times. The Elianto Durian Musang King Lip Care SPF18, which are the two bullet-type lipsticks in the bottom row of the screenshot above, comes “infused with durian scent”. 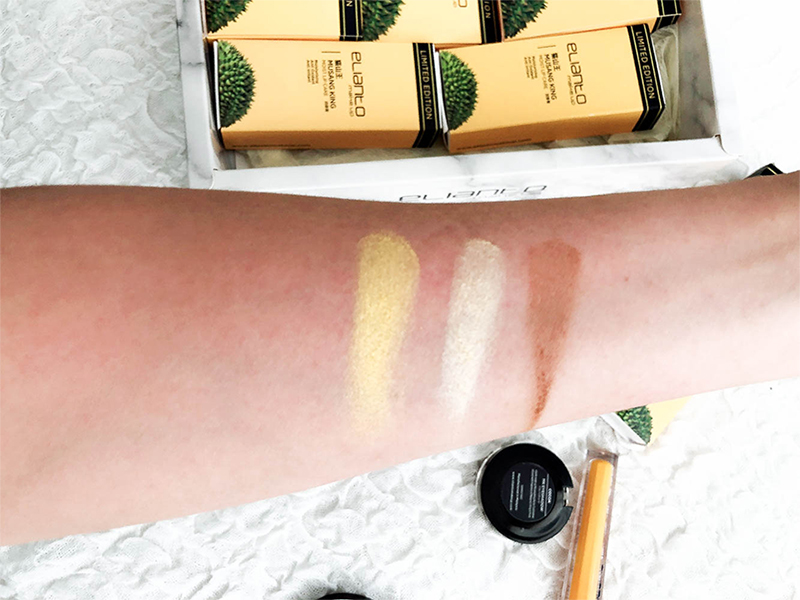 There is no word on whether the rest of its collection carries the same iconic aroma of the durian yet, but we’re on the fence about how wearable a durian-scented lipstick would be, no matter how much we love durians! The Elianto Durio Bloom EDP is described on its official Lazada page as a “durian flavour fragrance”, with top notes of freesia, bergamot, and grapefruit, a core of jasmine, muguet, orange, and rose, while it fades to a cocktail of musk, amber, and sandalwood.

It doesn’t sound as bad as you might have initially expected.. In fact, in response to a question on the Lazada page, Elianto Makeup has stated that the perfume is inspired by durian flowers, not the durian fruit itself. As of right now, Elianto Makeup isn’t available in Singapore, nor can we find it on shopping platforms which ship to Singapore. If you want to declare your love for the King of Fruits, you’ll need to use Airfrov, or get simply get someone living in or travelling to Malaysia to pick it up for you!

Elianto is a “masstige” line of cosmetics (a combination between mass affordability with prestige), aiming to provide premium products for an affordable price. They’ve told Marketing Interactive that they are planning for a nasi lemak-flavoured collection in the future.