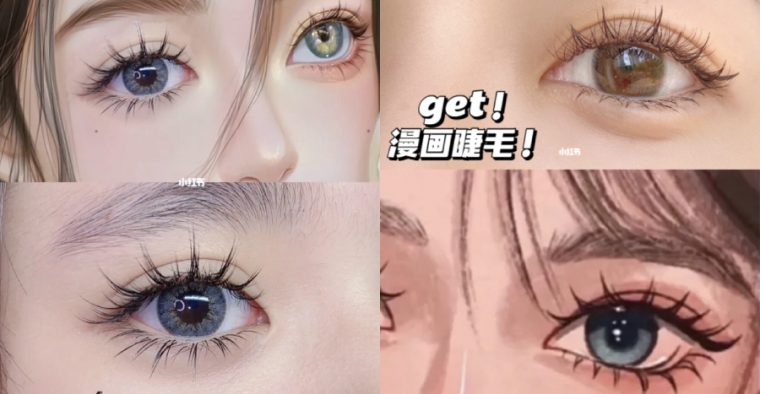 The past year has witnessed many trending lash styles, from naturally lifted lashes and spidery Korean lashes to ultra-feathery, wispy lashes. But this latest lash style is unlike the ones we’ve already seen.

Manga lashes, also referred to as webtoon lashes, are trending hard, and given how much they widen the eyes and give the cutest doll-like look, it’s no surprise that so many are gushing over them.

Plus, with the anime and manga craze that has taken over these past two years, it only follows that Japanese comic makeup looks are making their debut, even for those new to or unfamiliar with the genre.

What are manga lashes? 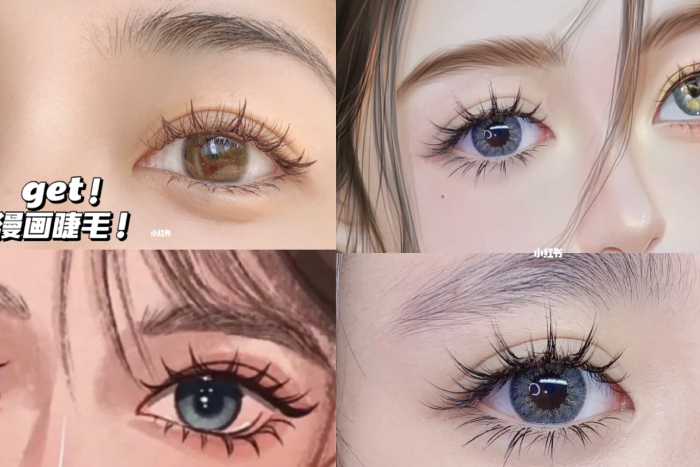 Unlike most other lash styles that extend the natural lashes uniformly, manga lashes have clear lash “peaks” – individual lash strands are longer and more prominent than the others.

This webtoon lash style also emphasises the lower lashes in a similar way, with individual lash segments lengthening the bottom strands. The effect is a lovely, exaggerated doll-eye look that is similar to the lashes that female manga characters have.

How to wear manga lashes So, if manga aficionados are expressing their love for Japanese comics with cosplay, then why not, for a more everyday-wearable style, embody your favourite characters with a manga lash style? Even if you’re not into manga, it’s hard not to want to don these lashes for an adorable, bright-eyed look.

How? Take your cue from TikTokers and beauty influencers like @sichenmakeupholic, who are using individual lashes and cluster lashes to create their manga lash style.

These refer to small pieces of false lashes that are to be attached to your natural lashes similar to how you would with strip lashes – only, many are used to fill up across the lash line.

1. Lift your lashes with an eyelash curler Curling your lashes helps to widen your eyes, as it removes the shadows that straight or downward-facing lashes might cast onto your eyes. So, even though you don’t need to apply mascara in the later steps, it’s good to start off by curling your lashes using a good eyelash curler.

@sichenmakeupholic recommends the Shiseido Eyelash Curler which has very slim metal “jaws”, allowing you to curl your lashes close to the root.

2. Squeeze eyelash glue onto the back of your hand

Before applying the individual lashes, prepare the eyelash glue that you’ll later use on the false lashes.

You can squeeze the lash glue anywhere, like on the plastic packaging of the individual lashes, but @sichenmakeupholic recommends putting it on the back of your hand.

The heat from your hand, she said, will help the glue to become tacky faster. This makes it easier when you’re applying false lashes to your natural ones.

Ardell’s Duo Lash Glues are a popular choice for TikTokers and beauty YouTubers alike, one reason being that they dry fast.

Choose Ardell Duo’s Striplash Adhesive (rather than brush-on adhesives) in either Clear or Dark. Clear lash glues dry clear, as their name suggests, while dark lash glues are dark even after they dry. Dark lash glues can help to darken and emphasise the lash line, further accentuating your eyes, in addition to false lashes.

3. Apply individual lashes to your natural ones Instead of getting strip lashes, get a set of individual lashes to help you achieve a manga lash look. @sichenmakeupholic notes that everyone has a different eye shape, so you can try it out before adjusting the distance of the lash in a way that suits your eye. Make sure to move the lash before the glue has dried. Remember also to trim the last piece of the individual lash before you attach it to the innermost corner of your eye.

This is only a guide, so feel free to try out different distances between the individual lashes to find the look that you love most!

4. Fill in the gaps with lightweight cluster lashes To soften the look and add a feathery lash effect, the next step is to fill the gaps between the individual lashes with cluster lashes.

Cluster lashes are several strands of false eyelashes joined together in one band; they should be lightweight and wispy to look more like your natural lashes. They should also be shorter than the individual lashes so that the individual “spidery” lashes can help to emphasise a manga lash style. Apply the cluster lashes to the gaps between your first set of individual lashes. To lift the eyes further, you can choose to fill in only the gaps in the outer parts of the eye.

One key element of the manga lash style is long and spaced-out bottom lashes, so you definitely don’t want to neglect your bottom lashes!

Apply the individual lashes to your lower lashes. Like how you applied the first set of false lashes, also start by putting lash glue onto the first individual lash, then attaching it to the outermost corner of the eye. Leave a distance of about 0.5cm between each lash, and stop at about the centre of the iris.

Once you’ve completed this step, you’re done with creating your manga lash style!

7. Complete the look with eyeliner

You can also accentuate your eyes with eyeliner that can be applied before you start attaching the false lashes. Or, you can also use waterproof gel liner to fill in the waterline, as well as blend your natural lashes with your false ones. @sichenmakeupholic recommends the Colourpop Swerve Crème Gel Colour (S$12.22), which she applies to her waterline using a brush. Otherwise, you can use gel liners from other brands, like the Maybelline Lasting Drama Gel Eyeliner (S$14.28), which is deep black and long-lasting. The eyeliner also comes with an angled brush that you can use to fill in your waterline with. The KVD Beauty Super Brow Extreme Long-Wear Pomade (S$34) is a brow pomade that triples as an eyeliner and eyeshadow. It can be used as an eyeshadow base or, for darker shades, to create a smokey eye makeup. It can also be used as a creamy, long-wearing eyeliner.

Individual lashes to use for a manga lash style

It doesn’t matter what brand you use for your individual and cluster lashes, as long as they look similar to the ones that we showed above. You can consider going for these false lashes that we’ve rounded up for you, for a breathtaking manga lash style. You can choose between ‘fishtail’ individual lashes or lightweight clusters, both of which the brand offers. Also, select the length that you desire. The lashes are available in 0.8cm, 1cm, and 1.2cm.

Get Lashie Individual False Eyelash for S$4.58 on Yesstyle. One set of Mogugu False Eyelashes contains both ‘fishtail’ individual lashes and feathery clusters, with different lengths of each style available as well. The lashes range from 9mm to 11mm in length.

Get Mogugu False Eyelashes for S$13.14 on Yesstyle. For eyelashes that are more “spidery” or clumped together, you can try Joomy’s false individual lashes that have an A-shaped design. The lash strands that stand out taller amongst the others will look thicker and more obvious – perfect, if a bolder manga lash style is what you’re going for.

Get Joomy False Eyelashes for S$8.04 on Yesstyle. Weldal False Eyelashes come in various designs, including one set that has “fairy hair” individual lashes and feathery cluster lashes.

Get Weldal False Eyelashes for S$14.06 on Yesstyle. 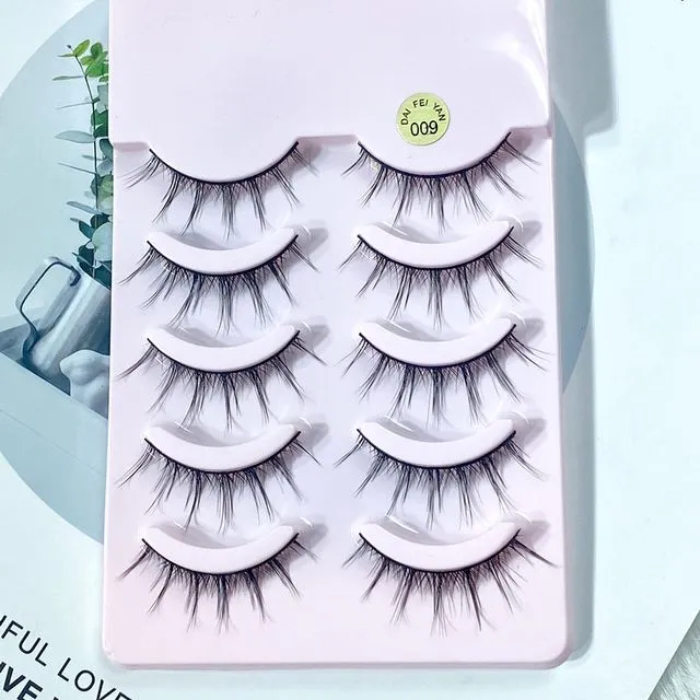 Another method that TikTokers are using to create a manga lash style is by manually clumping the strands on a strip lash, then cutting the strip lash up according to its clusters.

the jason derulo caught me off guard #mangalashes

We’ve seen TikTokers applying lash glue to the ends of the lashes, and then using a pair of tweezers to stick them together in sections. They will then cut the strip lash into smaller sections before applying them to their natural lashes.

Aimo’s strip lashes are already designed with longer and shorter strands, making it easier for you to don a similar manga lash style! Wear an extra extravagant, intense manga style lash look with DSLONG’s strip lashes. The strip lash has wider sections of longer lashes, so you can clump them together with lash glue for bolder, spidery lashes.

why are my hands so shaky lol. Lash inspo: @kamranmc 😊 lashes are from amazon I just searched spiky lashes lol

Get DSLONG Japanese-style Strip Lashes (set of five) for S$23.73 on Amazon.

Get manga lash extensions at these lash salons in Singapore

If it’s too much effort to put on false lashes each morning, there are lash salons in Singapore that you can visit to wear a semi-permanent manga lash style too! 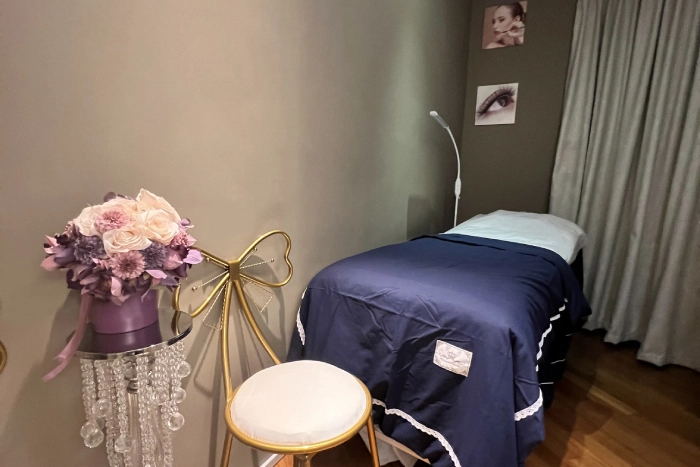 Serenity Beaute offers lash lifts and a myriad of extension styles that range from natural airy lashes to fantasy manga lashes. Each appointment begins with a consultation with the lash technician, who will then design your lashes to suit your natural eyelashes and eye shape. The manga lash design features clustered long lashes and shorter more feathery ones, as well as lengthened bottom eyelashes – you’ll get to roll out of bed ready, with the most gorgeous manga lashes! Perky Lash’s iconic pink storefront and interior make it easy for you to spot its three outlets around the island! Offering lash extension, lash lift, and eyebrow embroidery services, Perky Lash is known for its professional services that produce great lash results. The salon’s Manga Lash Extension emphasises several thicker clusters of lashes to give a characteristic webtoon lash look; the lashes are also extra lifted to naturally widen and brighten your eyes.

And, if you’re looking for a cosy place to get your lashes done, we recommend heading to the Bugis outlet, which has dimmed lights and comfortable space. It’s no wonder that the reviewers give it a five out of five star rating on Google!

Get Manga Lash Extension at Perky Lash for S$108 on Salon Finder.