A self-heating facial mask used during shower? We test it so you know if it works 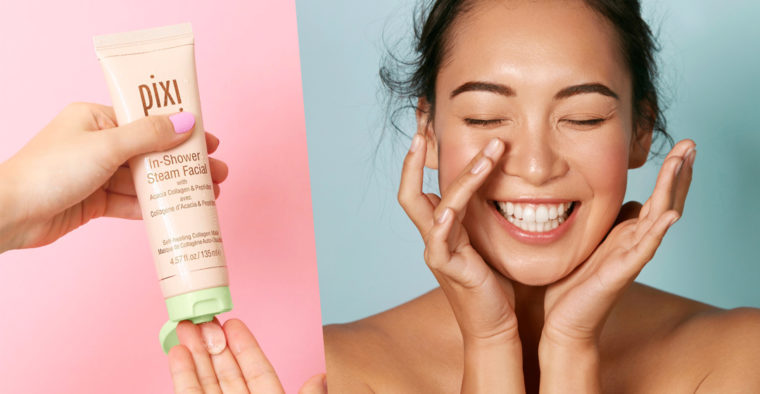 Pixi Beauty has added 14 new products to their very popular Skintreats series, including their first-ever Boost Sheet Masks, a pH-balancing gel, and a solid, multi-use moisturiser that can be used on face, lips, body, and hair.

All the innovative products sound extremely exciting but the one that intrigued us the most: the In-Shower Steam Facial.

Pixi In Shower Steam Facial: What is it?

This is a self-heating cleansing mask that is to be left on while you’re in a shower or bath. Its self-heating action is designed to open pores so as to improve the effects of this mask. It contains acacia collagen and peptides to retain moisture, provide a plumping effect, nourish skin, deeply cleanse it, and detoxify it.

Pixi In Shower Steam Facial: How to use it?

Squeeze out an appropriate amount and slather it all over face. Leave it on while you take your shower or bath, and then rinse off.

Pixi In Shower Facial Steam review: Does it work?

Last year, we saw the launch of a few hair masks that are to be used while you’re in the shower to make use of the steam that is produced during shower to increase efficacy of the product. But still, I didn’t see an in-shower mask coming.

I typically use a mask after my shower, so the idea of using it while showering is very new to me.

But I know I had to give this product a try because after we’ve shared about the launch of the Pixi In Shower Steam Facial on our Instagram, we received numerous curious queries from our readers, asking for reviews. (And here it is!)

My first impression of the product wasn’t the best one. I found the texture of the gel extremely thick and sticky. Because of its heavy texture, I had to apply more product than expected to cover my entire face and neck.

And then the magic happened: the product warmed up almost immediately after it touched my skin. The warm sensation felt very comforting and it sustained even as I continued to massage it all over my face.

I left it on my face while I started to shower. But I realised that I had to skip washing my hair or wash my hair later if I wanted to keep the mask on. It was a slight inconvenience but I guess if you don’t wash your hair every day, you can schedule masking on no-wash days.

After my shower, I rinsed off the mask and was surprised that the sticky gel had transformed to a nourishing oil that could be washed off effortlessly.

I dried off and touched my face: it felt hydrated, smooth, soft, and plump. I looked into the mirror and noticed more clarity and radiance – something that I really welcomed especially after a tiring day.

So should you get it? I’d say the in-shower feature is a bit of a gimmick because using it during shower doesn’t really save much time nor effort for me. However, if you disregard the in-shower feature, it’s actually still overall a good mask to use. The self-heating effect – even if it doesn’t open pores as promised – provides a pampering sensation that I enjoyed. Most importantly, there’s a noticeable difference to my skin after using it and I see it as a good treat for my skin after a tiring day.

Pixi In-Shower Steam Facial retails at SGD35 and is available at Sephora.