Celebrities are always envied for their stunning looks and fantastic bodies, and so it is no wonder that many fans will look up to them for tips on how to achieve the same body through diet or fitness health tips. It is also no surprise that dieting isn’t pleasant, as you often have to give up all your favourite foods in order to lose the weight.

We can hardly blame you for dreading dieting, so here are 11 foods that celebrities eat that are not only delicious, but will help you stay in shape. Actor Matt Damon is known for his roles in movies such as The Martian, and is a very established actor. He is also a genius with an IQ level of 100, and actually dropped out of Harvard to eventually become the most bankable actor in Hollywood.

Acting brings with it many difficulties, including needing to be of a certain weight or body type for a role, and Damon is no stranger to needing to lose or gain weight quickly for the role. In order to diet, the Jason Bourne actor tried a strict diet with no help from a personal chef or nutritionist.

One of the dishes that he tried to help keep in shape and lose weight was the Saffron Risotto with Steamed Asparagus. The dish is filling, healthy, and certainly delicious, and isn’t so difficult to make. All you have to do is heat some vegetable or chicken stock to a slow boil while blanching some asparagus in another pot.

Stir fry some onions, arborio rice, white wine, and saffron until the wine is absorbed before adding the stock one ladle at a time until the stock has been fully absorbed and the risotto is creamy and fully cooked. To plate, top the risotto with steamed asparagus and sprinkle on some chopped parsley and parmesan cheese. Rita Ora has a rather odd diet, in that she enjoys having the same breakfast everyday. Each morning, the singer tends to have egg whites with salmon, or she might switch it up when the mood strikes and try boiled egg with salmon instead.

Although this breakfast sounds rather plain, it is rich in protein and healthy fats, and so is perfect for losing weight or maintaining your physique. The rest of her diet includes foods such as chicken and vegetables, and she also drinks a lot of juices and plain water. She tends to shy away from bread, and tries to cook her meals for healthier alternatives. 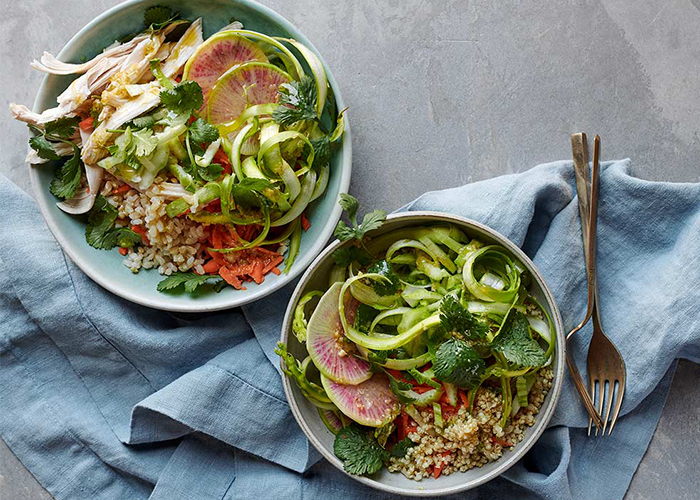 The founder of Goop and lifestyle guru is well known for the clean and healthy lifestyle she leads. She has published five cookbooks, and they focus on clean recipes as well.

Her Crunchy Spring Veggie Grain Bowl is from her cookbook “The Clean Plate”, and is packed with many different types of vegetables, and also includes chicken for some extra protein and brown rice or quinoa. This veggie bowl is also very simple and quick to make.

Simply start by dividing some quinoa between two bowls and top each with some shaved asparagus, carrot, radish, chicken, and bok choy. Garnish these with cilantro and pour over a miso dressing, before drizzling with coconut aminos and some sesame oil.

Check out other “The Clean Plate” recipes here , or click here for the full recipe. 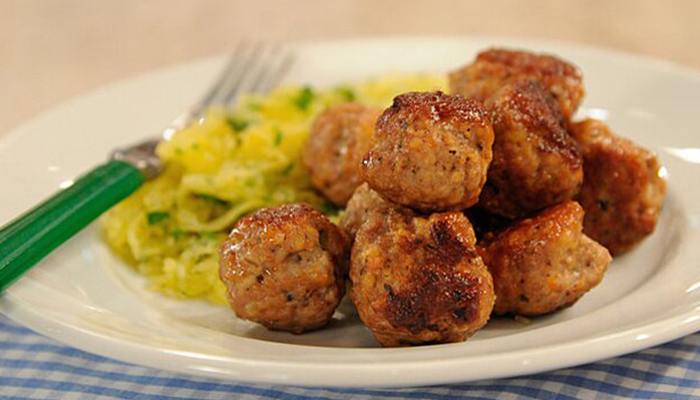 Jessica Alba actually came up with making turkey meatballs in a bid to get her toddlers more involved in the meal preparations (so as to pique their interest in food). The result is meatballs made with turkey meat – a healthy, white meat that is often used in diets as it is high in protein and low in fat.

Meatballs by themselves are also pretty simple to make. Start by mixing together the ground turkey, panko (Japanese breadcrumbs), carrots, zucchini, onions, eggs, Italian seasoning, and salt in one bowl until well combined. Form the mixture into 1-inch balls and cook the meatballs in a pan with oil for about seven minutes until they are evenly browned.

Add half a cup of chicken broth, cover the pan for another seven minutes on low heat until the broth has been absorbed, before adding another quarter cup of chicken broth and cook it uncovered until the broth has been absorbed once again. You can serve it as a side or main dish for the meal, and enjoy some delicious, homemade turkey meatballs. You can also refrigerate them and have them over the course of a few days. 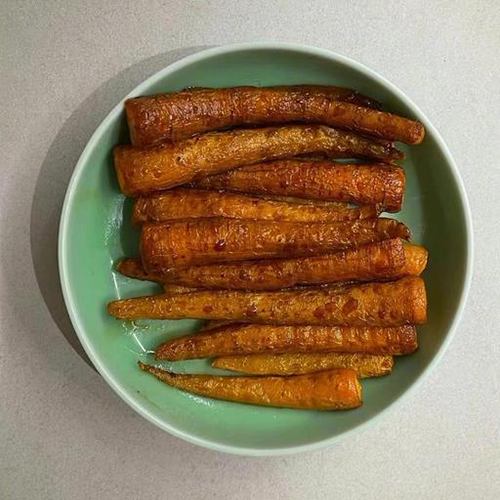 If you are looking for a healthy but still satisfying snack alternative, you can try this recipe by actress Sun Li of Legend of Zhen Huan fame. Fragrant and delicious, this dish is low in calories as it is made using carrots, but if you dislike carrots, you can try the recipe with cucumbers or bamboo shoots instead.

Simply cut about two to three carrots into strips before applying a layer of olive oil and teriyaki sauce, sprinkle with pepper and some finely chopped basil leaves before baking them in the oven for 20 minutes at 180 degrees Celsius. A quick and easy recipe for some savoury and healthy snacks. 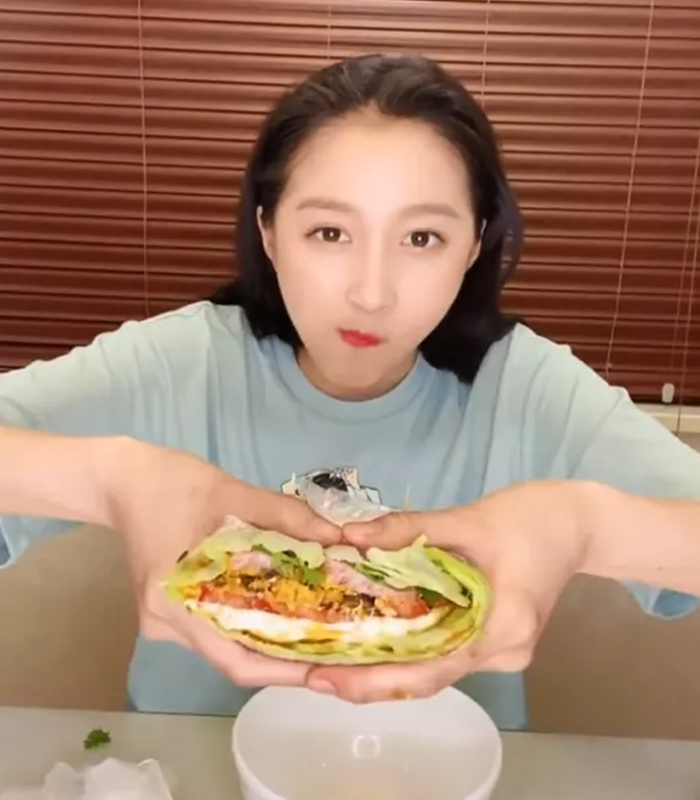 A vegetable sandwich might sound rather odd, but it is actually similar to the Korean-style of eating meat wrapped in leaves of lettuce or other vegetables. This is a very effective way of reducing  refined starch intake and controlling your body weight and is what Chinese actress Guan Xiaotong swears by.

This recipe is a simple one as well. Begin by frying up some thin meat slices of your choice and eggs, and slice up some tomatoes and cucumbers to complete the sandwich. Lay a layer of plastic wrap and your lettuce above it, before putting down your ingredients in an order of your preference. Wrap it all up, slice it in half, and your sandwich is good to go! 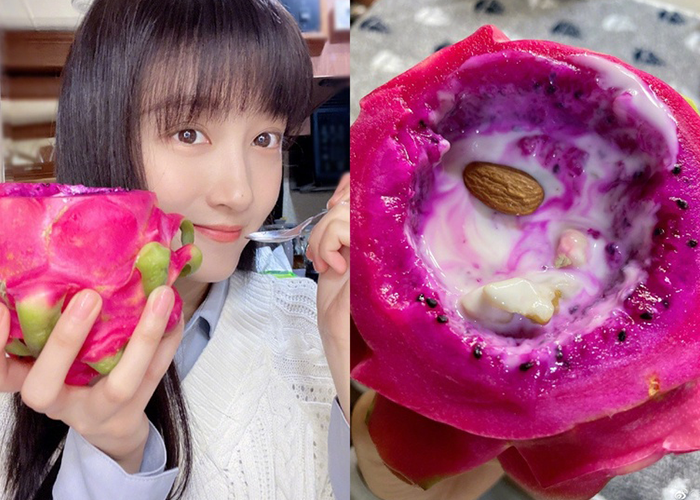 Another recipe from the Chinese actress, her Dragon Fruit Yoghurt is perfect for any hot weather as it is both refreshing and healthy.

Get yourself a dragon fruit (purple or white), and cut off the top so that you have access to the fruit. Scrap some of the fruit out with a spoon, and once you’ve eaten or removed about half of it,  you can pour in some sugar-free yoghurt and mix it with the rest of the fruit, along with some almonds for a cold and delicious treat. 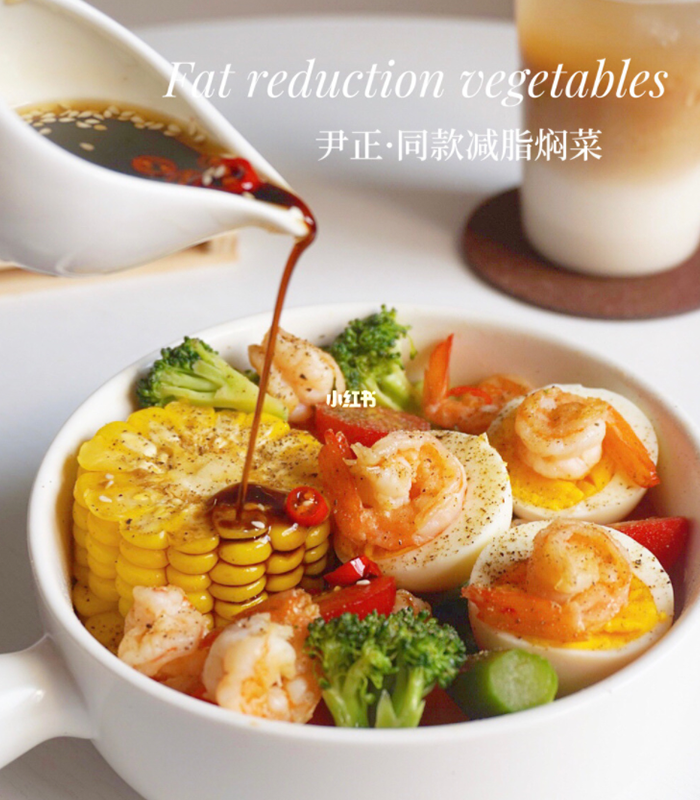 Having undergone a drastic weight-loss transformation, Chinese actor Yin Zheng has shown the benefits of healthy eating by following a strict diet and exercise regime.

For this recipe, begin by boiling an egg and removing the yolk. Shred the mushrooms and carrots, before frying in a pan with olive oil for about one to two minutes. Add half of a small bowl of water, some salt and pepper to taste, cover it, and let it simmer. In a salad, the salad dressing and pickled meats such as ham or sausage are what contains the most calories. Chinese internet celebrity Zhou Yang Qing’s recipe replaces these ingredients with healthier alternatives.

Start by boiling the potatoes and eggs, before cutting them into cubes with carrots, green beans, and the ham or pickled meats. You can replace the ham and pickled meats with shredded chicken breast, raw salmon slices, or other white meat alternatives. Next, use homemade mayonnaise as your dressing instead and mix all of the ingredients together for your potato salad. 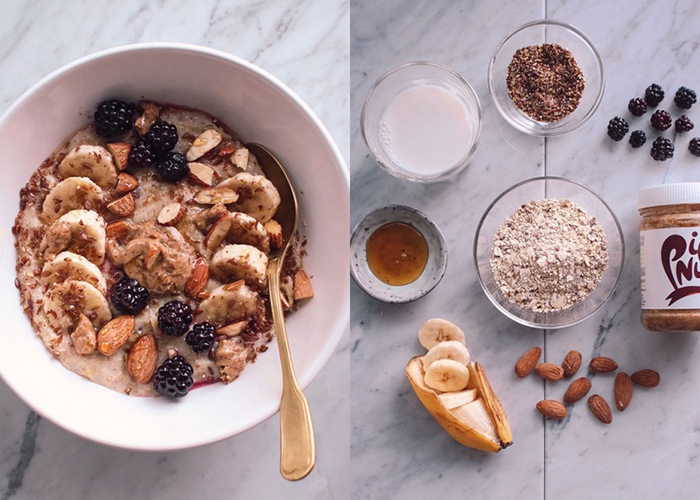 Oatmeal is a very common food among weight-loss diets as it is easy to make and filling enough that you can eat a smaller portion than you normally would. No wonder fitness model Pamela Reif swears by this. This recipe is also full of protein and is suitable for those looking to gain muscles and lose fat.

Blend some banana into a puree, before adding some protein powder, black coffee powder, and oats and boiling them on low heat with some water for about 10 minutes. When done, add some cinnamon, coconut chips, or any type of nuts and enjoy your delicious bowl of oatmeal. You can actually also change the ingredients to your preference and even refrigerate the oatmeal for the next day. 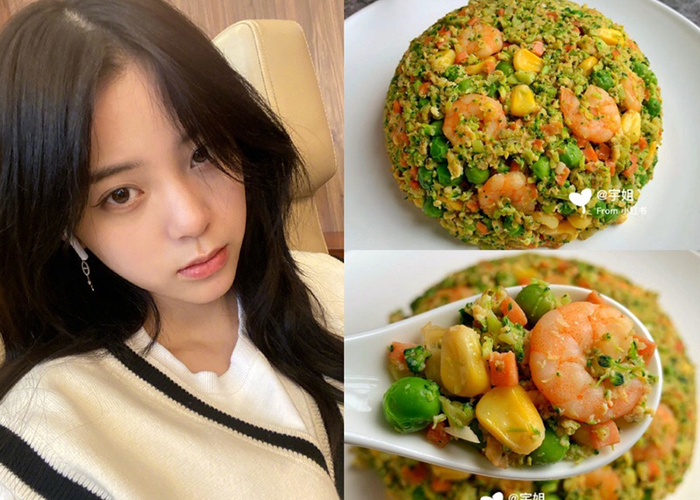 Taiwanese musician-actress replaces white rice with cauliflower as a simple way to reduce the number of calories while still having a tasty meal. Simply chop up your cauliflower (and broccoli, if you like) and mix it with eggs, before adding cooking wine, pepper, and oyster sauce to some shrimps to marinate for 20 minutes. Also, dice some carrots for later use.

Stir-fry the shrimp in oil in a pan, before adding the cauliflower, broccoli, and egg mix in to stir-fry. Add in your other ingredients and add a teaspoon of salt and oyster sauce for flavour, and there you have a plate of healthy fried ‘rice’.