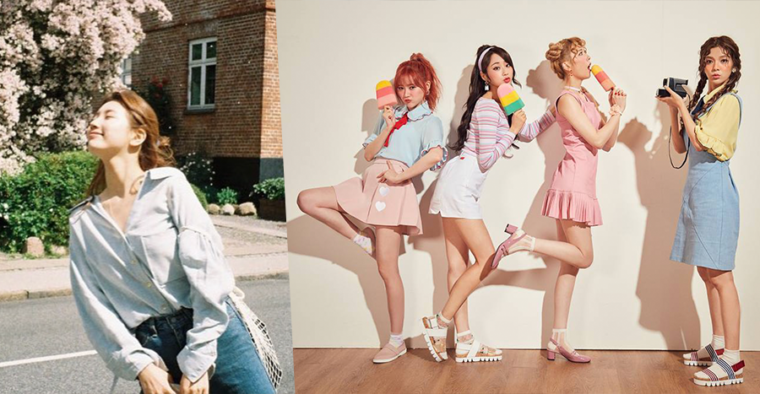 Korean celebrities seem to look effortlessly good all the time, but the truth is they sacrifice and work a lot to keep up their beautiful appearances. When it comes to weight loss, there’s no shortcut to it: moderate eating and exercise are always the way to go. But Korean actresses, singers, and influencers have shared their diet and exercising tips that may help us step up our routine and lose weight the healthy way.

Read on to learn workout and diet tips from Park Min Young, Suzy Bae, and other Korean celebrities.

In order to lose weight for her role in Healer, actress Park Min Young went on a diet for the first time. The diet plan involved consuming only apples and water for three days, so it’s definitely not recommended for most as it depletes your body of essential nutrients.

Apart from her restrictive diet, Park Min Young said that she mostly danced in order to lose weight. You can watch her perform with May J Lee in this video. We definitely agree that finding something you like to do is one of the best ways to stay consistent and keep the habit going!

Former girl group member Bae Suzy revealed she underwent an intense diet in order to lose weight for her role in the drama Uncontrollably Fond. She followed a diet meal plan called the “Time Limit” diet, making sure she didn’t eat anything after 6pm. For breakfast, she would only eat a slice of chicken breast and one sweet potato; for lunch, she ate brown rice and a salad.

Leading Korean actress Jeon Ji Hyun (you’ll remember her from My Love From Another Star and Legend Of the Blue Sea) believes that discipline is key when it comes to weight management. Jeon Ji Hyun doesn’t believe in skipping meals and is known for having a healthy appetite. She keeps healthy and fit by having a strict fitness routine despite her busy schedule. To do so, she wakes up every day at 6am without fail, to sneak in time for exercise. That’s hard work and discipline!

Actress Ha Ji Won from Secret Garden is often admired for her athletic build and toned body. The fitness junkie advises women to lift weights as part of their workout routine. She shares that many women shy away from weight lifting, but that it should be done together with cardio exercises in order to build strong and lean muscles.

Research says that an average woman’s daily calorie intake should be capped at 2,000 kcal, but if you want to lose one pound per week, 1,500 kcal is the cap, Hence, it is little wonder that the members of Girls’ Generation (also known as SNSD) plan their daily meals to be at 1,500 kcal. The meals consist of herbs, broccoli, brown rice, and chicken breast.

Korean actress Kim Sun Ah, best known for her performance in My Lovely Sam Soon, often has to gain and lose weight for different roles. However, extreme dieting and exercising are never her methods to weight control. To keep her body in tip-top shape, she shares that she eats small meals frequently throughout the day.

7. Moon Chae Won: A glass of water before food

Moon Chae Won, whose first claim to fame was for a supporting role in Painter of the Wind, reveals that her secret is to drink plenty of water. In fact, before she eats anything, she makes sure that she drinks a glass of water, and wait for it to “settle”. She says that this routine helps her to curb any impulsive eating, and reminds her to make healthy choices in the foods she consume. Another bonus of drinking more water? Moon Chae Won notes that she  observes more radiance in her skin since she started drinking up.

This fad diet is said to be used at the Royal Danish Hospital, which is why it’s called the “Denmark diet”. However, it seems like it’s more popular in Korea than it is in Denmark.

This is a strict high-protein diet that lasts for 14 days and involves a lot of steamed meat and boiled eggs. There shouldn’t be any salt or dressing in the foods and salads (except vinegar and lemon juice), and has to be done with exercise.

Nicole Jung, formerly from K-pop band KARA, is said to have lost 3kg after sticking to this diet.

The “paper cup diet” was made popular by K-pop group Nine Muses, and it follows this rule: Fill one paper cup with rice (choose either brown or mixed), another with fruits, and the third with a side dish of your choice (make sure it’s low in fat and salt content). The logic behind this diet is that it helps you keep your caloric intake in check, without compromising on the nutrition you should be consuming.

This diet has since caught on, and many other celebrities and fans have been following it.

K-pop band, SECRET, goes for a high-protein, low-carbohydrate diet. Besides having meals that consist mainly of fish, other seafood, tofu, and milk, they also reduce their intake of rice, swapping it with sweet potatoes. They also consume a lot of vegetables as their source of fibre.

That being said, these female idols’ diet plans are pretty stringent, and aren’t something that most people can keep up with. An example of their meal in a day looks something like this:

11. Kang So Ra: Continue to indulge in food, but in smaller servings

Just like most of us, Korean actress Kang So Ra admits that she is unable to stay away from foods that she loves. Instead of totally forgoing foods like fried chicken or pizza, she enjoys anything she wants. The catch? She only has them in small servings. The actress also does ballet, which is said to help her with muscle toning.

The banana diet started as a fad in Japan, which caused bananas to be out of stock at one point of time. The diet is said to help reduce the size of your face and help to burn belly fat. Korean singer Seo In-young swears by this diet and said that she lost 6kg in four weeks because of it.