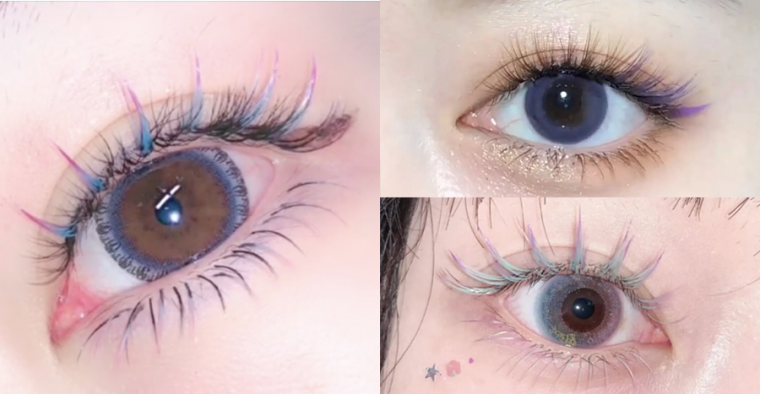 Dolling up your lashes is a great way to add a finishing touch to your makeup look. Whether you use false lashes, mascara, or go for eyelash services, lashes really do make all the difference.

When it comes to eyelash trends, we’ve seen feathery wispy lashes, naturally lifted spidery Korean lashes, and the latest manga lashes that give your look a dramatic flair.

Manga lashes were a massive hit on social media platforms like Xiao Hong Shu (a.k.a. China’s Instagram) and TikTok. Now, we’re here to introduce you to the next evolution of this style — coloured manga lashes.

What are coloured manga lashes?

To recap, manga lashes are known for their spikey, individual lash strands that stand out amongst shorter feathery lashes.

Other lash styles usually feature natural lashes that extend uniformly. However, manga lashes have individual clear lash strands that are longer and more prominent than others.

This style is also applied to the bottom lashes for an exaggerated doll-eye look that is similar to the lashes that manga characters have.

With this new trend, you can style coloured lashes the same way as manga lashes. Users on Xiao Hong Shu have been using coloured falsies as the “peaks” that manga lashes have.

So instead of using long black lash clusters, you’ll replace them with any coloured lashes of your choice.

How to wear coloured manga lashes

She uses lash clusters – these are small pieces of false lashes that are attached to your natural lashes similar to how you would attach strip lashes.

Use an eyelash curler to give a boost to your natural lashes. Even though the focus of this look will be on the falsies, you don’t want to have your natural lashes drooping underneath your falsies. Giving them a lift will help them complement the coloured manga lashes well.

Step 2: Attach the individual falsies to your lash line 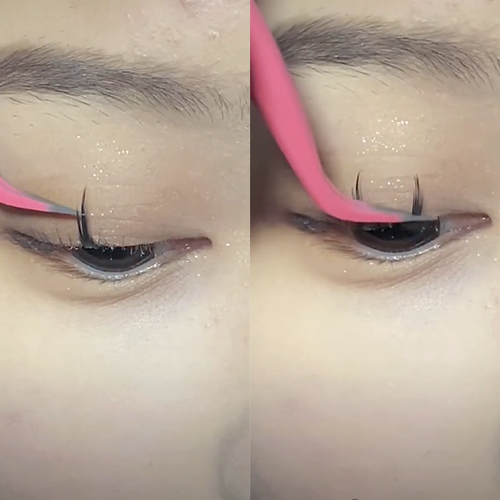 Drip some eyelash glue on a clean surface and dip the band of the coloured falsies into the glue. Attach the first piece to the outermost corner of your eye and underneath your natural lashes.

Make sure that the falsies follow the same direction as your natural ones for a seamless look.

Afterwards, you can apply every other lash about 0.5cm away from each other. Feel free to change the distance between each lash depending on the style you’re going for.

As @sichenmakeupholic said, everyone has a different eye shape, so go ahead and experiment with the lash distance that suits your eyes.

Step 3: Fill in the gaps with lightweight lash clusters 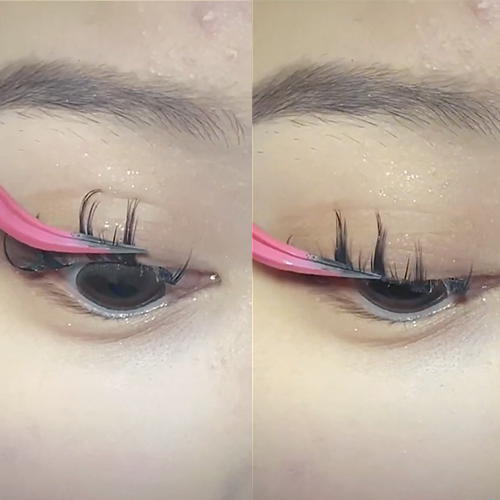 Next, you’ll need to fill in the gaps with lash clusters. You can either continue to use coloured falsies (preferably a colour that is different from the individual lashes you just attached) or you can use a more neutral colour like black or brown.

Make sure your lash clusters are shorter than your individual falsies for an enhanced manga eye look.

Attach them to the gaps between your first set of individual lashes. If you want to lift your eyes even further, we recommend that you only fill in the gaps on the outer parts of your eye.

Step 4: Do the same for your bottom lash line (optional)

If you feel that your eyes have too much going on, feel free to give this step a pass.

However, if you want to give your eyes an added pop of colour and make them look more balanced, repeat the steps you did on your top lash line on your bottom one.

Start with the individual falsies before working on the lash clusters.

With that, you have completed the steps needed for the colourful manga lash look. Here are some looks we have found for you to draw some inspiration from!

You can follow these looks Xiao Hong Shu users have already tried or you could play around with colours and styles that suit your vibe better. 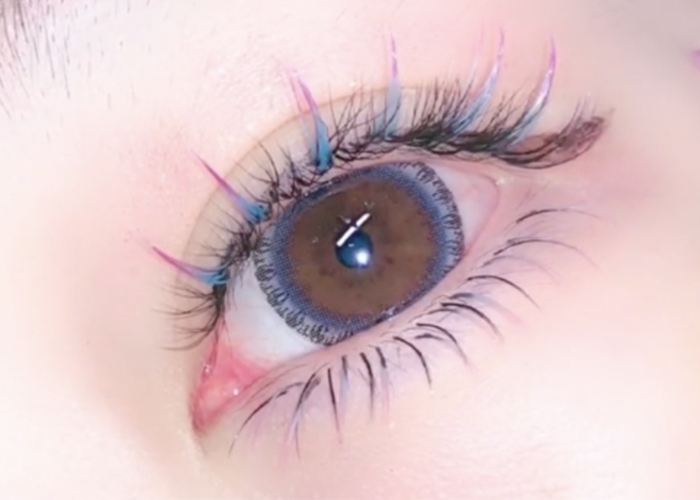 We love how the colourful lashes stand out from the shorter black lashes in an almost natural way.

As the top lash line is donned with a colourful ombre, the bottom lash line retains its natural black colour while taking on the manga lash style. This contrast gives greater emphasis to the colourful falsies on top and opens up your eye perfectly. 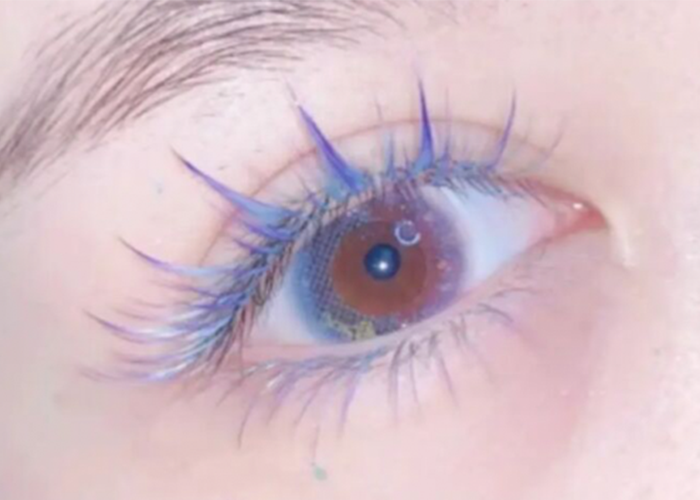 For an extra pop of colour to your eyes, you can try this lash style out. Instead of using black lash clusters for the shorter layer of falsies, this Xiao Hong Shu user used pastel blue ones, which perfectly blend with the longer lashes. It will also cover most of the natural black lashes so you can get the ultimate pop of colour. 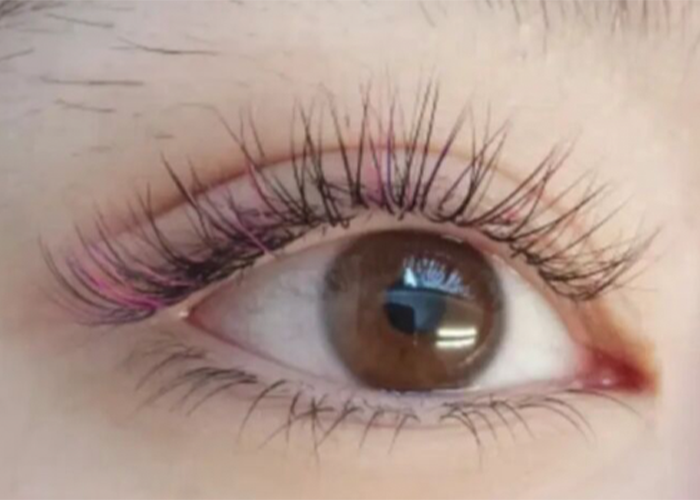 Despite using hot pink falsies, the colour is surprisingly subtle when styled like this. This is because the longer individual lashes are placed close to each other.

By reducing the distance between each individual lash, you’ll be creating a more subtle manga look. This layer of long lashes will look more clustered and since the majority of the lashes are black, your coloured lashes won’t appear too jarring. 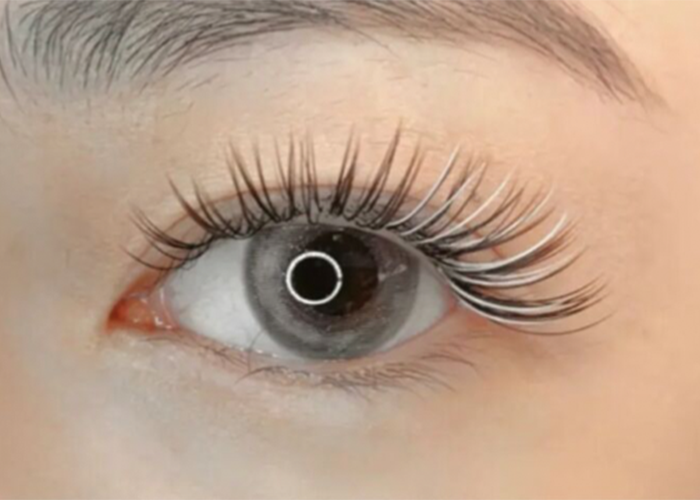 White is such a simple colour that most of us might forget to tap into it when doing colourful manga lashes. Since most of us naturally have black or brown lashes, using simple white falsies will stand out gorgeously.

Plus, if you only add the white lashes to the outermost edge of your eyes, you’ll be giving your eyes a slightly lifted appearance. 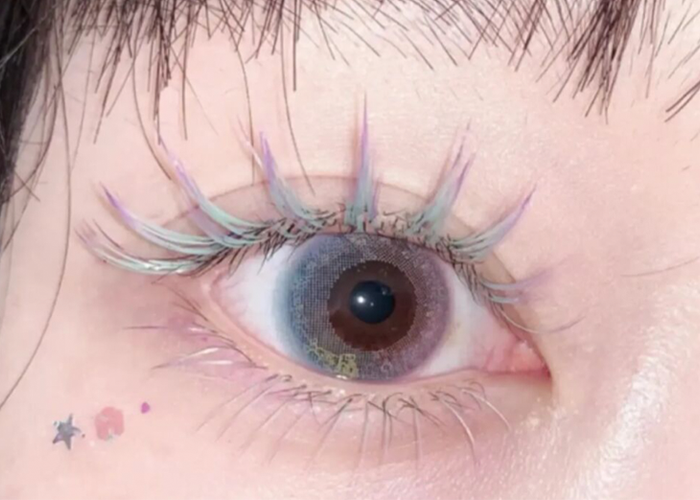 We’re reminded of delicious cotton candy with this choice of style and colour. These mint lashes have pastel purple tips just like the aesthetic cotton candies we see at Pasar Malams (street markets).

Also, since the coloured lashes are scarcely placed on the top lash line, they stand out like spires to give your eyes extra emphasis.

“On the edge” colourful manga lashes 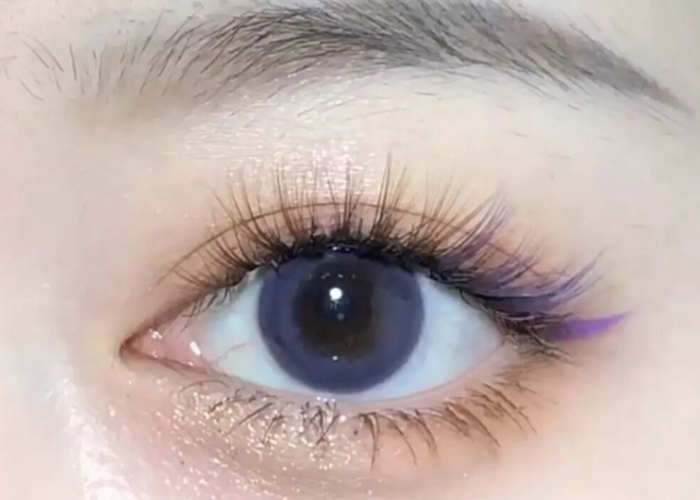 Placing the lashes at the outermost edge of your eye makes it look like your lashes have wings. We love how this Xiao Hong Shu user dressed the edge of her eyes in deep purple falsies, reminding us of butterfly wings.

We recommend you choose a dark colour just like this user, so that the coloured lashes blend with your natural black ones and give you a nice wing effect. 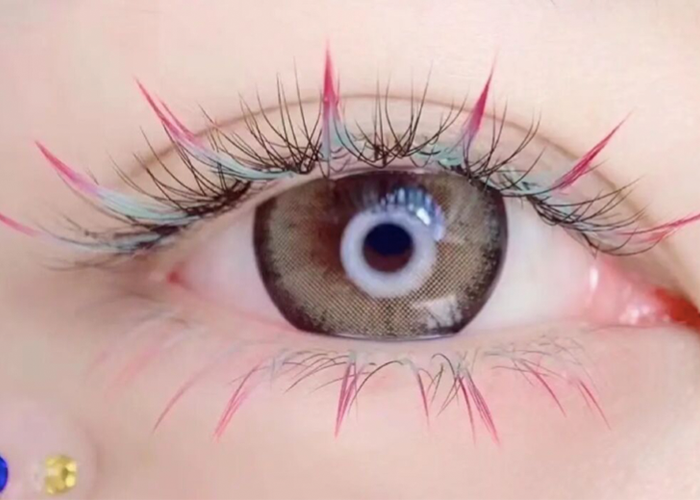 This lash look is similar to the classic coloured manga lashes look but with an extra pop of colour. The coloured falsies chosen for this look are an ombre of two bright and contrasting colours.

Unlike the classic look, which only focuses on the top lash line, donning the bottom opens up your eye more and makes the look more striking. 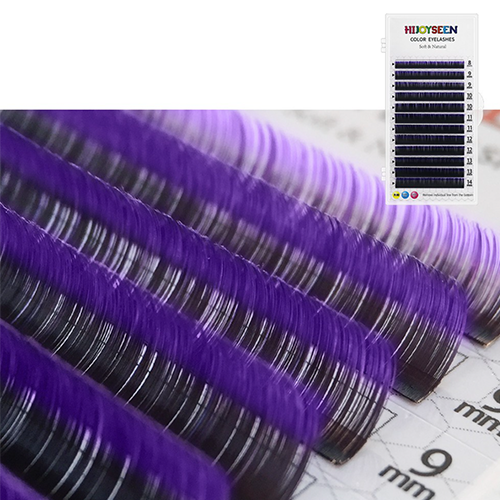 This listing has both gradient and solid-coloured lash options. The gradient options are black to purple, black to red, black to blue, and black to green. Because of the black, these gradients make it perfect for those of us who want a more natural style. 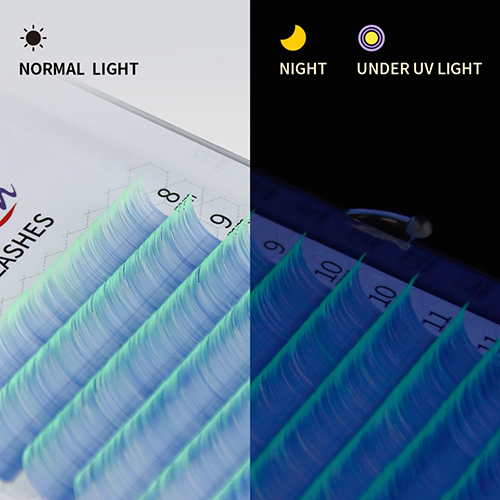 These falsies are perfect for the “on the edge” colourful manga lashes look. With colour options like blue and purple, you can attach darker colours on the outer edge of your eye for the butterfly wing effect.

There are also black and brown options so you can easily cart out your natural-coloured falsies at the same time. 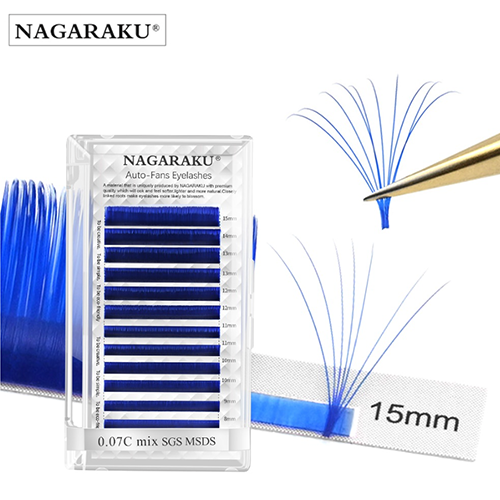 For the girlies who really want that extra glow and “wow” factor, these glow-in-the-dark lashes are perfect for you.

Whether you wear these during the daytime or for a fun night out, you’re sure to turn heads when you don these falsies. There are single-coloured options and gradient options for you to choose from.